“I’m down in the lane now, I’m walking home / Let me walk to the beat of my own metronome,” sings Ben Watt on “Golden Ratio,” off his new album, Hendra. From the sound of things, he’s doing just that: After a decade spent DJ’ing and releasing deeper shades of house on his Buzzin’ Fly label, the Everything But the Girl member has returned to the folky, singer-songwriterly style of his solo debut, North Marine Drive, from 1983.

Somewhat incredibly, Hendra is Watt’s first solo release in 31 years, and to mark the occasion, Watt has put together another installment in his ongoing series of low-key, “deep folk” mixtapes. Volume two, from two months ago, touched upon the likes of Van Morrison, Bert Jansch, Talk Talk, and White Magic, and the new one continues in a similar vein, featuring songs from Joni Mitchell, Shearwater, and Brian Eno. Stitched seamlessly together with “additional found sounds, field recordings, additional original synth,” and Space Echo delay, the mixtapes are a wonderful way of bridging the worlds of acoustic songcraft and DJ culture — and they’re easy like Sunday morning.

“I began the deep folk mixtape series last autumn,” says Watt. “It was a cold November Sunday. I was in the studio fiddling with my old rotary Rane 2016 mixer and suddenly wondered what it would sound like mixing folk music through it as opposed to disco. It just went from there. I’m up to the third in the series. It reflects the mood I am in at the moment. Some might see it as a strange fork in the road after Buzzin’ Fly, but everything for me has always been about finding a truthful and vivid point of connection with an audience — whether on dance floors or in folk clubs. Words, beats and notes — it’s all we have. It’s just a question of playing them in what feels like the right order at the right time, and at the moment, this and my new album Hendra just feels right.” 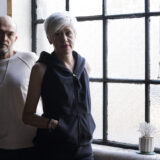 Everything But the Girl Returns With First Album Since 1999

Listen to ‘Trails’ – Deep Folk Mixtape 3 in its entirety right here, and see below for the tracklisting as well as Watt’s upcoming U.S. tour dates. In June and July, he’ll be crossing the country accompanied by his friend and album collaborator Bernard Butler, formerly of Suede; on select dates, he’ll also be reading from his acclaimed new memoir, Romany and Tom.