As another week ends, another round of album streams crops up. Scroll down to find the latest from Jack White, First Aid Kit, the Fresh & Onlys, clipping., and others.

1) Jack White, Lazaretto. “Jack White is streaming his new album, Lazaretto, in full. We’ve previously heard ‘Temporary Ground,’ ‘High Ball Stepper,’ and ‘Just One Drink,’ of course. Now, although we’ll have to wait another week to play with the insane vinyl version of the thing, we can hear the entire record right now. ” — SPIN (via iTunes First Play)

2) clipping., CLPPNG. “The instrumental part of CLPPNG‘s 3-D sound attack is occasionally revelatory, as in the clanging meat-locker of ‘Body and Blood.’ Sometimes the vocals are exactly right, like in ‘Wake Up,’ where literal alarm clock harmonies are overlaid by Mariel Jacoda’s singing. But it’s all a grand experiment, an anomaly, a freak thing.” (via NPR)

3) First Aid Kit, Stay Gold. “Stay Gold is a statement of staying power; a collection of bright, smart, substantial songs that stick around. By the time the [Swedish sisters Klara and Johanna Söderberg] rustle up a bit of countrified rowdiness in ‘Heaven Knows’ — a sure set-closer at the band’s concerts for years to come — they’ve fully reset expectations.” (via NPR) 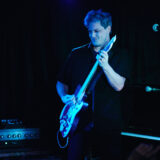 4) Memory Map, The Sky As Well As Space. “Memory Map are a constellation of Bloomington, Indiana all-stars. Guitarist Matt Tobey has another life as folk-punk character and Kimya Dawson collaborator Matty Pop Chart, as well as a staple of pop-punk trio Good Luck. Singer/rhythm guitarist/de facto bassist Mike Dixon used to be in pinched-nose spazz-core foursome Rapider than Horsepower. Steely-armed drummer Josh Morrow splits his time among anywhere from three to 10 trillion other Hoosier bands, including psych-surf trio Triptides, ’70s burnouts Harpooner, and a side-project called the Sands, fronted by former Magnolia Electric Co. linchpin Jason Evans Groth. Guitarist Mike Bridavsky, who’s also in the Sands, owns the Bloomington studio Russian Recording — and, perhaps more recognizably, takes care of one of the most amazing animals on the planet, the magical space cat Lil BUB.” (via SPIN)

5) The Fresh & Onlys, House of Spirits. “On June 10, the Fresh & Onlys will follow 2012’s Long Slow Dance with House of Spirits, a 10-song LP that’s on the way via Mexican Summer. First taste ‘Who Let the Devil’ finds frontman Tim Cohen stewing over the loss of a sinister companion. (Hint: He’s named in the title). Still, Cohen isn’t entirely alone. Menacing bass and sharp drum-machine beats keep him company.” — SPIN (via The New York Times)

6) Ben Watt, ‘Trails’ – Deep Folk Mixtape 3. “Ben Watt has put together another installment in his ongoing series of low-key, ‘deep folk’ mixtapes. Volume two, from two months ago, touched upon the likes of Van Morrison, Bert Jansch, Talk Talk, and White Magic, and the new one continues in a similar vein, featuring songs from Joni Mitchell, Shearwater, and Brian Eno.” (via SPIN)

9) Jose James, While You Were Sleeping. “When the spirit of Nirvana surfaces in a song, the artist paying tribute almost always shares style points with that treasured band. The hair is shaggy, the clothes a little ragged; the lineage unfolds, relatively neatly, from punk to the present. Imagine, however, a jazz-trained vocalist fluent in hip-hop’s vocabulary, laying down a track as ferociously driven as ‘In Bloom,’ but with the negative-ion cool of ‘Heart Shaped Box.’ That’s what New York singer-songwriter Jose James does with his band in ‘Anywhere U Go,’ just one of the fascinatingly recombinant songs on his new album, While You Were Sleeping.” (via NPR)

10) Chrissie Hynde, Stockholm. “[Stockholm] is not a huge departure from the Pretenders’ rock/pop brief. [Chrissie] Hynde says she was aiming for somewhere between John Lennon and ABBA. Hynde’s instantly recognisable voice also has a few surprising guests supporting on guitar, including Neil Young.” (via The Australian)