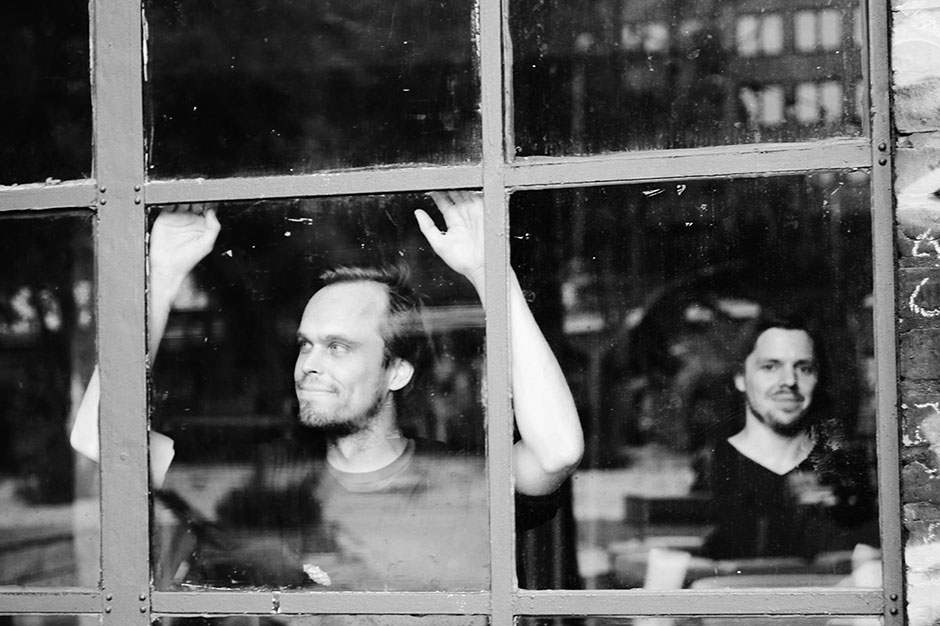 Dub music is often thought of as an almost mystical force, a kind of ghost in the machine, but to hear Greg Haines and Peter Broderick tell it, they came to dub mainly as a way to stop procrastinating. “We had all these tracks,” recalls Haines via Skype. “We had stuff that built up over the years, and it’s so hard to go back and mix that. It felt like a drag for a while, like we had these things, like, ‘Oh, we should really get together and mix that thing.’ Two people sitting over a mouse is just really, really — “

He pauses, as though the word “dull” were too obvious even to merit saying, and Broderick chimes in: “Greg was expanding his studio over the years, with a mixing board and all these live effects that you can process stuff through. Rather than sitting there and minutely adjusting all the details, we took the approach of just getting all the stuff in the session, making a mixdown quickly, and trusting our intuitions.”

The results make for an unusual proposition, fusing haunting song-craft and acoustic instrumentation with analog delay, skeletal drum machines, and subtly psychedelic effects; their debut mini-LP, variously echoing King Tubby, Arthur Russell, and Songs:Ohia, is a little like a campfire viewed through a kaleidoscope. It’s not quite indie, not really reggae, and miles away from the musicians’ classical roots.

The alias they’ve chosen for the project, Greg Gives Peter Space, is a play on the virtual dimensions that dub music opens up, but it also refers to the geographical distance between them: Haines has his studio in in Berlin’s Wedding district, while Broderick recently relocated in the small coastal town of Pacific City, Oregon. The musicians’ relationship “started with me being a fanboy of Greg and writing to him online,” recalls Broderick, who grew up in Oregon. They met for the first time when Broderick passed through Manchester, England — Haines’ home at the time — on a tour with Efterklang. “We just met up at that show, and then we saw each other like you do at different festivals and different shows around Europe for a couple of years,” says Haines. It was once both musicians found themselves living in Berlin that their friendship kicked off in earnest.

Ironically, says Broderick, “It was much easier for us to finish this thing once I moved back to the U.S., because then I would go [to Berlin] and visit, and all of a sudden our time together was so much more precious. We would be much more productive in those limited amounts of time that we had together. We managed to wrap things up in two trips that I made over there in the last six months.”

“That wasn’t the plan at all,” adds Haines. “He was just coming and staying at my place because he needed somewhere to stay. The first day he got here, we talked for an hour or so, and it was like, ‘Wow, should we record something?’ And then it got into this idea that we were doing for Peter’s album, and then he was going to come over for a second time and we were going to work on those tracks a bit. And the second time, it all just came together — decided, mixed, and finished, all in that little trip. At the beginning of that trip, we didn’t even know we were making a record together!”

If dub was a way of getting things done, it was also an excuse for the two musicians to put Haines’ growing collection of analog gear through its paces. Originally, the idea was that Haines would produce songs for one of Broderick’s albums. “But once we decided this is more of a collaborative thing,” says Haines, “that was what was so nice about it. Peter had these songs, and of course they were precious to him, but I was hearing some of them for the first time and just reacting to them. This sounds really terrible, but they weren’t really that precious to me.” Both musicians laugh at this. “They were great songs, but they were also, in a way, just sort of source material, to get all these effects running and have another source that I could try out my studio with. I’m never really working with voice or guitar here. So it was just like, ‘Wow, I wonder what the voice sounds like through that thing?'”

The freeform nature of their studio sessions can be heard in the way the recordings meander, with plucked banjo filliping into a chain reaction of dub delay, and overdriven drum machines lending a tinny, robotic groove. “In ‘The Feeling Shaker,’ that’s just me and Greg sitting with a couple little percussion items in our hands and smacking on the table,” says Broderick. Recording live to tape, meanwhile — a medium that doesn’t allow for edits after the fact — preserved the all-important sense of spontaneity.

“You really are just capturing your mood that day,” says Haines. “There’s something nice and symbolic about seeing the tape rolling next to you and realizing you’re printing this thing. We had one mixdown where we didn’t even know we were doing the final one — or at least I don’t think Peter knew we were doing it. At one point on the album, if you listen really carefully, you can hear Peter saying to me, ‘Oh no, that’s not the right one. I messed it up. Let’s start again,’ or something like that. It’s in the background. I just turned around and shook my head at him, like ‘No, this is the one.’ Sometimes, it’s just about deciding: this is the mix. And that’s what’s so nice about doing it in this style as well: you can’t analyze it too much.”