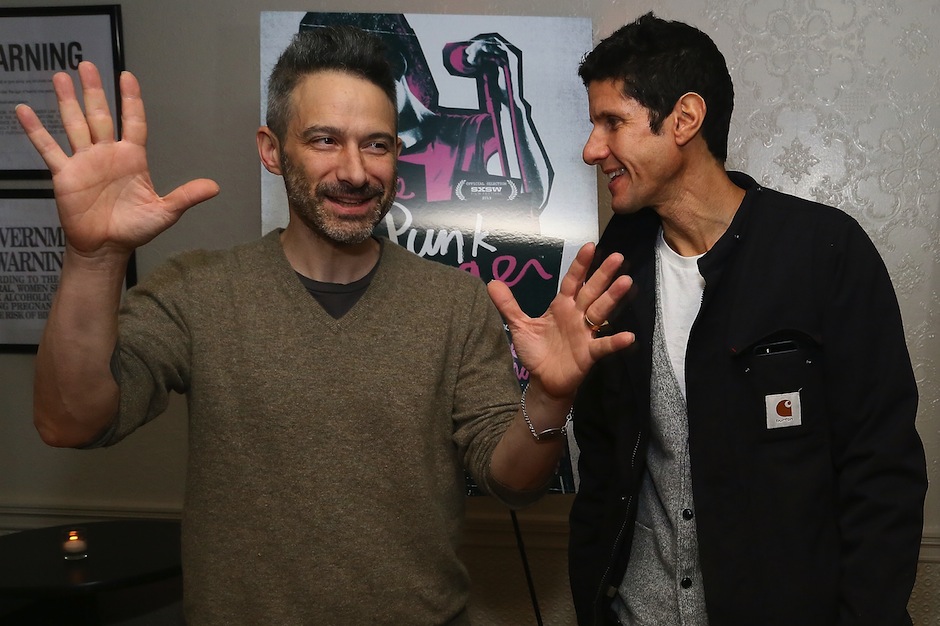 Let’s hope the Thurgood Marshall United States Courthouse has a license to ill. The Beastie Boys’ lawsuit against Monster Energy Drink went to trial in the lower Manhattan judicial facility yesterday (May 27), and although court has come to order, it wasn’t all order in the court. As Billboard reports, the Beastie Boys’ side “smirked” more than once at the absurdities of translating hip-hop culture and the music business into a legal setting, and the judge admonished both teams of lawyers to wrap up their opening statements, already. A sailor suit was also involved.

Beastie Boy Adam “Ad-Rock” Horovitz testified in the case, which hinges on a promotional video Monster Energy put on YouTube shortly after the death of the pioneering rap group’s Adam “MCA” Yauch. The video interspersed images of a snowboarding event the drink maker held in Canada with five Beastie Boys songs — “So What’cha Want,” “Sabotage,” “Looking Down the Barrel of a Gun,” and “Make Some Noise” — and the words “RIP MCA” at the credits.

Yauch’s will includes a no advertising clause, and after a judge threw out Monster’s attempt to pass the buck to the DJ, Z-Trip, who made the “Beastie Boys Megamix,” now it’s up to a jury decide how the company owes the rappers. The prosecutions is asking for damages of $1 million for the song licenses and another $1 million for the “implied endorsement” of the Beastie Boys’ association with the video. Monster, calling the use of the Beasties’ music in the promo video a “mistake,” argues that damages shouldn’t be more than $125,000. (In a statement, the company notes that the clip had fewer than 14,000 views during the short time it was online.)

Along with Horovitz, others on hand were his wife, Julie Ruin-Le Tigre-Bikini Kill singer Kathleen Hanna, plus his fellow surviving Beastie Boys member Michael “Mike D” Diamond, and Yauch’s widow, Dechen Wangdu. The case was expected to take five or six days. And yet, at least on day one, the pomp and circumstance of the courtroom must’ve been an odd fit for the irreverent music icons.

According to Billboard, the Beasties’ side snickered — to our eyes, understandably — when the defense lawyer told the jury, “You’ll learn during the course of this case that ‘dope’ … is a positive affirmation.” And Horovitz cracked a smile or even laughed when explaining some of the basics of the music biz, like what is a single or how the Beasties go about coming up with their songs. Making clear the group’s rarified status, which might entitle it to a bigger award, Horovitz reportedly said his music-making “began in high school” and the Beasties were “very lucky,” selling “millions of records around the world. Very lucky.”

The oddest moment, though, might’ve been when the cross-examination countered the Beastie Boys’ claim they don’t license their music for consumer products, a practice that Horovitz reportedly described as “a form of selling out.” The Monster lawyer showed Ad-Rock a photo of Diamond dressed up like a sailor for a watch advertisement. Asked if that was Mike D in the sailor get-up, a smiling Horovitz reportedly responded, “He sure is.” Somehow, according to Billboard, Horovitz managed to stifle laughter when the attorneys brought a huge, blown-up version of the photo over to the jury box.

Despite all the merriment, the Beastie Boys are no strangers to their legal advisors. Last year, they (counter)-sued toy company GoldieBlox for using a parody of their song “Girls” in a commercial, eventually settling out of court. And in 2012, on the eve of Yauch’s death, the same company that more recently sued Frank Ocean hit the Beastie Boys with a copyright claim involving decades-old music.