The defiant U.K. outliers discuss the formation of their wondrous latest LP, 'Present Tense,' and what it is to chop off the foot to save the body 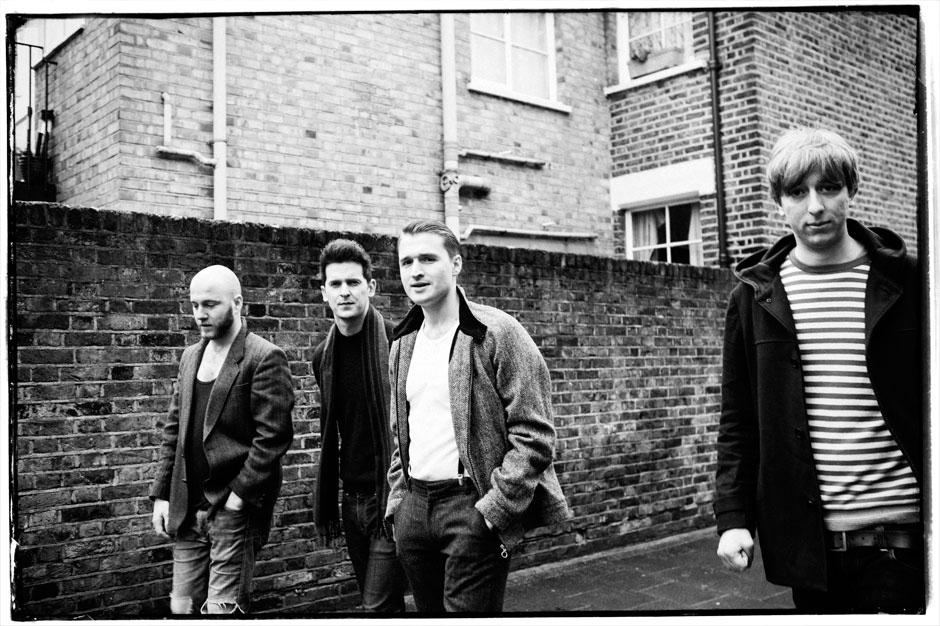 Last month, truly uncategorizable English outfit Wild Beasts arrived in the U.S. for a pair of sold-out shows on both coasts, in support of the magnificent LP they’d just released that week: Present Tense. The reception was ecstatic. Though the Kendal-bred foursome have been uncompromising in their approach from the beginning — perhaps most audible in the vocal trapeze act between dual frontmen Hayden Thorpe and Tom Fleming — their latest (and follow-up to 2011’s Smother) found them coming together again after some time apart to, with studio help from Alex “Lexxx” Dromgoole and Brian Eno protegé Leo Abrahams, craft their best yet: a singularly spartan set of software-driven pop that sounds like them and them alone. The morning after they garnered encore chants of “Wild Beasts, Wild Beasts,” at the Music Hall of Williamsburg in North Brooklyn, they sat down with SPIN for breakfast before taking off to entrance Californians in much the same way. And, as of yesterday, they’ll do it again this summer, when they return for a handful of Stateside dates in July.

You guys were recently recording some B-sides separately in London. How did that go?
Hayden Thorpe: It’s kind of a funny environment: knowing that there’s a gap between what a label can afford and what a band wants to be able to do. So Red Bull set up a studio in different cities. We were turning up and there was model casting. And to get from the live room to the control you had to walk through these super models.

Tom Fleming: This is the thing about being in a band. You think because you stand onstage it looks glamorous, but when you get up close to musicians, we tend to look like little scruffy hobbits. Whereas, these people are models. You really become aware of your place in the order. It’s kind of an image-making exercise. I think they’re leveraging that people will still like music against being a massive brand. It’s not something we’d be comfortable with a few years ago, I think. And now I think the scenario has changed a lot.

How much did you record?
Fleming: Three tracks, which is quite a luxury, actually. Normally it’s just bang, bang, bang, put it out.

Were these songs that you had written at the same time you were writing what would become Present Tense?
Thorpe: Two we worked on in the studio and they just became off cuts. So they were kind of aesthetic signposts. Sometimes, what happens is you start out with these early songs and you get really excited about them. And then all of the things you’re excited about — you just kind of tear off the ribs. And they’re left without any flesh. You’ve just taken everything from them. So we just went back and dressed them up a little bit. And another is a new song, but it’s a sequel to an older song. B-sides are cool. They’re a forgotten art, really.

Fleming: It doesn’t have to be so much of an aesthetic statement. You’re just kind of like, “Let’s have some fun.” Which can be nice.

But is an aesthetic statement something you’re typically cognizant of when you begin writing?
Fleming: Yeah, absolutely. Especially when you took some time out like we did. You have to come back with something that demonstrates learning. There’s a certain amount of deliberateness to our records. It’s important to put your foot through the door a little bit and say, “This is how we sound now.” And to show that you’ve got your ear to the ground as well. We know we’re not working in a vacuum. I think it’s important to show that — to draw stuff in.

Did you feel like you knew what you wanted to accomplish after you came back together, after taking some time off? How do you articulate what you’d learned collectively?
Fleming: I think we did. I think we got on the same page very quickly, in terms of what we wanted to do. I think, as usual, what we wanted to do was a little far from what we ended up doing. I think it was natural to incorporate all the electronics and the lyrical tropes to be a little more straightforward and more direct. I think we’re at a beautiful point where the record we needed to make was also the record we wanted to make. I think we’ve maybe been a bit willful in the past. Like, Smother for example: Looking back, it’s probably our most successful record. It’s deliberately kind of a quiet and delicate record. I think we felt like we were naturally going to the place that I just wanted to go.

Ben Little: Smother was so soft, wasn’t it? I think the words we used when talking about the record we wanted to make were “balls out.” And more “direct.”

Thorpe: There was a sense of it being an open goal. It’d be harder to miss the target because we’ve been at times quite awkward. Or maybe not easily palatable, and people had gone with us with that. And it felt like, now we want to be palatable. Not in a softening our edges way, but in a, “We want to write good pop songs” way. We want to stop using the words “art” and “guise” to mask the fact that you can’t write a decent pop song. I think we’ve always applied ourselves to the craft of writing melodic, concise songs but it felt like maybe that craftsmanship would come off with a kind of personal maturing. Like, “Fuck it, I don’t care if people think this is dumb.” It’s trying to cut the intellectual out a bit. Sometimes it’s braver to just to be more guttural and primal.

To be less cerebral?
Thorpe: I don’t know what people want. There was a sense with Smother that, “Oh man, if we had this kind of tune right now that would be the one.” Some of the songs came about quite bizarrely with that in mind. To craft something that can function both as a simple, effortless pop song that’s kind of weightless — but to also have some greater gravity. That’s the Holy Grail.

Fleming: It was a great pleasure drawing in more stuff into songs — like, shorter, tighter song forms. It’s a lot of fun. I think that’s probably our job. Music is music. Genuine, genuine innovation doesn’t really exist. It’s all about recombination and juxtaposition. And taking stuff apart and putting it back together wrong. What we should be doing is putting stuff back together in a different way. This record is all about taking away and stripping it back. There’s a lot of sounds on the record that are all quite isolated, they’re all quite clean. You hear a synthesizer or a sample and it’s in the part, and then it’s out again — that idea of production instead of layering softly. And I think that goes in a more general way — I hate the word, but, artistic sense — to put stuff together in a bit of an ugly way. Making it kind of angular rather than rounding it all off. Making songs repeat a bit too long or making a song a bit too short. That kind of thing. To unsettle a little bit. I think while we do want to write good pop songs, I don’t think we’re in the business of reassuring and reinforcing what you hear on the radio, which is reinforcing a cozy world, which we don’t really get on with.

How do you maintain a lot of the core elements of who you guys are while also stripping things back and entertaining your impulse to be more palatable?
Fleming: I think, like Hayden was saying, we’re getting to the point where it’s obvious what we need to do, and it’s obvious what these songs need to be. We’ve got this song and we’re like, “It’s there, the song is there. All we need to do is treat it right.” That’s why I think this record took a bit of time. We thought ourselves into a corner with it. Then we had to just, say “Okay, we’re going into the studio now.” I think in terms of reconciling it’s very difficult to do that in theory. I think we have to reconcile it in practice. And also we talk as if we communicate well, which we don’t. A lot of it just kind of happens.

Thorpe: There’s a lot of superstition. It is a superstitious business. It’s a business that goes on a promise. And one person’s idiot is another person’s genius. You kind of always try and toe that line and not get your head turned as well. You can hypothesize and theorize about what makes us work and what turns people and what doesn’t. But I think we’re lucky enough to get into a position where it was actually our strengths that were working for us. It wasn’t that the compromises were paying off. It was the resolute decisions we made that paid off. And that kind of made it easier. The hardest part about creating work, especially in an industry that’s so saturated now, is choosing what’s useful. I think we did have to drown a few babies to be honest. And be like, “This is kind of decorative,” and “This is tacky flourish.”

Fleming: It’s like chopping off the foot to save the body. I think it’d be fair to say we’ve managed to distance ourselves from the British indie bands. There’s so many bands that come under that umbrella and I think sonically we’ve made a break from that. It’s the law of difference. The first person you resemble you love the most.