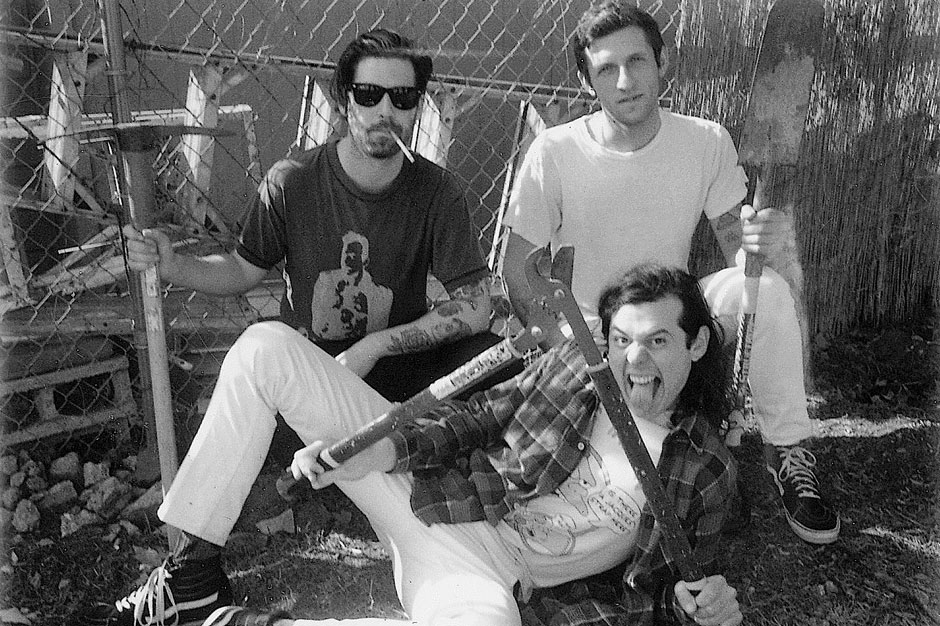 Who: Scraper first took shape in 2011, when frontman Billy Schmidt joined forces with bassist Noah Charnow and drummer Chelsea Woodard at Wizard Mountain, a house named after the tape label of resident Kyle Crawford. Said label went on to release the San Francisco trio’s demo, a scrappy set of invective punk recorded live in the basement that garnered the interest of label alum Ty Segall. For his part, Segall produced and released the band’s first proper EP on his very own Drag City imprint, God? Records. Since then, Moses Rios has replaced Woodard on drums, and Scraper has unleashed its eponymous debut album, a snarling platter of mid-tempo, knuckle-dragging punk bombast that appeared last December via the newly minted Cut-Rate Records.

Observant Skating: Aside from Wizard Mountain, Scraper have a fondness for other cryptically named, subterranean haunts. “The meat locker was a better skate,” Schmidt says wistfully of the skateboarding route to Scraper’s old rehearsal space, a converted walk-in freezer three stories underground. Standing outside the group’s new practice space in the Tenderloin district, Schmidt explains how he sources lyrics for his songs, which read like the script to a low-budget horror flick. “Skating around, I see people projecting desperation into the street,” Schmidt says while gesturing towards a homeless encampment. “Those things trigger songs.” The headquarters for various tech start-ups also fill out entire blocks nearby, and the stark contrast colors Schmidt’s perspective. On record, he decries the ongoing creative exodus to Los Angeles, offers anti-romantic screeds like a guttersnipe realist, and advocates drunken skateboarding, too.

Shockwave Genesis: Schmidt’s lyrical faculties stem from a free-associative bent first showcased in Shockwave, an experimental 2011 video made by Crawford. “Shockwave was the first time we realized that [Schmidt] could really make art with stream-of-consciousness,” Crawford says. Shot in the Wizard Mountain basement, the piece splices Schmidt’s improvised raving with a disorienting horror montage. Shockwave was screened sporadically and manufactured in short runs on VHS, but Crawford plans to adapt the project for onstage performance. He’ll mix video feeds live while Schmidt improvises responses to the mash-up in front of an audience.

Live Kicks: Scraper gravitates towards warehouse spaces and dingy clubs. The more like Wizard Mountain’s basement or that sweltering meat locker, it seems, the better the conditions are to perform. Live, Schmidt blurs the distinction between sputtering lyrics and sneering banter, babbling incessantly whether the band kicks in or not. At a recent gig, Schmidt jostled with the foremost crowd members and cried out, “A kick in the face reminds me of love!” The singer’s volatile stage presence and flippant guitar-work is reflected on Scraper’s debut full-length, thanks to producer David Fox, who also launched the Cut-Rate imprint. “All I wanted to get from the recording was that same energy that Scraper had live,” Fox says.

Tech Tension: Scraper’s seething mania is part of a greater furor amongst local musicians. San Francisco boasts the country’s most prohibitively expensive housing market, a reality that spurred Ty Segall to move to Los Angeles. Thee Oh Sees’ John Dwyer, a Bay Area resident of 16 years, followed suit late last year, after he exhibited an art show titled “Landlord Apocalypse.” Beyond the high-profile names, entire households of Schmidt’s friends have up and left, but the city, with all of its strife, feels essential to Scraper’s music. Schmidt positions the band as part of a greater backlash against the widening inequity. “Some creative response will come out of this,” he says. “There’ll be a spurt of angry bands.”