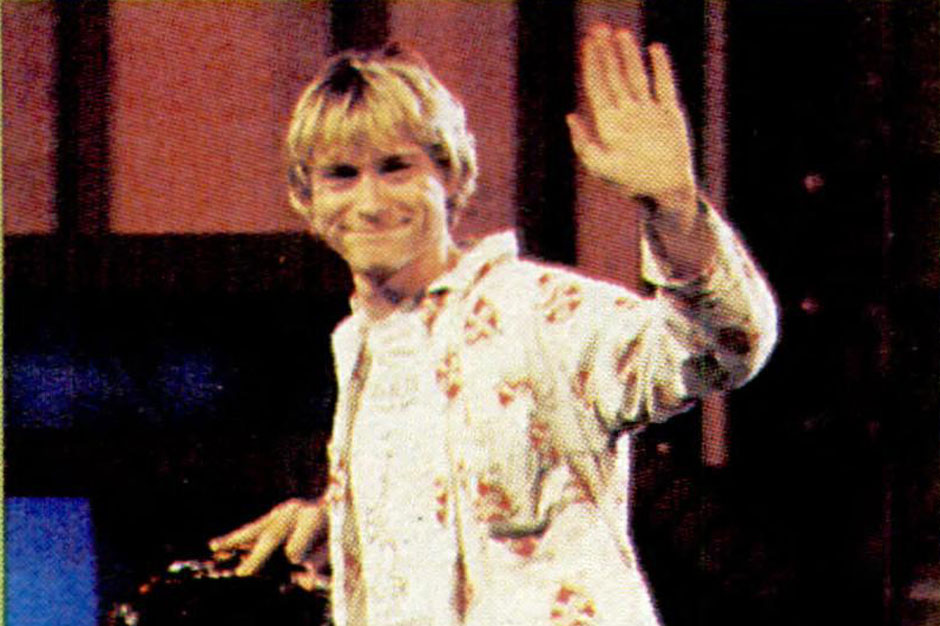 I still prefer to believe that Kurt Cobain’s life was saved by rock’n’roll. I picture him wearing his favorite T-shirt, the one with the image from Daniel Johnston’s Hi, How Are You on it, or covering any one of the three different Vaselines songs Nirvana performed, or hard at work on the liner notes to a Raincoats reissue his own success prompted, or bringing Curt and Chris Kirkwood onstage during the MTV Unplugged gig to play two songs from Meat Puppets II. He seemed to best love punks who sang from the provincial recesses of rock’s domain, for self-comfort more than confrontation. And he never left his touchstones obscure, clueing in other young isolates in need of a personal shield of sound.

Cobain first claimed our attention 30 months ago — I measure the time in months because after Nevermind, rock began evolving month-to-month again, new guitar bands claiming public attention with dizzying regularity. 1991: The Year Punk Broke; I’ve always loved the sound of that. Nirvana accomplished it, with a fluke MTV hit that permanently altered the attitudes of record companies toward a new generation of “alternative” artists. It would not be ridiculous, then, to make a second claim: Kurt Cobain’s life saved rock’n’roll.

Unfortunately, the rock’n’roll that saved Cobain’s life and the rock’n’roll Cobain’s life saved turned out to be beasts of a different nature. You can’t bring the sensibilities of a Vaselines fan before the mass media and a vast audience and expect understanding: Corporate rock is fundamentally about the open and blunt exercise of power, while indie rockers have always favored exclusivity and an aesthete’s sense of reserve. Suddenly, there was grunge, a genre no self-respecting person could admit belonging to. Suddenly, Kurt Cobain was leading the life of Axl Rose. Cobain couldn’t sort it all out, but who has in these past 30 months? Pavement? Riot Grrrl? The puritanical (too easy — let’s say, bohemian genteel) indie values so many of us partake of casually were his only code; maybe they didn’t kill him, but when it counted they didn’t help keep him alive.

Psychologically troubled from adolescence, a drug user, seriously depressed, and in constant stomach pain, there was death dwelling in Cobain for years. Watch how he sings “Where Did You Sleep Last Night?” at the end of Unplugged, shivering and visibly drawing a final breath. No one who listened to In Utero, an album turned muddy and sluggish by unsifted pain, feels surprised now.

In the weekend following the discovery of Cobain’s body, I found myself turning not to In Utero, testament to a dead end, but to Hole’s Live Through This, in every way a breakthrough. Live Through This has an unapologetic power that manages to synthesize corporate rock aggrandizement and the indie delicacy of, for instance, a Young Marble Giants cover. Courtney Love found a way to artistically and personally transcend the dilemmas Cobain finally couldn’t overcome — and this is the moment to ponder that accomplishment.

I say that because more than anything, Nirvana’s mangy blond embodied all out confused and contradictory and ultimately unsupportable notions of the male rocker, our oh-so-punk models of what rock is supposed to be about, the kill-rock-star ethics we demand from inside our purist fan communities. In the wake of his death these ideas need modifying more than ever, along with all the other values formed in the indie-only years. The real tragedy of Cobain is that the music that brought his life together came cased in a rhetoric that wasn’t strong enough to preserve him when the registers started ringing.

In these last 30 months, the rock of our generation has secured unprecedented possibilities for itself. Couldn’t we celebrate even a little bit? But it’s too easy to just remember all that endures in Nirvana’s music. Let’s try to also think about why Kurt Cobain bogged down, and whether we’re sinking in it too.