"Kick the Bride Down the Aisle," "Earth Is the Loneliest Planet," and many more 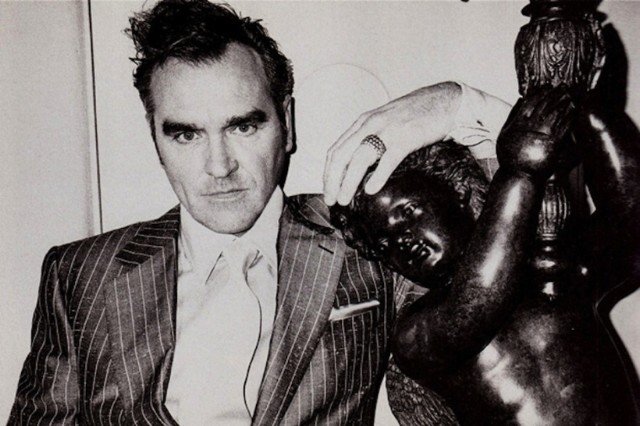 No one will ever be better at the art of being Morrissey than Morrissey. First, he gives his new album the title World Peace Is None of Your Business, which may or may not be a reference to his Nobel Peace Prize gig last year but definitely won’t be easily forgotten. Now, through usual mouthpiece True to You, he has shared a track list that might even beat that.

Currently set for a July release via Harvest Record and Capitol, the follow-up to 2009’s Years of Refusal will include some pretty remarkable song titles. Oh, sure, there’s the title track, but from “Neal Cassady Drops Dead” and “I’m Not a Man” to “Earth Is the Loneliest Planet,” “Kick the Bride Down the Aisle,” and “The Bullfighter Dies,” there’s a lot to chew on here before we’ve heard one note of music. Even the less melodramatic titles, like “Kiss Me a Lot” or “Oboe Concerto,” can start to seem pretty wild once you start looking at them in this context. (Love his use of “a lot,” for starters, and bear in mind he already has a song called “Let Me Kiss You.” Do you think that oboe concerto is going to be literal or just a figure of speech?)

The 12-song set was produced by Joe Chiccarelli, who has worked with the likes of Beck and the White Stripes. Morrissey recorded the album in France with his live band consisting of guitarist Boz Boorer, guitarist Jesse Tobias, bassist Solomon Walker, drummer Matthew Walker, and keyboardist Gustavo Manzur. Get ready to request “Mountjoy” when Morrissey heads out on tour starting in May — the youngest was the most loved.

Morrissey’s World Peace Is None of Your Business track list: