Seattle Police release a photo of the paper, which accuses her of "doping and whoring" 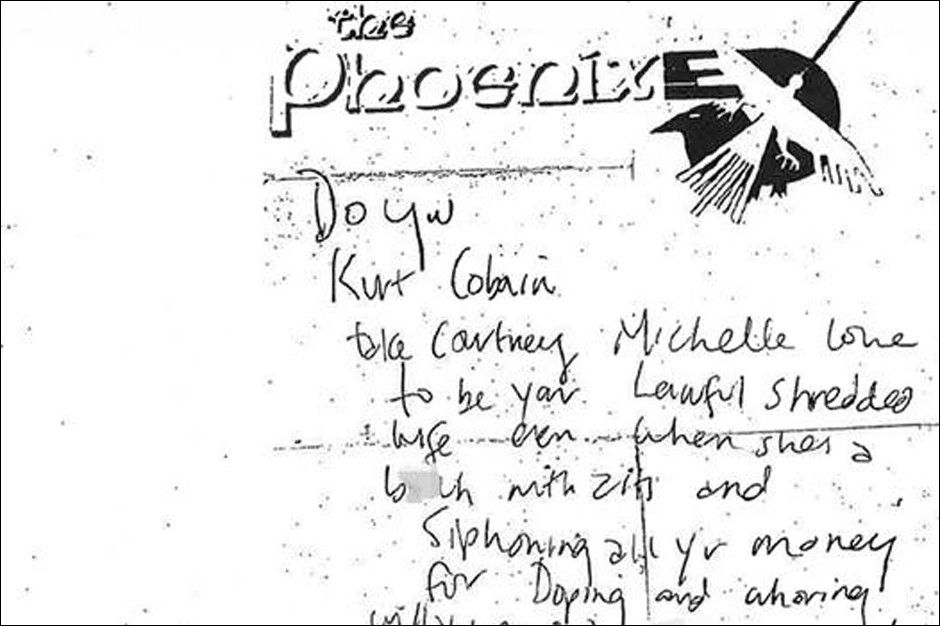 Seattle Police continue to release photos from the scene of Kurt Cobain’s death at the media’s urging. The latest, obtained by CBS via a public information request, is a never-before-seen, oddly cropped image of what authorities claim is a note found in the Nirvana leader’s wallet following his April 5, 1994 suicide. Sadly, the roughly scrawled message takes aim at Courtney Love, mocking the famously troubled couple’s wedding vows.

“Do you Kurt Cobain take Courtney Michelle Love to be your Lawful Shredded wife,” it begins, “even when she’s a bitch with zits and siphoning all yr money for doping and whoring.” There’s more but what appears to be a photocopied version of the note cuts off at that point, as seen above. The timing is eerie to say the least, considering Love released a new solo song called “Wedding Day” early Tuesday (the same day).

In anticipation of the 20th anniversary of Cobain’s passing, SPD revisited the controversial case but found no evidence that would change the ruling of death by self-inflicted gunshot. (Many conspiracy theorists have toyed with the idea that Love was somehow directly responsible.) They wound up releasing photos of various objects gathered at the scene, and another batch later on, partly as long-dormant rolls of film were being developed.

On Monday, April 28, SPD released a detailed public report on the recent updates. Cold case detective Mike Ciesynski reviewed the new evidence and arrived at some new conclusions, though the same outcome. He was able to reasonably prove that Cobain himself bought the shells, for the shotgun that would kill him, three days before the tragic incident. The musician reportedly took a cab into town in order to purchase ammunition, then returned.