This was originally published in April of 2010.

On Wednesday, April 8, 1994, the body of Nirvana frontman Kurt Cobain was discovered at his mansion outside Seattle, Washington. The coroner's report claimed he had killed himself three days earlier. As an anniversary memorial, we are publishing this gallery of our favorite Cobain images from the archives of SPIN magazine.

The above photo comes from our April 1995 issue, in which we honored the 10th anniversary of his death by asking musicians such as Iggy Pop and David Bowie to tell stories about Kurt. This intimate shot of the artist with his newborn daughter, Frances Bean, appeared courtesy of Courtney Love.

• Courtney Love: Where Kurt Cobain Would Be Today: "We'd probably live on the Upper West fuckin' Side now and have three fuckin' kids."

• What If Kurt Cobain Didn't Die? by Chuck Klosterman: Klosterman's theory about what the rock god's future could have held. 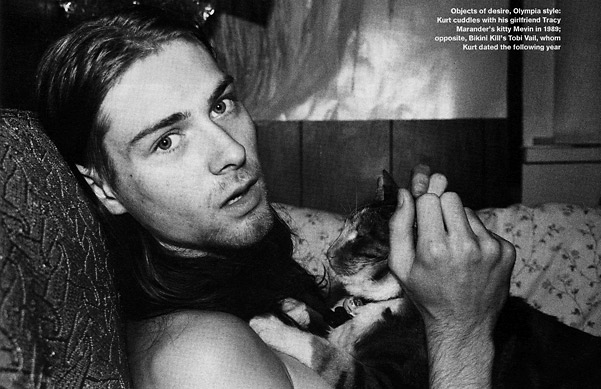 Cobain snuggles with then-girlfriend Tracy Marander's cat in 1989, in her Olympia, Washington, home. This pic was featured in our October 2001 issue, which looked back on the influence of Nirvana's chart-topping album Nevermind 10 years after its release. 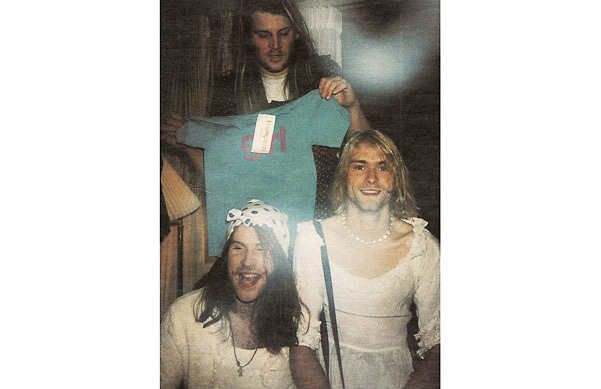 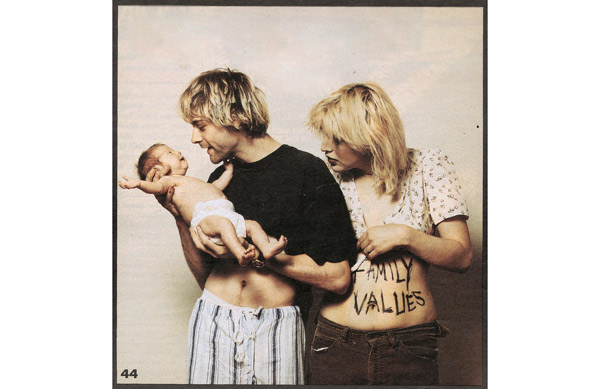 In our December 1992 issue, at the end of Nirvana's breakout year, Kurt's longtime friend and Sub Pop cofounder Jonathan Poneman sat down with Cobain and wife Courtney Love for a chat about various topics, including the couple's daughter, Frances Bean. 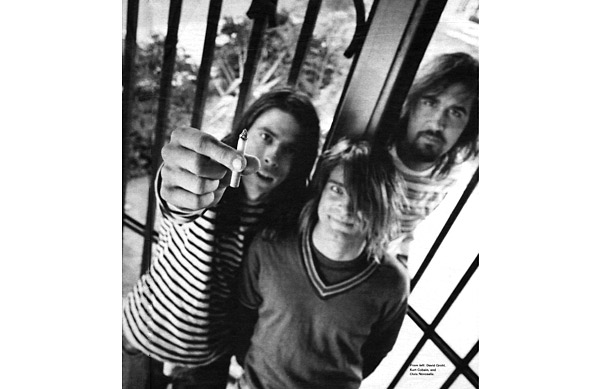 In SPIN's January 1992 issue, Lauren Spencer profiled Nirvana as the music video for the lead single "Smells Like Teen Spirit" ruled MTV. Here drummer Dave Grohl offers up a smoke as Cobain and bassist Krist Novoselic pose for the camera.

5. Coming Down to Earth 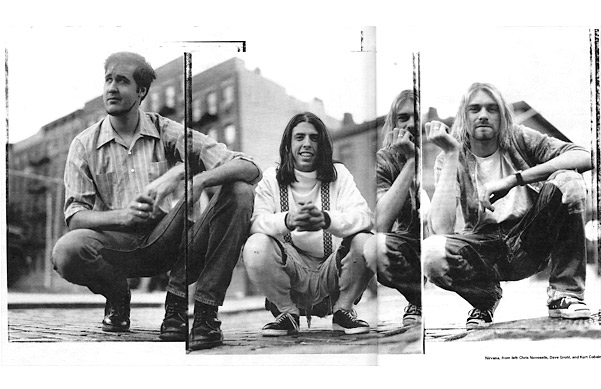 In SPIN's October '93 issue, just six months before Cobain's death, writer Darcey Steinke sat down with the singer to discuss his life, music, and the fame surrounding Nirvana: "I miss being able to blend in with people," he said. "It's just been lately that I could even handle being recognized." 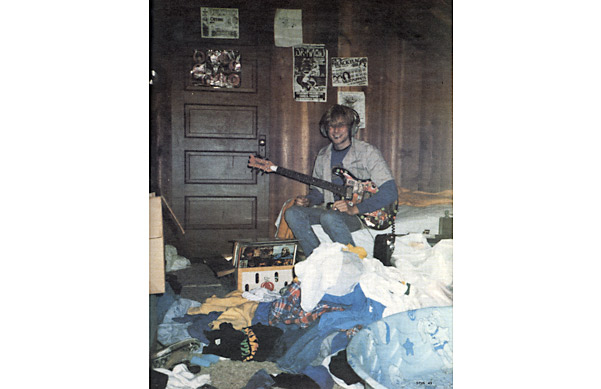 This shot, from our April '95 issue, shows a 15-year-old Cobain refining his craft. 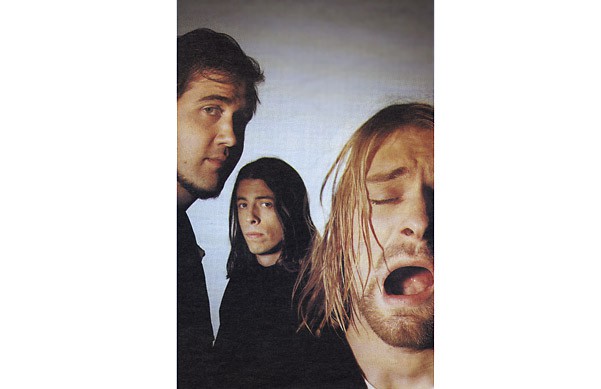 Nirvana mug for SPIN's October '93 issue, which checked in with Cobain and band about their growing success.

8. Men in the Mirror 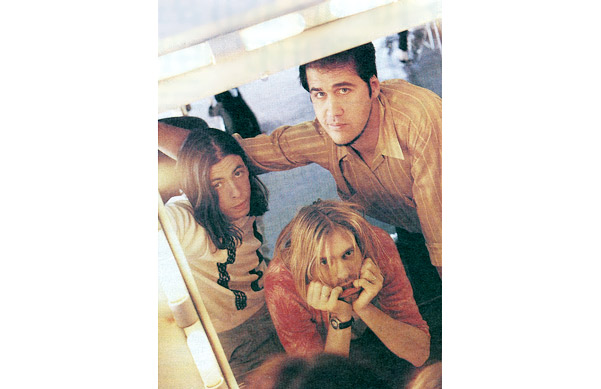 Nirvana pose during a photo shoot for SPIN's October '93 issue. 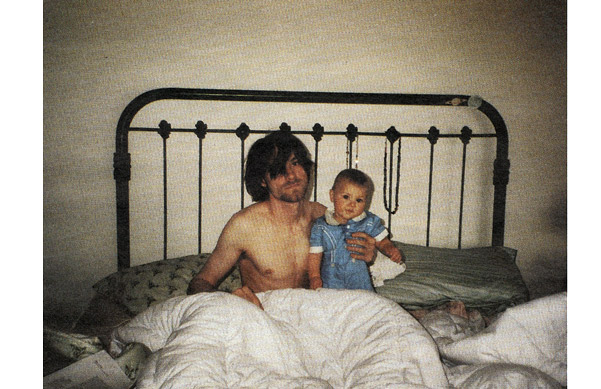 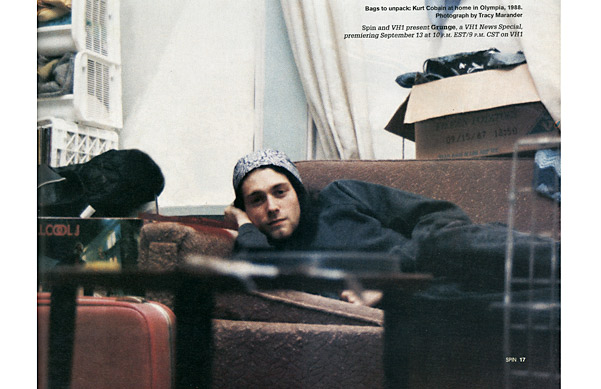 This pic — which shows Cobain in 1988 in his Olympia, Washington, apartment — appeared in our October 2001 issue. 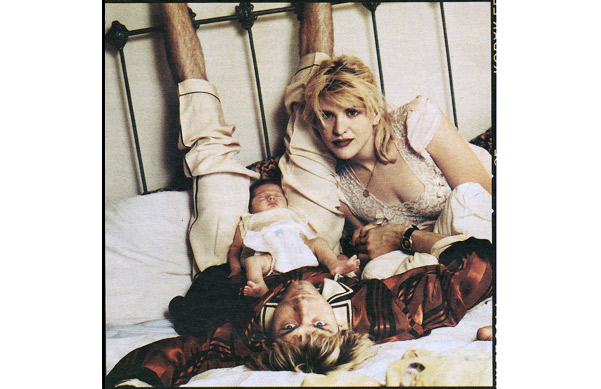 In SPIN's December '92 issue, Nirvana were hailed as Artists of the Year. Nevermind had sold millions and knocked Michael Jackson from the top of the charts, "Teen Spirit" had become the year's bona fide hit, and "grunge" had turned the music world upside down. 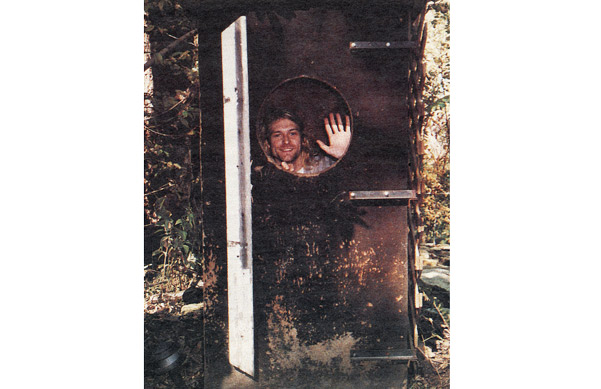 Cobain seeks the therapeutic benefits of William S. Burroughs' Orgone Box during a visit to the Beat writer's Lawrence, Kansas, home in 1993. This shot, courtesy of Courtney Love, was featured in our April '95 issue. 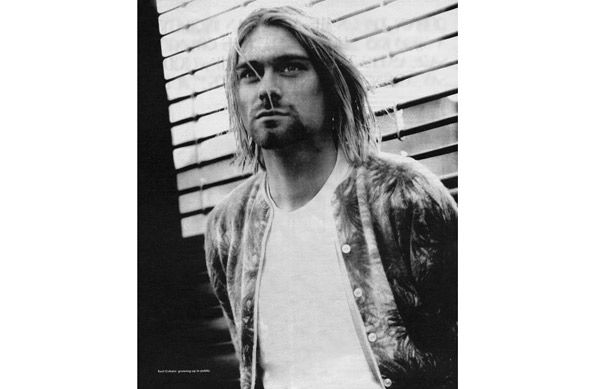 As Chris Norris wrote in our April 2004 issue, Cobain "still haunts us like no other rock star." 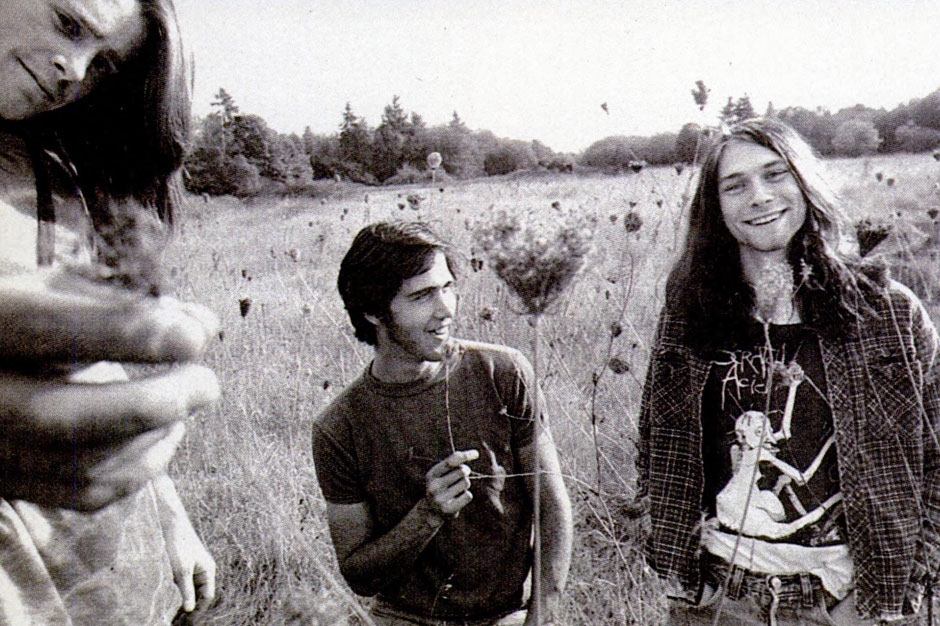 This photo, taken circa 1989, catches Cobain and Novoselic in the days before Dave Grohl, alongside Bleach-era drummer Chad Channing. 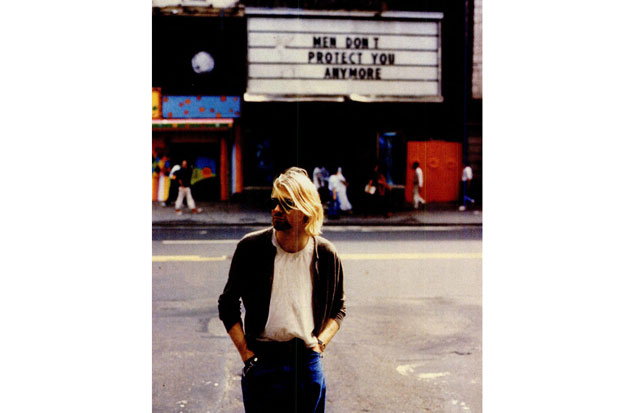 Cobain poses on the streets of New York City in 1993. 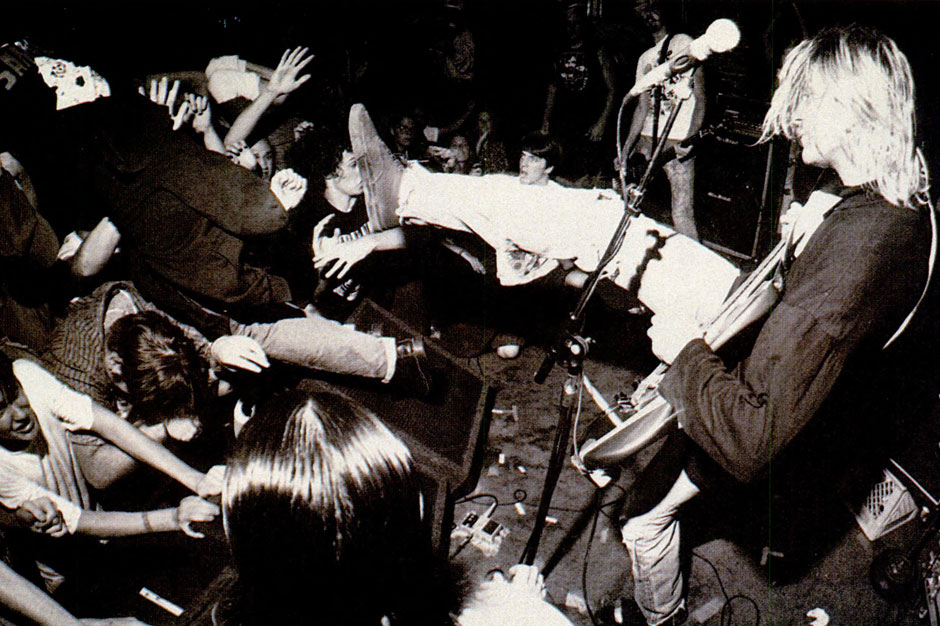 This live shot appeared in SPIN's June 1994 issue, in which Gina Arnold wrote, "We'll never know how many lives [Cobain's] music has actually saved and will continue to save, but I bet you anything it's more than a few." 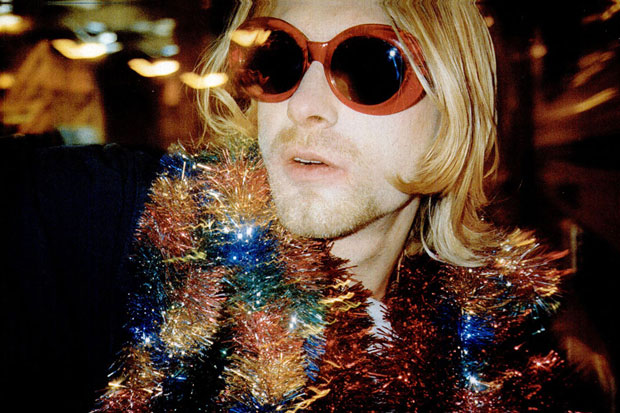 Here's Cobain in his Ciao! Manhattan phase, circa 1993. This photo showed up in the April 2004 issue of SPIN. 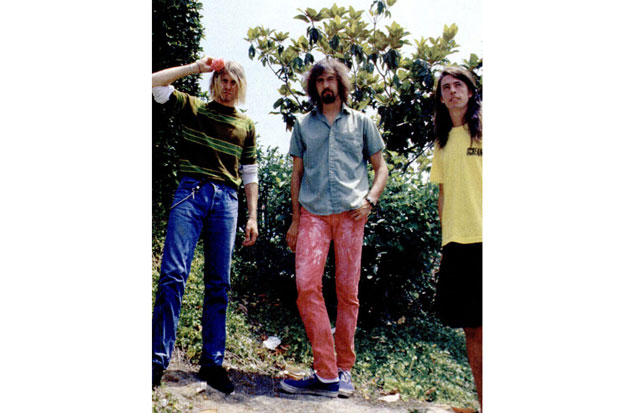 Nirvana at the "Smells Like Teen Spirit" video shoot, 1991. 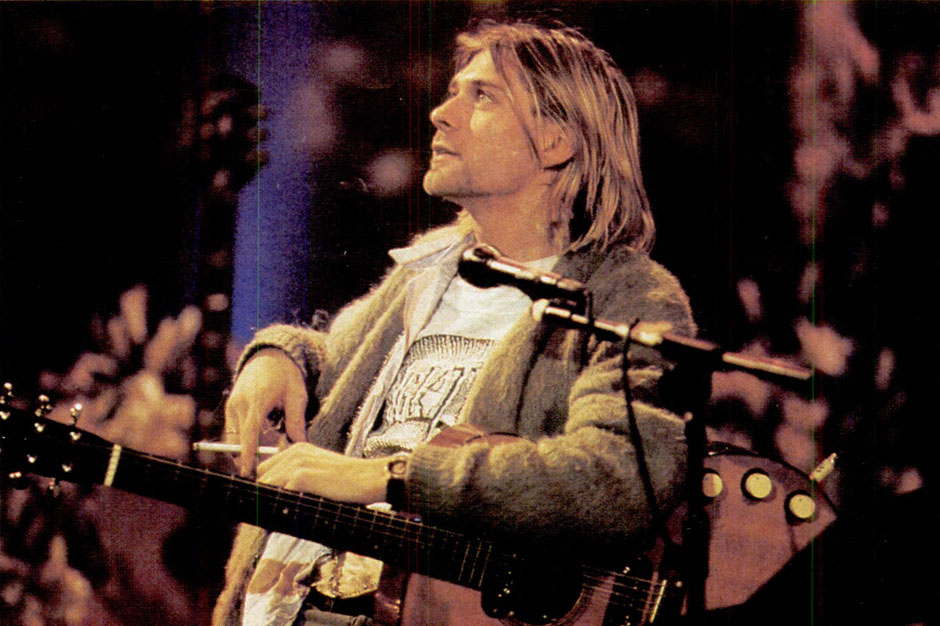 This 1993 photo finds Cobain at the taping of Nirvana's legendary MTV Unplugged performance. 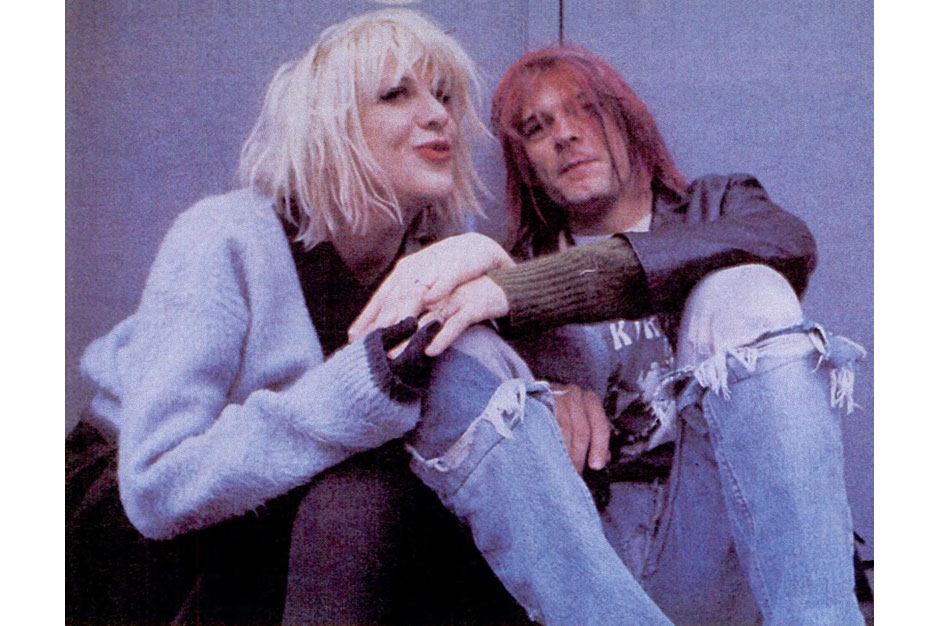