Guardian reviewer criticized his appearance and the "numbing" three-hour shows 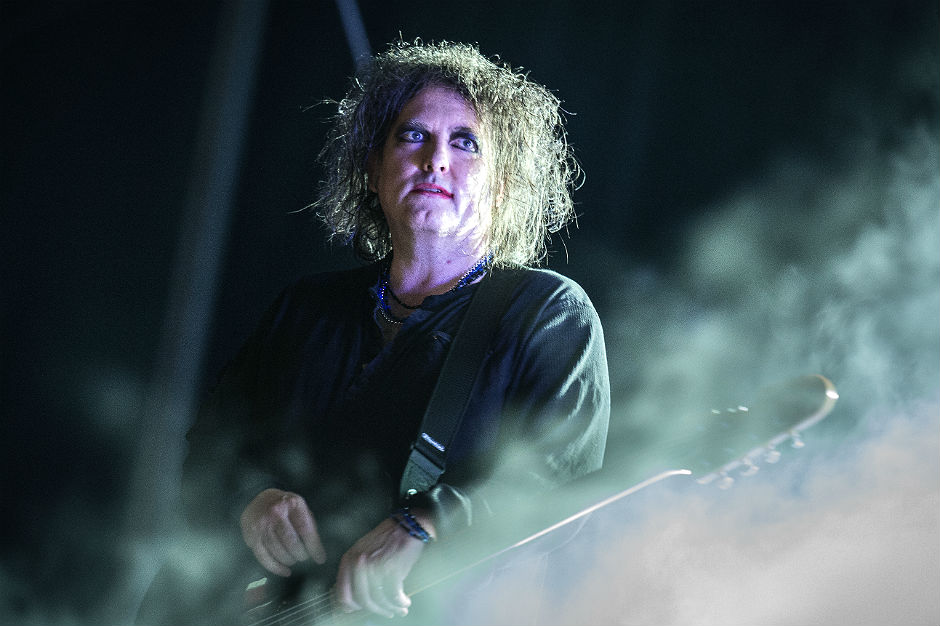 Wondering how to get a personalized tirade from Robert Smith? Try the following steps.

First, write a mixed review of a Cure gig, say it went on too long, and mention that the singer, 54, looks “scary” when shown in close-up on the video screens. Second, when a commenter disagrees with said review, claim the band read your work and actually agrees with your criticism. After that, simply wait, and the all-caps open letter will arrive imminently.

That’s the condensed version of what happened between Guardian critic Caroline Sullivan and Smith. In her review of the Cure’s first of two Teenage Cancer Trust charity shows at London’s Royal Albert Hall, she quotes Smith saying it was “scary” how many 45-year-old fans were wearing black nail varnish at the show.

“But not as scary, we soon discover,” she writes, “as Robert Smith in full fig: big-screen closeups reveal that the 54-year-old frontman has acquired a passing resemblance to Gene Simmons of Kiss.”

The rest of the review mainly digs at the Cure’s decision to play a 45-song set that lasted over three hours, calling it “numbing” and bemoaning a dearth of “peaks or teasers, let alone much of the fraught darkness that got them here in the first place.”

But what set Smith off was this claim from Sullivan in the comments section: “I have it on good authority that the band have read the review and liked it.” That’s when Smith took to Facebook to tell his side of the story:

“I have it on good authority that the band have read the review and liked it.” Caroline Sullivan… WHAAAT?!!

TO BE CLEAR – AND ON THE BEST AUTHORITY – THE BAND HAVE INDEED READ THE REVIEW – BUT DID NOT LIKE IT!

THE REVIEW WAS – TO PUT IT POLITELY – LAZY NONSENSE… swampy… numbing… yet to work out how to build up a show… GULP!!! …

WHEN WE GO TO SEE AN ARTIST WE ARE FANS OF, WE DON’T WANT THE PERFORMANCE TO END… THAT’S WHAT BEING A FAN MEANS… ISN’T IT?

WE HAD TWO FANTASTIC NIGHTS, PLAYING TO GREAT CROWDS FOR A WONDERFUL CHARITY… THE GUARDIAN ‘REVIEW’ WAS SAD BITTER JUNK

But Sullivan wasn’t done. Oh no. She repeated her point in another column on April 1, headlined, “Why the Cure’s marathon gigs might not be the best way to play.” In her words:

“The build-up, the teasers, the communal release — all this can be played out, to greater effect, over a shorter timespan,” she wrote. “A very long gig, on the other hand, has a kind of ‘let’s see how committed you are’ aggression. It demands a long attention span — something rapidly becoming extinct in our 140-character culture; and it presumes that public transport runs all night and nobody has to get up early the next day.”

She argued that the Cure need to mix it up more instead of playing their “Trilogy” shows in which they perform three full albums. At the end, she signed off with “OK, Robert. Buy you a drink?” He did not fancy that. Returning to Facebook, he wrote:

LAZY NONSENSICAL CONTENT ASIDE; WE WERE DRIVEN TO REACT TO CAROLINE SULLIVAN’S ‘REVIEW’ BY THE BLATANT DISHONESTY OF HER ACCOMPANYING COMMENT

“I have it on good authority that the band have read the review and liked it.” IT WAS SIMPLY TOO MUCH TO IGNORE…

HAVING EXPOSED THE LIE, WE FIGURED WE WOULD AT THE VERY LEAST GET SOME KIND OF A HANDS IN THE AIR “IT’S A FAIR COP GUV” FROM HER FOR ATTEMPTING SUCH A BANAL SELF SERVING DECEPTION… WE THOUGHT THERE MIGHT EVEN BE A FAINT CHANCE THAT SHE WOULD BE MOVED TO APOLOGISE TO HER READERS FOR MAKING STUFF UP!

BUT AS COMMENT BY COMMENT SHE DIGS HER EVASIVE HOLE A LITTLE DEEPER, IT WOULD SEEM WE HOPED FOR TOO MUCH…

A SHAME. WE ALWAYS THOUGHT THE GUARDIAN AND ITS JOURNALISTS VALUED TRUTH?

HONESTLY? ummm… WE WOULD PREFER YOU JUST REVIEWED WITH A TAD MORE UNDERSTANDING AND HONESTY AND CONSIDERING LINES LIKE “Not as scary […] as Robert Smith in full fig” MAYBE THREW A FEW LESS STONES? OR MOVED OUT OF YOUR GLASS HOUSE?!!

“Rock is about grabbing people’s attention.” REALLY? THAT’S WHAT WE ARE SUPPOSED TO ‘BE ABOUT’? YOU THINK THAT’S IT? IT WOULD EXPLAIN A LOT

WE WILL NOW DRAW A LINE UNDER THE ‘SAD BITTER JUNK REVIEW’ EPISODE, AND SLIP BACK OUT INTO THE WORLD WITH A SHAKE OF THE HEAD AND A SMILE…

“WE ARE NOT TRYING TO ENTERTAIN THE CRITICS; WE’LL TAKE OUR CHANCES WITH THE PUBLIC”

If you’re not exhausted by reading all this, check out Smith’s screed on a planned new album, which may include some tracks that will be featured on a different upcoming album of unreleased tracks from a few years ago. That ought to confuse you into a sweet slumber.