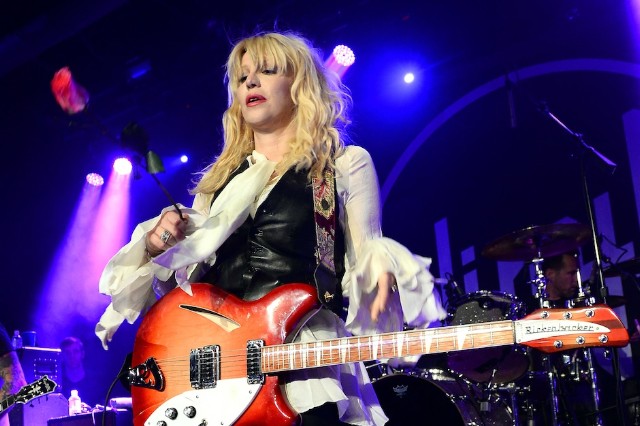 Earlier this week, Courtney Love told The Quietus that a reunion of the most beloved version of her band Hole was already underway, and that new music was in progress. In an interview that appeared yesterday on The Telegraph, however, Love suggested that she may have jumped the gun.

“We may have made out but there is no talk of marriage,” she says of the lineup of Hole that recorded Celebrity Skin. If anything, it appears that Love’s comments to The Quietus may have hampered the chances of the band getting back together. “It’s very frail, nothing might happen, and now the band are all flipping out with me,” she explains.

Given that the conversation fell close to both the anniversary of Kurt Cobain’s death and to Nirvana’s induction into the Rock and Roll Hall of Fame, Love is unusually reflective over the course of the conversation. She speaks out on the reputation she still holds among some Nirvana fans. “I don’t think the Yoko comparison is fair, I never sat in on rehearsals,” she says. “But Kurt thought Yoko was cool. He was an early adopter. He gave me a Yoko Ono box set when I was pregnant. Which I threw at his head. I wasn’t really a fan.”

Love looks back conflictedly on her time with Cobain, turbulent as it was. “It wasn’t very fun. It should have been fun. But I can barely remember it because people didn’t take care of us,” she explains. Some of those dark days are chronicled in a recently re-published 1994 SPIN cover story about Cobain’s death.

Elsewhere in the interview, however, Love is as spirited as ever, even taking swipes at some of Cobain’s former bandmates in her appraisal of her own new music. “I can’t just do a really good rock record and that’s the end of it. I can’t be Nickelback. And not to be a bitch, I can’t be the Foo Fighters.”

No word yet on whether the verbal barbs have met Dave Grohl’s ear, but she is poised to collect Cobain’s award at the Rock Hall inductions alongside the head Foo and Krist Novoselic. You have to imagine that the Nickelback comparisons won’t be taken much more seriously than her theories on the disappearance of Malaysian Airlines Flight 370.