Tyler, the Creator Nearly Incites a Riot at SXSW

Odd Future MC exhorts crowd outside packed venue to push down the gates — they did ... 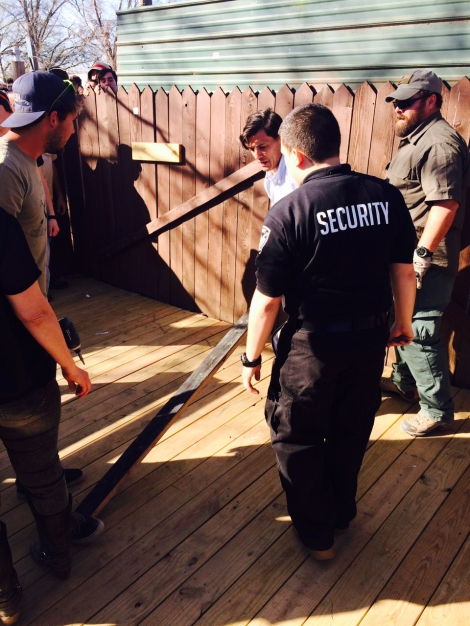 Does Tyler, the Creator thrive on chaos, or does he thrive on subjecting other people to it? There’s a difference. One tendency you tend to associate with artists, the other masochists. To wit: During his headlining spot at the Converse/Thrasher “Death Match” at the Scoot Inn Thursday afternoon, Tyler incited hundreds of people outside the already-packed venue to break down the gates, nearly causing a riot just hours after two people were killed and 23 injured outside his scheduled show at the Mohawk. SXSW came dangerously close to another tragedy.

The trouble began moments after the MC opened his set in the usual fashion — the wrong beat starts, someone yells “I fucked up,” they start over – before shouting out the hundreds of folks crammed outside the venue pressed against the perimeter.

“All you guys back there that can’t get in,” he said — then implored the mob to bust down the gates. There was a split second when it seemed like the crowd wasn’t going to do it, a possibility Tyler extinguished as he led the audience in a chant of “PUSH, PUSH, PUSH!”

And just like that, hundreds of people came rushing through the gates. I happened to be directly in their path when they did, and it felt like being hit with a wave: I pinged off this person and that person before stabilizing myself and catching my breath. I noticed the futile attempts of the security guards: a shit-kicker Joe Arpaio-type at the door tackled someone; another, meeker dude tried a clothesline that didn’t work. It was of little use: the handful of guards were pushed aside like twigs in a flood. Someone came rushing to the sound booth where I’d moored myself and yelled at the sound guy to turn the music off. He did. I looked behind me and, to my horror, saw that they were locking the gates.

Locking one mob out, locking another one in.

By that point the venue was at double, maybe triple capacity. I heard someone say the cops were outside, though I didn’t personally see any. Regardless, safe to say the situation was heated, and it got more heated when the sound guy turned off Tyler’s mic. It didn’t take long before there ensued the last chant any venue owner wants to hear after he’s barred his doors while a guy like Tyler’s on stage:

Pitting a packed crowd against a venue and its security is dangerous enough, but worst of all is the fact that he was courting disaster the day after the biggest tragedy to befall SXSW in all 27 years: Tyler’s set at the Mohawk was canceled after a drunk driver burst through a barricade attempting to elude cops, killing two and injuring 23. That horror certainly wasn’t Tyler’s fault, but 18-odd hours later, here he was inciting what came close to a riot.

This seemed why the venue did what it did: in order to quell the tension, management turned the sound back on.

“There would have been a riot,” said a tall skinny kid I spoke with about management’s decision to turn the sound back on. The kid and his adrenaline-pumped buddy had run up to the elevated bar platform when the crowd surged in. “There wouldn’t have been a bottle left.”

His mic live again, the first thing Tyler did before restarting his set was apologize to the sound guy.

“Big guy at the sound bar who flipped me off” — the dude had apparently given Tyler the finger somewhere between the rapper’s exhorting the folks outside and his own diving to protect his sound gear from their stampede — “No hard feelings.”

In response to Tyler’s non-apology, the dude flipped Tyler off again.

“Well fuck you, too,” yelled Tyler, and for a minute it seemed like things would teeter back into chaos. They didn’t. Tyler broke into “Bitch Suck Dick,” and by some miracle the tension went down a notch. “Let’s keep this show going, dudes,” the rapper said after the song, adopting a barely-there conciliatory tone with the venue, the security of which looked very visibly pissed.

I walked around. Conversations I heard all sounded like the one I had with the skinny kid: Did you see that? What the fuck? Crazy. Security was now bracing the wooden fences that lined the perimeter as they surged with outsiders desperate to get in.

Tyler managed to knock out a 20-minute set, concluding with “Tamale.”

“Get home safe!,” he shouted before leaving the stage.

In the backstage area immediately following the set, the stampede was all anyone was talking about: Did you see that? What the fuck? Crazy. Tyler’s enormous bodyguard — the dude who is paid to keep a guy who likes to start trouble out of it — kept would-be selfie-takers at arm’s length, but I managed to grab Tyler to ask if he had any comment on what just happened.

Later, he tweeted, “THRASHER SHOW WAS GREAT! HAPPY EVERYONE GOT IN. I PLAY PANDORA TONIGHT AT 1AM COME!!!”