It ain’t your right, and you know what? That’s not okay. Sky Ferreira, who sings a variation of those lines in a krautrock-chugging salvo from her well-worth-the-wait debut album, last year’s Night Time, My Time, isn’t letting nasty online comments slide anymore. In a Facebook post today, the singer called out sexually abusive online comments and other “hateful” interactions and asked others to delete or report that type of sludge when we see it. The post helps expand an ongoing conversation in the music community about misogynistic and homophobic online feedback.

Ferreira said she recently blocked someone for repeatedly mocking an incident of sexual abuse fron her life that she had shared in hopes it would help others. “I’m exhausted of (more than some) people telling me how I should look or be if I want to be a ‘pop star’ & how they think it’s okay to say vile & (sexually) abusive shit to me on a daily basis over the internet,” she wrote. “I’m not only writing about myself…because almost every person has to deal with this.” She added, “If you see hateful/disgusting/abusive comments,please start reporting it or deleting it.” Her point, in part, is that online ugliness gets in the way of the direct connection between artists and fans that social media were supposed to make possible in the first place.

CHRCHVES singer Lauren Mayberry, whose 2013 album The Bones of What You Believe is filled with generous synth-pop swooners, took a similar tone in an op-ed last year calling out online misogyny. And Ferreira herself is no stranger to speaking out when she sees a problem, criticizing (fairly, we’d say) a gender- and race-based double standard for how the media treats pop figures.

As for recent music output, Ferreira has teamed up with Ariel Pink for the “My Molly” video, gone David Lynch in the “Night Time, My Time” video, and taken a hugely deserved bow at New York City’s Webster Hall. She’s also been on tour recently with Miley Cyrus, weathering a nasty injury, and you can see her perform “You’re Not the One” on Jimmy Kimmel Live! at the bottom of this page. 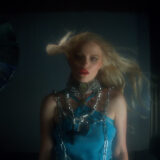 I’m exhausted of (more than some) people telling me how I should look or be if I want to be a “pop star” & how they think it’s okay to say vile & (sexually) abusive shit to me on a daily basis over the internet. I’m not only writing about myself…because almost every person has to deal with this. It’s a shame because I now feel like I can’t connect or directly speak with true fans. I’m not a mess,I’m not a drug addict, I’m not a slut or a bitch. I recently blocked someone because they were constantly harassing me & making fun of sexual abuse that happened in my past…Which I’ve publicly spoken about to hopefully help others. They came to one of my shows & my friend confronted the person.We were accused of being homophobic after. Which is absolutely insane because my friends,my family & a majority of my fans are homosexual. Sexuality,gender,race,& age are irrelevant to me. As it should be for everyone by now. Treating people like shit because you feel like shit doesn’t help anyone. If you see hateful/disgusting/abusive comments,please start reporting it or deleting it. I think that’s the only way we can start to lower that sort of thing from happening. Use the internet as a way to connect with others & LEARN. Show & spread compassion. <33333

P.S. Sorry for the typos