KIT ft. Jeremiah Meece, “Cinnamon & Gold Teeth”
Hey there, ScHoolboy Q, I’m gonna let you finish, but this KIT character from Chicago, connected to the broken-R&B crew JODY, is making the best pill-addled, druggy, art-gangsta music right now, despite Oxymoron being the no. 1 album in the country and all that good stuff. Heavy on mood, and light on songwriting or even structure (save for its haunting hook), this closing track from last year’s New Wavey mixtape — resurrected this month by way of a syrupy, Olde English-wasting video — is a sing-rap track that moves at its own pace and occupies its own post-A$AP (and post-Mortal Kombat II) niche.

Migos, “Antidope”
It’s interesting that Migos opted for a sequel to their No Label mixtape as the official follow-up to last year’s unassailable Young Rich Niggas, right when we’re privvy to a number of record labels and rapper brands grabbing onto a piece of Young Thug’s buzz. Ultimately, this will work out well for Migos, who by still not signing, can continue doing what they do without being absorbed by whatever’s left of the street-rap mainstream: No Label II, a 25-track, 90-minute epic packed with hooks, is the kind of dick-swinging statement that a mountain-man-with-an-electric-guitar kind of A&R would never let happen. The highlight here is “Antidope,” which pairs “Versace”-level inanity with a creeping Zaytoven beat that recalls Migos’ early street hit “Bando.” Typical of Migos, there’s plenty of word-happy goofiness (“Austin Powers, you niggas be taking my mojo”), but also, occasionally, some world-weary reportage: “The plug, he be here any second now /? If he didn’t then something went down / We’re losing bags, gotta go to the stash / At the age of 19, I run it from the tag /? Put it on my mama, no flex, no brag.” 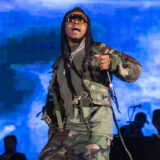 Rick Ross, “Dope Bitch Skit”
Make sure you endure this endless skit from Rick Ross’ wan Mastermind, in which two aspirational morons who sound like the girls from Spring Breakers blab on about mid-high fashion and take on “basic bitches” (“Basic bitches make me nervous… You wanna impress? Here, I’m gonna show you. If you’re a boss, this stack right here falls out of your pocket, you don’t even got time to pick it up. You keep walking.”) while some dopey dude can’t even feign interest (“All right, that’s cool”). “Dope Bitch Skit” is obnoxious, gauche, and even pretentious (George Condo gets a shout-out), and it defines the terrible corner shiny street rap has painted itself into, summing up the Mastermind’s problems much better than any of its jerry-built tracks.

Smoke DZA ft. Ab-Soul, “Hearses”
Rhymes from place-filling, slightly warped Curren$y protegé Smoke DZA and a beat from DJ Dahi — the producer behind Drake’s druggy “Worst Behavior,” and this track strikes a similarly precarious balance between on-painkillers soft and on-angel-dust angry, thanks to those trash-can snare drums — makes for some platonically haunted, dark-night-of-the-soul weed rap. But Ab-Soul’s slyly threatening incantation of a hook (“I just can’t say no… Let them know that I’m giving out hearses”) and a feverish verse that makes up for the toilet-rat shtick that dominated his 2013 guest spots turn this into an enterprising confessional: “I got demons in my life, I need Jesus in my life / ?But I ain’t sipping wine, I’ll be fine popping Champagne / And we’ll bring pain to your camp / ?If you don’t join the campaign.”

Young Thug, “Ouch”
The lubricious rewards of Young Thug should be apparent by now, and with “Danny Glover” and “Stoner” scooping up some mainstream airplay, he’s arriving at the kind of “you’re either with this guy or against him” moment that it took someone like Gucci Mane a few years to cultivate. Thug’s astral fashion sense (Hot Topic jeans, painted fingernails, and dress-like shirts) have probably exacerbated this as well. And so, today, let’s focus on this beat from producer Y.D.G.: An EDM synth flickers, like it’s playing out of a crashing Gateway PC, finally collecting itself and pulsing good and proper nearly a minute in, but even then, it’s more like a shy, distracted fistpump. “Ouch” avoids the trap formula Thug usually raps over for something almost as out-there as the Atlanta next big thing’s delivery.