Anthrax and Megadeth on Board for Motorhead’s MotorBoat Metal Cruise

Lemmy and co. bring metal to water this September 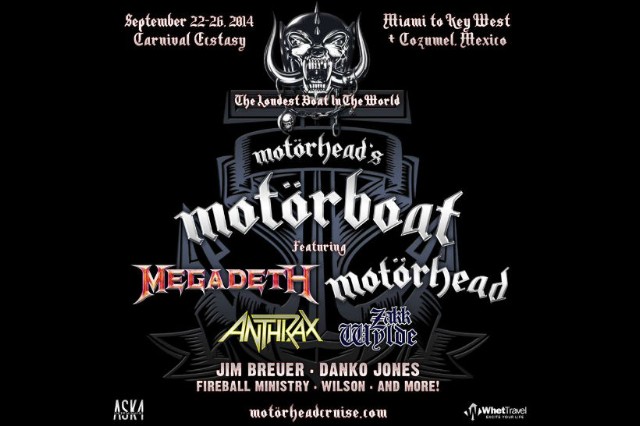 Ahöy! We all know that Lemmy is a god of metal and now we’ll find out if his power can match that of the sea deity Poseidon (maybe one of these experts can, ahem, crack the case for us). Yes, Motörhead are launching the MotörBoat metal cruise. The Iron-less maiden voyage will also feature Megadeth and Anthrax as co-headliners, with Zakk Wylde, Danko Jones, Wilson, Fireball Minstry, and comedian Jim Breuer supporting.

“This will be everything you’ve come to expect from a night out with us, except even louder, with more great bands and no way of escaping,” Lemmy said in a release. “If you thought waves could rock a boat, you’ve got another thing coming with this lovely little outing.”

Motörhead released their 21st studio album, Aftershock, last year but Lemmy was beset by too many health problems to tour behind it. Here’s hoping his only ailments on this trip involve sea sickness and hangovers.

The boat, which is fittingly named the Carnival Ecstasy, departs Miami on September 22 and hits Key West and Cozumel before returning on September 26. All interested parties are encouraged to join the MotörBoaters Facebook group in order to secure their place on “The Loudest Boat In The Wörld.” Also promised: “artist meet and greets, Q&A sessions, wet and wild parties, crazy theme nights and a ship-ton of other fun stuff!”