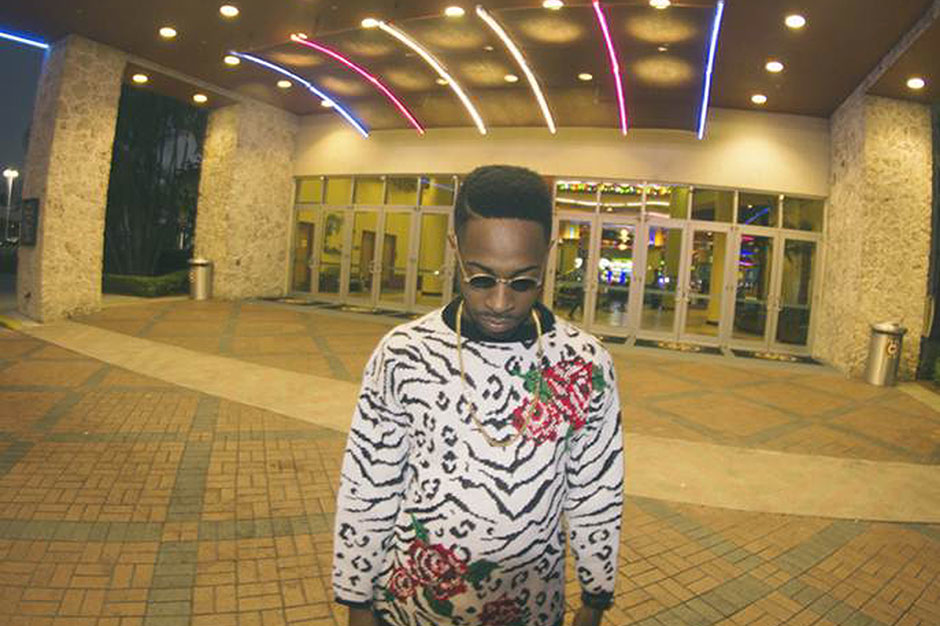 “I’m not trying to sound cocky, but I’m kind of on my own in South Miami,” Cashy quietly explains. “I’m bringing something different.” When we speak on the phone, the 24 year-old’s voice is modest and calculated; it’s a stark contrast to the over-the-top, scattered squawk that he employs on tracks like his simmering Internet hits “Wrong Way” and “Stupendous,” both off his terrific Platinum Plus EP. He further defines what he’s doing as “that old school Miami Vice or Grand Theft Auto: Vice City look — when Scarface was popping.”

Such ’80s-era cocaine worship is nothing new in hip-hop, but Cashy’s evocation of the pastel-powered time period comes from personal experience, and from a desire “to represent the culture and environment” where he grew up. Cashy was born in 1989, which means that the Miami he mines in his music is something he experienced at a very young age, when the era was on the descent or, at least, in transition. His Miami is overextended and getting sloppy. Think Don Johnson as Sonny Crockett in the final season of Miami Vice, when his hair was moving into mullet territory; Cashy refers to a Miami that was still reeling from the “cocaine cowboys” and about to suffer billions of dollars in damage from Hurricane Andrew.

Take the rapper’s Platinum Plus stand-out, “Wrong Way,” which is less a trendy, retrolicious facsimile than a personalized, nostalgia-haunted interpretation of the recent past. The track’s blissed-out, rumbling beat is like a chintzy atmospheric piece of Jan Hammer music piled on top of something as menacing and unforgiving as a SunnO))) drone. Defeated trap skitters push the track along while Cashy delivers a threatening ear-worm (“Nigga, don’t come at me wrong”). The whole thing is punctuated with absurdist, helium-voiced ad-libs that get goofier and goofier, especially when tossed with modest boasts along the lines of, “All I rock is vintage.”

There’s an anticipatory darkness to these rubbery raps. And there are few Miami rappers who are one degree removed from both Rick Ross and Spaceghostpurrp. On last year’s Picasso mixtape, Cashy worked extensively with The Renegades production collective, the crew best known for DJ Khaled’s 2011’s single “Welcome To My Hood,” featuring Ross, Lil Wayne, Plies, and T-Pain. Picasso’s highlight is another one of the Renegades’ hits. Cashy’s stoned stomper “Tyra Dank” bumps along like anthemic trap music after too many blunts, fueled by Trick Daddy-like triumph.

Additionally, through Fway God, a member of SpaceGhostPurrp’s Raider Klan, Cashy met producer Purp Dogg, who works closely with the Raiders, but is perhaps best known for Soulja Boy’s “We Made It.” (The fizzling track, with a subtle nod to blaxploitation soundtracks, had a bit of a moment last year thanks to Drake’s remix. More recently, it was remixed by Jay Z.) After their initial meeting, Cashy headed to the producer’s Soundcloud and immediately gravitated towards an instrumental that would become “Wrong Way.” “I was like, ‘Yo take that off your Soundcloud, I’ll record it next week and have it back to you but we’re not gonna drop it yet. We’re gonna save it.'”

The two put “Wrong Way” on the back burner while they sculpted Platinum Plus, which ended up being entirely produced by Purp Dogg. At just six songs and a skit, the release is intentionally short and to the point. “I strive not to give people too much,” declares Cashy unassumingly. “I stick to one thing and don’t switch it up too much so people can feel it and build on where I’m going.” That said, when exploring Cashy’s caves of canny pastiche, you’ll find influences stacked on top of one another: Platinum Plus’ cover evokes old Cash Money records from the late ’90s, while his delivery nods to Bone-Thugs-N-Harmony’s weeded breeze, bass music’s propulsive bounce, as well as the gummy repetition of modern street heroes like Gucci Mane.

In some respects, Cashy stands alone in doing away with the yacht-hop smoothness of mainstream Miami rap, yet he never disappears down the hyper-regional rap rabbit hole. He’s more like the rap equivalent of a local that swoops in on an episode of Miami Vice and steals the spotlight for a moment. Given the quirky crime-lord characterization he displays in the video for “Wrong Way,” it’s no surprise that Cashy actually talks of Hollywood dreams too. “I’m actually trying to get in on the acting scene you know, it’s deeper than the music,” he adds with a laugh. “I wanna do my little acting thing here and there, but I don’t wanna give the people too much of that yet.”