You might have heard somewhere that Sunday marks the 50th anniversary of the Beatles' first performance on The Ed Sullivan Show.

And while that appearance was the most world-changing of the group's career — if not all of rock music's — so much fascinating video from the rest of the band's seven years in prominence is overlooked. So, we are using this anniversary as an excuse to revisit not only the Fab Four's most legendary TV performances, but also some that are surprisingly little-known. Because it was impossible to perform on as many TV shows as they were asked, the Beatles were one of if not the first artists to pioneer the music video, and the Gordian knot of the group's legal affairs has meant that some of these, particularly "The Ballad of John and Yoko" and the brilliant 1967 video for "A Day in the Life," are seldom seen.

To keep things interesting, we skipped videos from feature films (A Hard Day's Night, Help!, Magical Mystery Tour, Yellow Submarine, and Let It Be), as well as the more well-known full-length concert films (Live at the Washington Coliseum 1964, The Beatles at Shea Stadium, and the excruciatingly off-key although well-filmed Live at Budokan 1966). We also use the term "TV performance" loosely to include live footage, mimed videos, filmed concerts, etc. — meaning there are actually more like 50 performances here, not 15.

Sit back and dig into some rarely turned stones from the most thoroughly documented musical group in history. (Much respect to The Beatles Bible and Mark Lewisohn's The Beatles Recording Sessions for the bulk of the recording details posted here.) 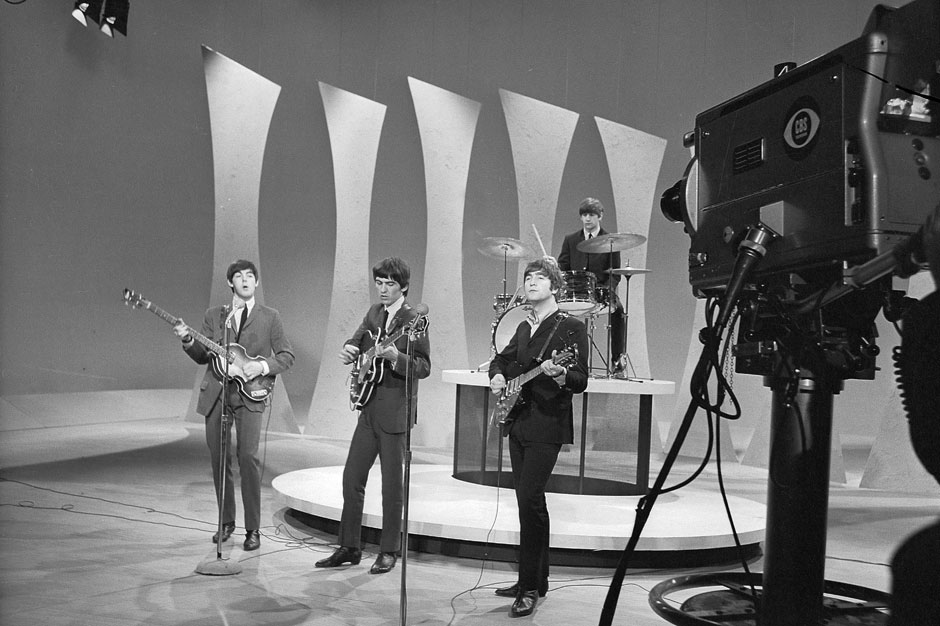 The most well-known of the Beatles' many television performances, the group appeared on the show three consecutive weekends in February 1964 (along with another set in 1965). There's not much to say that hasn't been said thousands of times already: Untold millions screamed, grew their hair, formed bands, argued with their parents, burned bras, tried drugs, and turned into violent revolutionaries.

The moment that brought psychedelia to the world was also, according to PR of the day, the first "live global television link," watched by an estimated 150 million people in 26 countries. Titled Our World, the show featured the Beatles in full Summer of Love regalia with an orchestra and a few famous guests, essentially overdubbing onto a pre-recorded rhythm track as an announcer explains the process. The original broadcast (below) was in black-and-white; the more well-known version (above) is shorter and colorized.

Presented as a twofer like the original single: the famous live David Frost Show performance of the then-longest popular single in history (above) paired with a smoking version of the "Revolution" B-side (below), which pairs live vocals with a pre-recorded instrumental track. "Hey Jude" presents a sterling example of Paul McCartney's slightly unnerving habit of staring directly into the camera while he sings, the dreamboat intentions of which were somewhat lost when he did the same thing (with a scruffy beard and greasy hair) during the Let It Be film.

Filmed five days apart, the Royal Variety performance (above) contains John Lennon's world-famous line, cheekily delivered in front of the Queen Mother and Princess Margaret, "For those of you in the cheap seats, I'd like ya to clap your hands to this one; the rest of you can just rattle your jewelry." Drop In was a Swedish television program and arguably is the most hard-rocking Beatles performance of the era.

A vividly filmed slice of vintage psychedelia, this rarely aired clip is so great it makes you wonder why music videos as an art form didn't get better sooner. Filmed during the recording of the song's orchestral section on February 10, 1967, the clip's jump cuts feature the Fab Four, producer George Martin, multiple orchestra and bandmembers clowning around and wearing masks, along with a slumber party's worth of Swinging London fabulistas including Mick Jagger, Keith Richards, Donovan, Marianne Faithfull, Pattie Harrison, the Monkees' Mike Nesmith, and others — many of whom were handed 16mm cameras and told to film whatever they wanted, which explains the video's jumbled but exhilarating footage. The clip was banned by the BBC because the song, not the video, was deemed to have drug references, but the make-up date was "All You Need Is Love."

The only known footage of the Beatles performing at the legendary Liverpool club that launched them, this clip catches the Fabs covering Richie Strong's "Some Other Guy" during their awkward cleaning-up transition from leather to suits. (They were also awkwardly transitioning from Pete Best to Ringo, as a fan can be heard shouting "We want Pete!") Yet the footage fully captures the fervor of their early performances in that cramped underground space, along with some amazing shots of the crowd displaying what passed for cool in Northern England on August 22, 1962. Considered too rough to air, the footage sat on a shelf for more than a year until the group's popularity made executives deem it not so rough after all. It was finally broadcast on Granada TV's Scene at 6:30 program in November of 1963.

Apparently, parsing assets was a thing even in May of 1966: Two matching sets of videos were made for both sides of this Revolver-era single, all directed by Ready Steady Go! producer Michael Lindsay-Hogg (who would later direct Let It Be). The first pair, in black-and-white and slated for The Ed Sullivan Show, featured shade-bedecked Beatles filmed miming the songs at Abbey Road Studios (a still from the set is the iconic back cover of Revolver). The following day, two color promos (bound for the BBC's Top of the Pops) were lensed at the lush grounds and greenhouse of Chiswick House in West London, with the group resplendent in their Swinging London finery and casting a huge influence on the look of the Jam circa Sound Affects, among many others.

What a difference a little facial hair makes. The suddenly mustachioed mop-tops threw fans a wobbler with this odd-sounding single and these odd-looking clips, starkly filmed on some doubtless frigid English winter days early in 1967. Backward footage, a piano with strings attached to a tree, close-ups of eyeballs, what was the world coming to? The more embraceable "Penny Lane," filmed in the Beatles' hometown of Liverpool, shows off local color and their decidedly limited skills as horsemen …

Another rarely aired clip acts as the video counterpart to the song's travelogue of the travails of the dynamic duo in early 1969. Jet-setting, Paris, dozing in the back of a Rolls Royce, a wedding in Gibraltar, bed peace and publicity as performance art, all in the service of a love story.

Roughly the equivalent of a gig at the Jersey Shore, this six-song August 1965 performance finds the group at a summer seaside resort city just a couple dozen miles north of Liverpool, and represents their last video of a well-played concert performance. As other clips indicate, the group's live chops quickly deteriorated as the screaming throngs drowned out the music, and they eventually stopped trying. But here, one last time, they're showing the power they could summon on a good night.

This clip, filmed at the very end of the Beatles' existence as a group, might have the most cognitive dissonance of anything here. Needing a video to promote the new Abbey Road album but lacking a group willing to promote it, the clip compiles the Beatles (at their hairiest) and their wives gazing lovingly — and goofily — at each other as they amble in the great outdoors. Ringo and Maureen zoom around on minibikes; Paul and Linda cavort with English sheepdog Martha at their farm in Scotland; George and Pattie smile awkwardly and walk around; John and Yoko, clad in long black cloaks, stride wraith-like through the ground of his Tittenhurst estate (yes, it's actually called that). It was a surprisingly cornball move for the group at this point in their career, but the most telling detail is the fact that all of these segments were filmed separately: At no point were the four bandmembers in the same place.

The Kafkaesque lineage of this show has the group performing live in London for the British edition of an American show that aired in the U.S. but never in England. Got it? Anyway, this October 1964 Shindig! set finds the group playing three songs rarely seen in TV performances: two from Beatles for Sale — "Kansas City" / "Hey-Hey-Hey-Hey!" and "I'm a Loser" — and the early Ringo showcase, "Boys."

In February of 1968, just before embarking on their months-long sabbatical to India, the Beatles bashed out four songs to tide the world over during their absence: "Lady Madonna," George's "The Inner Light," the original version of "Across the Universe," and this comparatively obscure Lennon rocker, initially available only on the Yellow Submarine soundtrack. A film crew captured the Beatles recording this song but edited the footage into a promotional film for the then-new single "Lady Madonna"; decades later it was finally matched to the song they were actually recording, providing an intimate look at the group making a record and, unlike in Let It Be less than a year later, actually getting along. Props to Paul for the courageous cardigan.

Yes, this Australian TV broadcast was sponsored by Shell Oil, and yes, it's tempting to call it "The Beatles Shill for Shell." The half-hour-long Melbourne show is a rare professional recording of a nearly complete set from the era: Manager Brian Epstein allowed only 20 minutes to be broadcast, but some enterprising soul has filled in the gaps with still photos to accompany a decent-quality bootleg recording. The set list is standard, but rarely performed tracks like "You Can't Do That" and "Can't Buy Me Love" spice things up. Incidentally, Ringo had just rejoined the group after taking sick leave for the first dates of the tour, having been replaced briefly by a drummer named Jimmy Nichol, who quickly faded back into obscurity.

Die Beatles is not a morbid joke but the actual title of this June, 1966 German broadcast. Be that as it may, the title was fitting for more reasons than one: As the first date of the Beatles' last-ever tour, a leg that ended with the group being menaced by Philippine police after unintentionally standing up the dictator's wife, this wobbly Munich performance is notable more for historical than musical value, although the group still turns in memorable performances of "Baby's in Black" and "Nowhere Man." The look on Ringo's face as Paul forgets the words to "I'm Down" is worth the price of admission all by itself.