OutKast have added another date to their busy year of reunion gigs, and they’ll hardly be alone among formidable talents assembling at the 2014 Sasquatch! Music Festival. Queens of the Stone, Neutral Milk Hotel, Frank Ocean, M.I.A., and more are also booked for the Gorge Amphitheatre in George, Washington. This year’s festival will take place over two weekends (May 23 to 25 and July 4 to 6), with two different lineups. 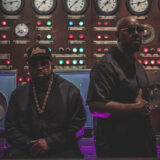 Passes go on sale on February 8 at 10 a.m. PST via the festival’s website.