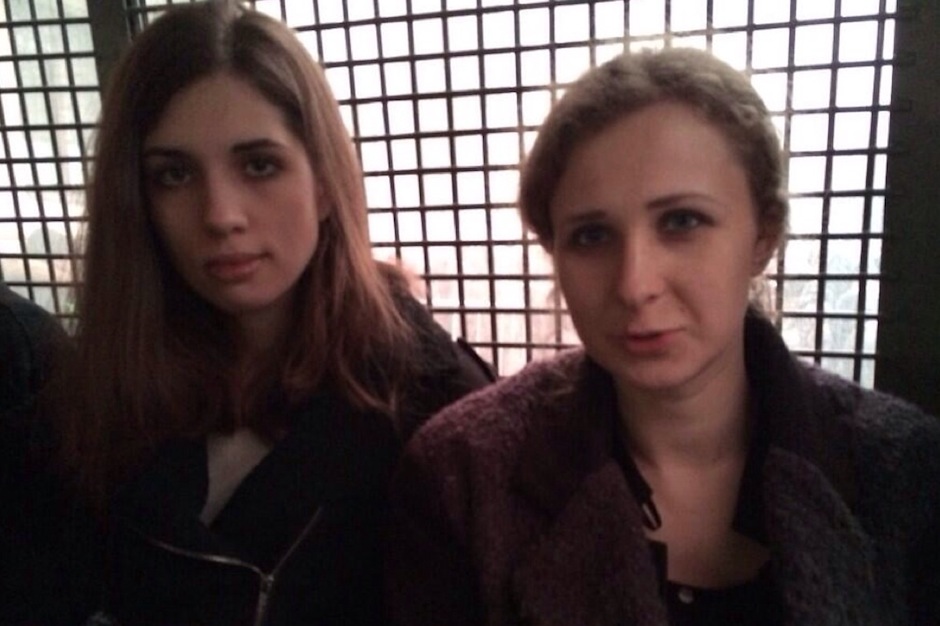 CREDIT:Photo by the Voice Project

The Pussy Riot Olympics are over, but the members of the riot grrrl-inspired Russian activist group aren’t done drawing global attention to President Vladimir Putin’s quasi-authoritarian regime. And once again, it has meant a run-in with the law.

Moscow police arrested hundreds of protesters today outside a courthouse where seven people were given prison sentences for demonstrating against Putin on the eve of his 2012 inauguration. Among those detained were Pussy Riot members Nadezhda “Nadia” Tolokonnikova and Maria “Masha” Alyokhina, according to the Voice Project, a nonprofit group that tries to use music to fight for human rights.

According to the AP, Moscow police locked up 200 people in all for allegedly violating the public order outside the courthouse. Inside, seven defendants were sentenced to as many as four years in prison. An eighth defendant got a suspended sentence. They and 20 other people had been arrested after a May 6, 2012 rally before Putin’s third-term inauguration became violent.

Pussy Riot’s Tolokonnikova and Alyokhina used the time of the Winter Olympics in the Russian town of Sochi to draw attention to their cause. They put out a new protest video and song. And they made sure word reached the press of their arrest in Sochi, their whipping by Russian Cossack militiamen in Sochi, and their raw-chicken run-in with pro-Putin youth at a Moscow airport. Of course, that’s all after spending 21 months in prison for staging an anti-Putin protest in a Moscow cathedral.

While it’s easy to be cynical about pop star’s radical-chic stances, this isn’t a game for Pussy Riot. Putin’s ally in Ukraine, Viktor Yanukovych, fled from the presidential palace over the weekend. Russian state TV, during its coverage of the “May 6″ protesters’ trial, reportedly interspersed grisly images from Ukraine with footage of the Moscow demonstration, as if to say, “It could happen here.” The $51 billion Olympics are finished; how Putin will respond to the growing crisis in his backyard now becomes the $64 million question. Pussy Riot are doing their part to keep the world paying attention.