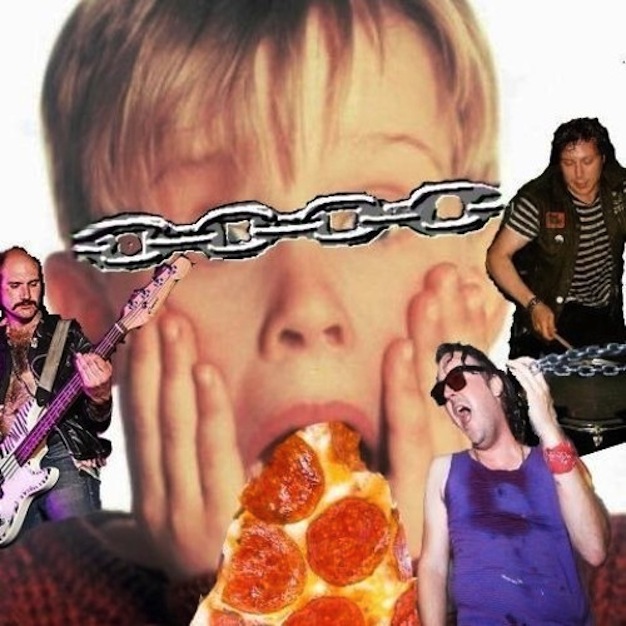 The pizza wars are heating up again. And this time, it’s Personal. To recap: Last December, the online music world learned that Macaulay Culkin was in a Lou Reed parody band called the Pizza Underground. The Velvet Underground frontman’s then-recent passing aside, this development raised eyebrows because a pizza-themed garage-rock band already existed, namely the much-loved Personal & the Pizzas — a Jersey-reppin’ but actually San Francisco-based band who soon made this all a lot more fun/bizarre by threatening to kill, then sue, Culkin’s group. The Pizza Underground have since released a video, offering visual proof of the former Home Alone child star’s kazoo solo. Not sure how Animal Collective’s new pizza fits in here, but it must, right?

Now, Personal & the Pizzas have delivered (via eMusic’s 17 Dots blog) a legit Pizza Underground dis track, “Death Threat.” It’s unkempt, hard-chugging proto-punk wherein Personal casually sneers, “Roll over, Tchaikovsky / Tell Lou Reed the news.” He probably doesn’t mean the news about Japan’s “Beethoven” turning out to be a fraud, but you never know. The plot thickens like so much cooling cheese: Both bands are playing San Francisco the same night, March 5. eMusic quotes Personal as saying, “We’re playing at the cool venue and for frickin’ FREE! They’re playing at some dump for rich kids.” Sriracha shortage or no, this should get spicy.

As for Culkin’s instantly more famous crew, whom you’ve gotta hope take this all in good fun, they have a new release. Bitter Melody Records recently announced it’s putting out the Pizza Underground’s demo tape on cassette. Per the press release, copies sold on tour will come with “cheesy yellow” cassette shells, while the label is sending out “pizza sauce red” cassette shells. The tapes come with a download card, of course. See, this is all legit and not just fodder for pepperoni-obsessed music writers counting down the minutes to free Friday night happy-hour slices. But wait: You know who else put out a cassette? Personal & the Pizzas.