Owen Pallett will return this spring with his fourth solo album. The follow-up to 2010’s Heartland is called In Conflict and it’s scheduled to arrive May 13 via Domino/Secret City.

Written and produced by Pallett, the upcoming effort spans 13 tracks and features contributions from Brian Eno (who supplies vocals, as well as synth- and guitar-work) and the Czech FILMharmonic Orchestra. Pallett recorded the LP with drummer Robbie Gordon and bassist-singer Matt Smith serving as the core rhythm section.

“The record is meant to approach ‘insanity’ in a positive way,” Pallett says in an official statement. “Depession, addiction, gender trouble, and the creative state are presented as positive, loveable, empathetic ways of being. Not preferable, per se, but all as equal, valid positions that we experience, which make us human.”

The artist formerly known as Final Fantasy has also revealed the full-length’s cover art (see the ink-stained image below) and shared a trailer for the album that offers detailed recording session credits and a preview of a symphonic/electronic new track (watch the video above).

Pallett — who is nominated for an Oscar for Best Original Score, thanks to the work he and Arcade Fire’s Will Butler did for Spike Jonze’s Her — has also announced a string of tour dates. Scroll down for details, and pre-order In Conflict through Domino’s Dom Mart or iTunes. 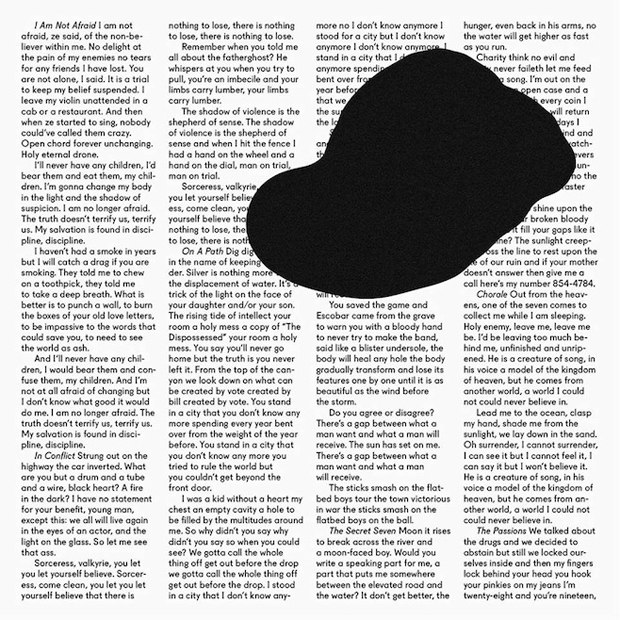