Neneh Cherry has made a career out of hiding in plain sight — which, granted, might be a funny thing to say about a woman who once performed on Top of the Pops when she was seven months pregnant.

But, be honest now: Even if you know better than to reduce her career to “Buffalo Stance” — and I hope and trust you do, even though careers have certainly been based on less than that pinnacle of pop perfection — did you really know the full extent of what the Swedish-born singer has done? She played in two major dubby post-punk bands (New Age Steppers, and Rip Rig and Panic) alongside dubby post-punk heavyweights like Bim Sherman, Mark Stewart, Steve Beresford, Ari Up, and other members of the Pop Group. She sang backup in the Slits and danced in Big Audio Dynamite’s “C’mon Every Beatbox” video. The Dreem Teem remix of her “Buddy X” was a minor U.K. garage hit, and her short-lived group Raw Sex’s 1982 single “Stop the War,” a Norman Whitfield cover repurposed as a protest against the Falklands War, is probably the best Casio-dub-scratchappella oddity (with sheep sound effects!) that you’ve (probably) never heard.

Her list of collaborators over the years includes Bomb the Bass, Massive Attack’s Robert Del Naja, Portishead’s Geoff Barrow, Tricky, Guru, Groove Armada, Gorillaz, and a Swedish rapper named Petter — and also the The, Pulp, Live’s Edward Kowalcyzk, Youssou N’Dour, Peter Gabriel, Michael Stipe, and the unholy trifecta of Cher, Chrissie Hynde, and Eric Clapton, Cherry’s collaborators on a 1995 cover of the Judds’ “Love Can Build a Bridge.” (Clearly, so can Cherry — the track was U.K. No. 1.) All this, plus three solo LPs, two albums with her trip-hoppy group cirKus (alongside her husband, Cameron McVey), and 2012’s The Cherry Thing, a collaboration with Scandinavian jazz heavyweights the Thing (Mats Gustafsson, Paal Nilssen-Love, Ingebrigt Håker Flatn) covering songs by Suicide, the Stooges, Martina Topley-Bird, and Cherry’s own stepfather, the late, great free-jazz trumpeter Don Cherry.

All this, yet Cherry still somehow feels like a marginal figure — just too damn diverse for folks to figure out where, exactly, she fits. Blank Project, technically her first solo album since 1996, should change that. It’s a major work, one that confirms that she’s only marginal in the sense that she’s vibrating on her own wavelength, way out at the edge of the spectrum. 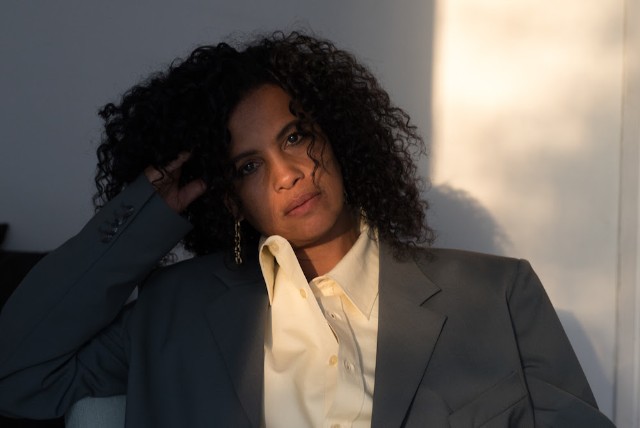 This isn’t exactly a solo album; while Cherry receives top billing, it’s really a collaboration with the synths-and-drums duo RocketNumberNine, who wrote and played all the music. Four Tet’s Kieran Hebden produced, but his touch is so light as to be imperceptible: The simplicity of the production, with its close room tone and general air of unadornment, lends to the impression that you’re right there in the studio with Cherry and her bandmates. It’s a slightly jarring experience at first, if only because that kind of low-key verité has become so uncommon in recorded music, particularly of an “electronic” bent. Some of the directness doubtless derives from the fact that they recorded all ten tracks in just five days; she may take her time between projects, but Neneh Cherry’s week definitely beats your year.

As far as the music goes, it doesn’t sound much like anything else out there. The rhythm tracks — skeletal, rumbling, buzzy as a busted speaker cone — recall RocketNumberNine’s own instrumental work, but their own stuff is knottier and proggier; here, they tend to lock into a groove and then lean way back to make room for Cherry, whose voice tips it all into a new dimension. I want to say it’s something like Suicide and ESG jamming in Manfred Eicher’s studio — hot funk sunk into a wood-paneled deep freeze.

Cherry’s is a curious voice, neither soft nor particularly powerful, but with a breathy edge that lends intensity to her plainspoken delivery. She holds her own without expending much obvious effort, and the result doesn’t sound like it’s been overdubbed and compressed and pumped up in the mix, another detail that sets Blank Project apart. Her melodies drift like scraps of paper in an updraft; she wraps her phrasing loosely around the beat and lingers on the breaks between syllables, weaving lazily around the notes. She has a casual relationship with “perfect” pitch; compared to most contemporary R&B singers, her version of melisma is less an acrobatic display than a nonchalant shrug.

Lyrically, Blank Project scans as a series of journal entries and free associations. There’s a rumpled quality to them, as though they’d been written on torn-out notebook pages and stuffed in a pocket. Like this verse from the title track:

Need to be right, right to be wrong
Sometimes a loser, lost down the hall
Leave me alone but don’t leave me lonely
And please don’t look now
Can you see this
Does my ass look big
In these new trousers
My ego won’t let me
I forget
I feel so small I hate you I hate you I love you
I love it all

She focuses mainly on the three M’s: motherhood, marriage, and money. The latter is a persistent presence, suggesting that iconhood alone isn’t enough to pay the bills these days: “Getting paid I can’t hear the penny long / My bank won’t give me another loan.” The occasional flash of anger — “Wolf packs congregating on the corners, hiding their cutbacks” — echoes the urgency of Cherry’s early music-making years, in Thatcher’s Britain, even if her sound has since mellowed.

“Dossier” and “Blank Project” both address the pleasures and terrors of domestic comfort. In the former, she tells the story of meeting her husband more or less like you’d imagine her telling it to a friend, or maybe to her daughters. It starts with a phone number passed to her over the cash register and ends with the simplicity (and mystery) of a picture book: “Now they meet / Every night / Beside their bed / And clean their teeth / Before they climb / Into their heads.” The title track, meanwhile, surveys the tumultuous emotions of married life — that’s where the “does my ass look big” line comes from, if you couldn’t guess — but it also has a happy ending, I think: “Nowhere to run, nowhere to hide / Husband and bride leaking perfection / All kinds of fun, ocean of pride / We’re super wide, we’ve got protection.” (Perhaps, if Cherry’s really worried about money, she could get some sync money from Trojan for this one.)

Those lines look a little weird on paper, but they sound totally natural the way she sings them. What makes the whole album so charming is Cherry herself: guileless and witty and a little rueful, and just generally pretty grounded, at least more so than we expect from pop singers with this many years in the game. She’s not shy to admit, “Service myself when I’m all alone”; in three lines, she can go from bitching about the taxman to proclaiming, “I am like a go cart full of the love of so many” — an odd phrase that hits even harder for its slightly awkward phrasing.

And for listeners who still aren’t sure exactly who she is or where she fits, she comes right out and says it in “Out of the Black”: “I’m Neneh, I’m complete when all my kids are happy / I fear what’s gone before will come right back and slap me.” Whatever those traumas are, she hints at them in “Hands Across the Water,” the album’s opening song. It’s functionally a cappella, save for a slow, barely-there drum beat. Half-speaking, half-singing, she reflects on her mother’s death, on God, on New York’s siren song, on endless parties and behavior “no one can defend”; it’s a lament that doubles on a prayer of thanks “for our children tucked up sweetly in their beds.”

As it happens, “Hands Across the Water” was the last song she recorded for the album, after the sessions with RocketNumberNine had finished; it was McVey that coaxed Cherry to do one final song, over a sparse backing track from Four Tet. It’s the kind of thing you’d imagine being tacked onto the end of an album, so the fact that it comes first seems significant, especially given how quiet it is. (Who, these days, has the chutzpah to open an album with an a cappella?) It turns out to be a genius move, sweeping away all possible distractions and presenting Cherry as plainly as if she walked up and presented her hand. Hiding in plain sight? Not here.