Record Store Day 2014 is fast on the approach, and Sub Pop has revealed what they have lined up for the April 19 event. The iconic indie label will drop four limited-edition releases on this year’s Record Store Day: a live album from Mudhoney, a 12-inch EP by Pissed Jeans, a 12-inch single from the Notwist, and a 7-inch single by singer-songwriter Chad VanGaalen.

Mudhoney’s contribution captures their 2013 performance atop Seattle’s iconic (and very tall) Space Needle, which was done in celebration of Sub Pop’s 25th anniversary. Dubbed On Top: KEXP Presents Mudhoney Live on Top of the Space Needle, the LP features a total of 10 tracks and is limited to 2,700 copies worldwide.

Meanwhile, the Notwist will package “Run Run Run” — a single from their just-released Close to the Glass full-length — as a 12-inch backed by two remixes and a new song called “Magnificent Fall.” That vinyl will be limited to 1,900 copies. 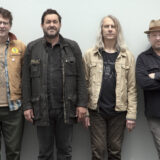 For his part, Chad VanGaalen will bundle four fresh tunes (none of which will appear on his forthcoming Shrink Dust LP, out April 29) onto a 7-inch that will be pressed onto 2,300 copies.

Find a full track list for all of Sub Pop’s Record Store Day releases below, and head over to the event’s official website to find participating stores.