Someone still loves you, Hinder 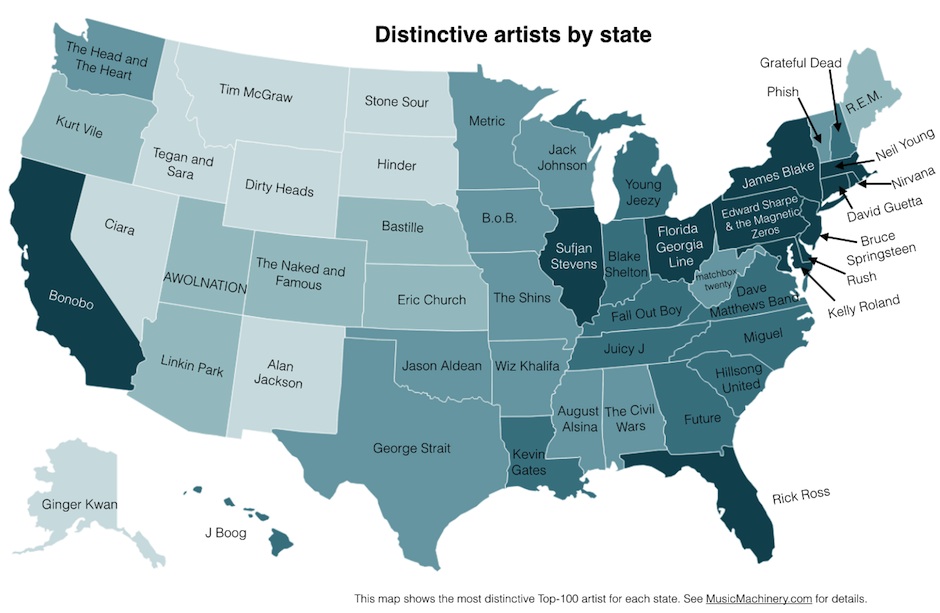 CREDIT:Map by The Echo Nest

The Echo Nest is one of the myriad behind-the-scenes technology companies that power the operations we know by more familiar names such as Spotify, Beats Music, or Pandora. According to the Massachusetts-based group’s blog, it has data on more than 35 million songs by roughly 2.7 million artists, which it uses to help drive 432 apps and services. You may have seen a map from The Echo Nest going around that breaks down music fans’ preferences for each of the 50-nifty United States. For the record, it doesn’t show each state’s “favorite” artist, no matter what you might’ve read (hat-tip to Tom Ewing for the statsplaining — more here). It shows the most “distinctive” artist for each state — in other words, the artists that are most popular in a given state versus the other states.

It’s a little confusing to us lay-stat-people, but specifically that seems to mean the artists that rank the highest in a certain state’s top 100 most popular acts but fall the furthest elsewhere. As an example, The Echo Nest’s Paul Lamere points out that the Christian rock group Hillsong United is hugely popular in Tennessee, but not at at all in New England. Still, according to the map above, Hillsong United are actually state-iest in South Carolina (the Volunteer State goes with its own Juicy J). That’s the mystical power of music, man.

Another caveat: The map only shows, as Lumere puts it, “the top most distinctive popular artist for a state that hasn’t already been selected for a more populous state.” In other words, the map might suggest a bit more difference between the states than actually exists. There are no red states and blue states, only these United States! Though if a less populous state than California is super into Bonobo, we want to hear about it.

There’s also an app you can use to play with the numbers yourself. On a personal note: B.o.B forever!