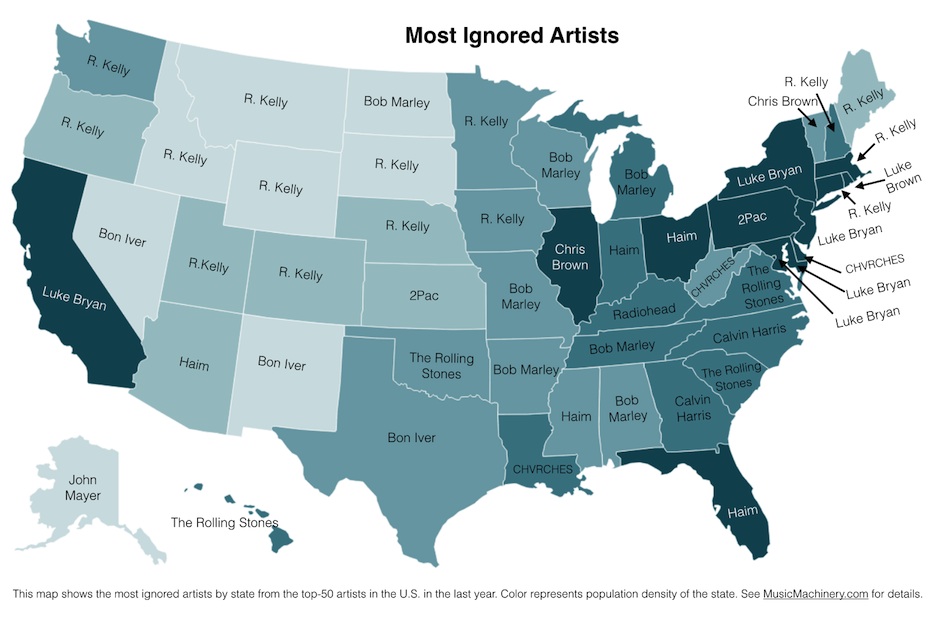 CREDIT:Map by The Echo Nest

UPDATE: Spotify has bought The Echo Nest, the company behind these maps.

Usually we don’t do this, but maps of the United States’ musical preferences are surprisingly popular, we’re not afraid to be servicey, and, well, here’s a little preview of the latest cartographic remix. Music tech company The Echo Nest has already shared a map of each state’s favorite artist and each state’s most “distinctive” artist. Now comes a map of each state’s most “ignored” artist, or the artist among the 50 most popular nationwide who is least popular in a given state. Mostly, as you can see, it’s a lot of R. Kelly, though Haim, CHVRCHES, Bob Marley, Bon Iver, 2Pac, Radiohead, the Rolling Stones, Chris Brown, Luke Bryan, and John Mayer all make appearances. These maps are based on the activities of 250,000 online music listeners, so take them with the appropriate grain of salt (a rep for the Echo Nest informed us that “Luke Brown” is not some widely loathed musician well-known in Rhode Island but not elsewhere, but a typo intended to be Luke Bryan). It would also be interesting to see how well Kellz-coverer Jimmy Fallon does in the anti-R. states.