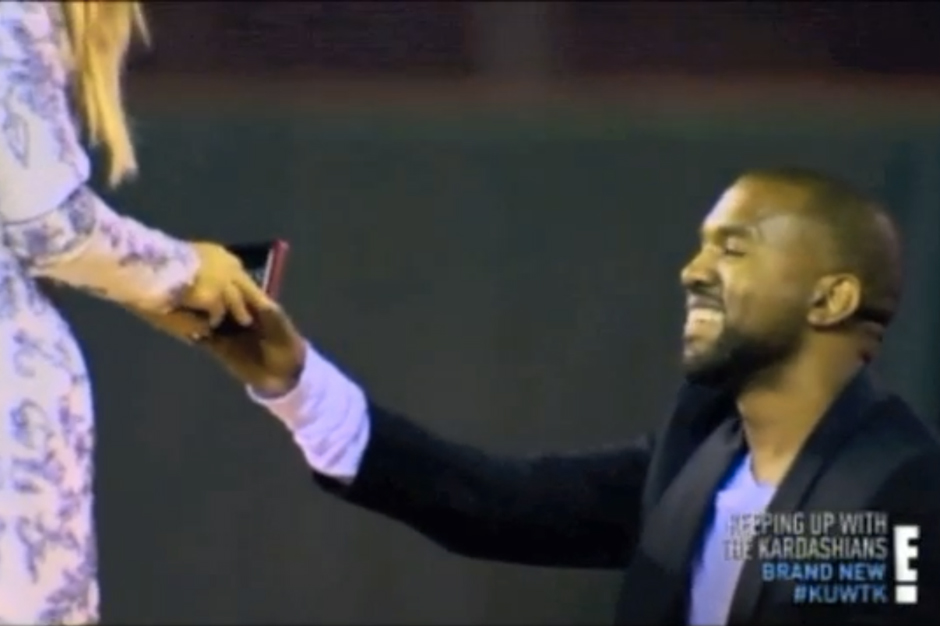 The worst first: Kanye West’s ridiculously lavish made-for-TV proposal to Kim Kardashian can now be seen, thanks to TV. E!’s Keeping Up With the Kardashians aired the thing over the weekend (Happy Valentine’s Day, common people) and you can now watch the expanded clip here, via Jezebel. While the pyrotechnics, orchestra, and baseball stadium are a wee bit much, when the man takes a knee it feels real. Also, when he dances to his own “Black Skinhead.”

And speaking of Kimye, West’s Yeezus-ending celebration of the marriage to come, “Bound 2,” has spawned a prequel, more or less. Kanye collaborator and TNGHT co-founder Hudson Mohawke played “Bound 1″ in full at a recent gig in Leeds, revealing a smoother, more organic version of the song (possibly pre-Rick Rubin) featuring altered lyrics, different vocals from Charlie Wilson, and an previously unheard outro. Check that out toward the bottom of this post.

Meanwhile, author Bret Easton Ellis has kinda sorta spoken about his previously reported upon project with West in a new interview with Vice. We already knew that these two auteurs are working on a screenplay together (they also collaborated on an American Psycho-spoofing Yeezus trailer, the music for The Canyons, and Ellis’ inaugural podcast), and now the novelist explains his motivation in taking on the still shadowy project:

“It was early summer last year and I was driving in my car,” Ellis recalled. “He’d given me an advance copy [of Yeezus] and I thought, regardless of whether I’m right for this project, I want to work with whoever made this. So fuck it, I said yes. And that’s how it happened. That was seven or eight months ago. We’ll see what happens.” As for when we can expect more: “It’s in Kanye-land and that’s subject to a whole other timeframe.”

And before we leave West’s World of Wonderment, one more stop. After ranting that he’ll rant no more in a December rant, our man is on a whole new rant-roll. Last week Kanye gently told Sway and Charlamagne Tha God to “shut the fuck up.” Below, you’ll find two 20-minute clips below from the spoken-word portions of recent Yeezus Tour stops. In the first video, from Newark New Jersey on February 15, he talks about leaving Nike for Adidas and Macklemore’s Grammy wins.

He also mentions Drake’s Rolling Stone beef, and suggests — as per his recent run-in with a racist youth — that it’d be worth the $250,000 settlement to throw some punches: “We love Drake. If anything, we are going to go after those motherfuckers and their negativity, because before they print shit like that, they need to check with me and him to see if it’s okay before they get ran up in their motherfuckin’ office. It only cost 250 to beat your ass.” (via Pitchfork)

Once you get properly amped up, come down with his February 17 stream-of-consciousness break in Montreal. Therein, West focuses on “quality of life” and discusses his predisposition to ranting in the process (plus, the mask-wearing, and avatars, and freedom, and how he “created” the sound of music’s last 10 years). “I want to contribute more to society,” he said, via Complex. “I wanna make life easier.” At the very least, he’s keeping it interesting.