First! Disney’s Frozen soundtrack stays in place atop the Billboard 200 like a liquid that has been, we dunno, solidified somehow. It moved another 93,000 units, good for 863K total. The song set’s fourth overall week at No. 1 marks the longest chart reign for a movie soundtrack since 2003. That’s entering the same rarified air as Bad Boys II, people. Plus, husband-and-wife songwriting team Robert Lopez and Kristen Anderson-Lopez now have less competition for the Best Original Song Oscar, what with Alone Yet Not Alone being DQ’d and all. Fellow nominee Pharrell has already been announced as an Academy Awards performer — with an Idina Menzel and/or Demi Lovato “Let It Go” rendition at the Oscar ceremony, Frozen‘s sales could (sorry) snowball.

2 to 10: Frozen didn’t keep its princess’ crown by much. The 2014 Grammy Nominees compilation was nipping at the wintry royal heels, selling 87K (up from 59K in its first, partial week). Speaking of the Grammys, Lorde’s happy days to follow Music’s Biggest Night have only gotten happier, as her Pure Heroine climbed 86 percent to No. 3 (68K). Attack Attack!’s non-crabbing offshoot Of Mice & Men’s Restoring Force enters at No. 4 (51K) in its first week, beating Beyoncé’s Beyoncé (No. 5, 48K) despite her Grammy-opening “Drunk in Love” duet. Another new arrival is Casting Crowns’ Thrive (No. 6, 43K), which also tops the Christian Albums chart.

This Is It, the Apocalypse: Katy Perry’s Grammys-enscorcelling combo with Juicy J, “Dark Horse,” maintains its lead on Digital Sales, topping the chart a second straight week with 373,000 downloads. Jason Derulo and 2 Chainz’s “Talk Dirty” holds steady at No. 2 (234K), and the song Pharrell will do at the Oscars, “Happy,” also stays in place at No. 3 (219K). The big movement on this chart came from Imagine Dragons’ “Radioactive,” which got an airing both at the Grammys and on Saturday Night Live — and both with Kendrick Lamar, who also appears on a new remix of the song. Downloads of the remix make up 73 percent of the song’s total this week. That’s good for its third-biggest sales week ever. Good kid, m.A.A.d. city, huge crossover. 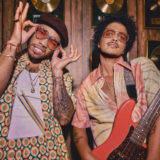 Super Bowl Streaming Champs: The Super Bowl is already having an impact on streaming. Spotify data for February 3, which won’t show up in the main charts until next week, shows a 226 percent leap-into-the-splits-after-James-Brown dance moves for Mars, a 97 percent jump-jump-jump for the “Google Ass,” admittedly unplugged Red Hot Chili Peppers, and a 172 percent boost for “Star-Spangled Banner” singer Renee Fleming. Bob Dylan was also up 32 percent, on the strength of his Dylanesque ads, and U2 gained 58 percent following their fund-raising single.