Eric Church Regulates the Charts With ‘The Outsiders’ No. 1 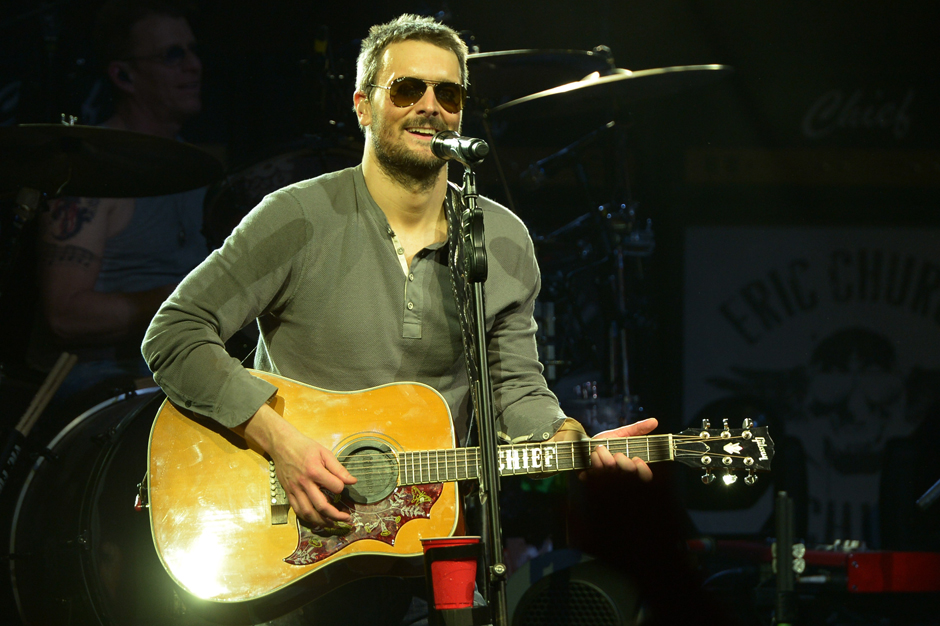 First! SPIN cover star Eric Church scores a No. 1 with his Essential-dubbed fourth album, The Outsiders. As our reviewer Michael Robbins wrote, the new set “has Tusk-magnitude ambition” and might make this Nashvillian “the first contemporary country act to remind you of Black Sabbath” to boot. And as Church himself put it in an interview with Rob Harvilla: “Ooh, there we go. One drop! That’s warm on the nuts. WHOO!” Okay, he was talking about spilled coffee, but the words still seem to apply. I mean, the dude brought so much pyro to Jimmy Kimmell Live! he nearly burned the place down. Also, he’s got the biggest sales figure of 2014 with 228,000 units moved, says Billboard. Dear world: gird your loins while this man’s on top.

2 to 10: So perhaps it’s the power of that man’s musk that’s driven all other newcomers away from the top 10 this week. The rest are repeats, though not a bad bunch. As predicted, the Frozen soundtrack nabs platinum status with another 100K sold (No. 2). The — ugh — Now 49 compilation slips to No. 3, doing another 77K for some reason. Beyoncé’s flawless Beyoncé rises from No. 7 to No. 4 with a 26 percent sales increase (48K). No. 5 goes to Bruno Mars’ Unorthodox Jukebox, now slowly working its way back down the chart following that Super Bowl bump.

Imagine Dragons grab No. 6, which is their highest position since August for Night Visions, an album that came out in September of 2012 (41K). Lorde’s Pure Heroine climbs a slot to No. 7 (39K); Toni Braxton & Babyface slip four rungs to No. 8 with Love, Marriage & Divorce (33K); Katy Perry’s Prism nabs No. 9; and who’s back in the running but Miley Cyrus, with Bangerz benefitting from an iTunes discount to the tune of 29K and a No. 10 slot.

Unhappy still: Pharrell’s Oscar-nominated Despicable Me 2 song “Happy” fails to unseat Katy Perry and Juicy J’s “Dark Horse,” which now tops the Hot 100 for the fourth week in a row. Those two win only by a muzzle though, as the man in the mountie hat tops Digital Songs. In terms of overall points (awarded based on just about every factor you can imagine), Perry’s 30 percent lead from the previous week has dipped to 5 percent.

Big step, bro: Congrats are due to Los Angeles trio Glitch Mob, who enter the Billboard 200 for the first time with their second album, Love Death Immortality (not actually a companion piece to the Braxton/Babyface set, but we understand the confusion). These dudes have been steadily sticking to their beefy, big-caliber guns in a city known for a far artier, more soulful approach to electronic music, and now they’re No. 13 with 22K sold.

The Glitch Mob on Their Harley-Davidson Inspired Sound