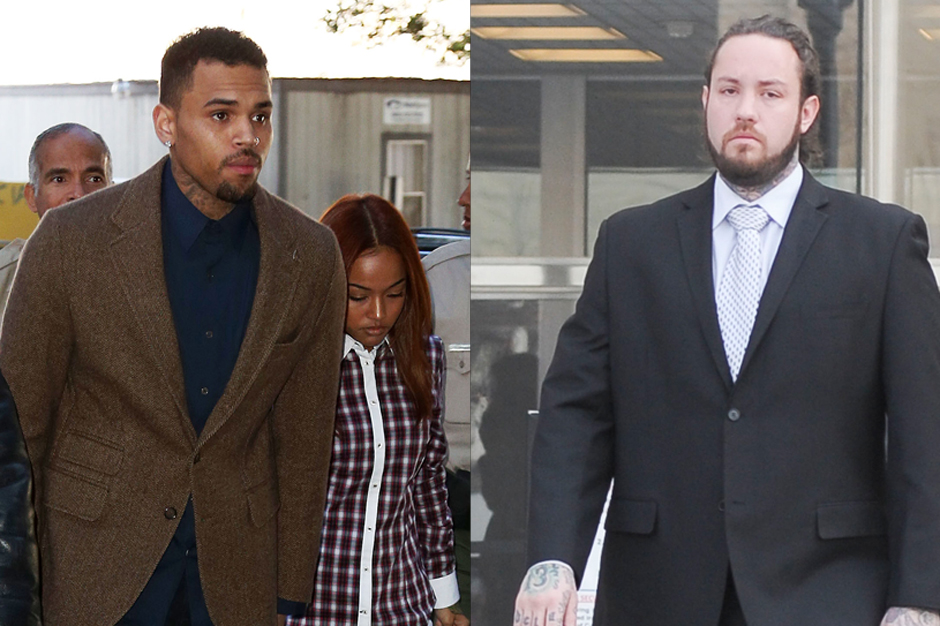 It’s pretty much a full-time job being Chris Brown, defendant. A week ago in Los Angeles, a man sued the R&B star for allegedly beating him up over a basketball foul. That news came shortly after a judge ruled Brown could continue his live-in anger rehab stint instead of going to jail because, according to the Los Angeles Deputy District Attorney, “he continues to pose an increasingly violent danger to society.” Now he and his bodyguard are being sued for $3 million.

Today’s legal action stems from an event that Brown rubberneckers should be familiar with by now. The singer and his hulking bodyguard Christopher Hollosy stand accused of beating up a male fan outside of the W Hotel in downtown Washington D.C. last October. The details of the event are hazy but alternately have involved Parker Isaac Adams, the plaintiff, either photo-bombing Brown, or trying to get onto the tour bus. The incident cost Brown his probation.

In January, he and Hollosy turned down a plea deal that would’ve brought this case to an end and resulted in a simple assault conviction. As The Washington Post reports, an April 17 trial date has been set for the criminal case, and lawyer for the defense Danny Onorato maintains that his clients are innocent of wrongdoing. Meanwhile, Adams has now filed a civil lawsuit with the Superior Court in Washington, seeking $1.5 million from each of the alleged assailants.

He told the Associated Press that the figures are both punitive and an attempt to recover money spent on medical bills, which include plastic surgery and sessions with a breathing specialist. The 20-year-old claims two of his female friends were posing for a photo with Brown when he attempted to join them, resulting in face-punching from both Hollosy and his famous client. Brown was still on probation for his 2009 beating of Rihanna at the time. And let’s not forget Frank Ocean.