There’s this band called the Beatles, see, and 50 years ago … well, if you’ve been exposed to any media recently you’re probably all too aware that Sunday, February 9, marked the semicentennial of the Fab Four’s legendary debut on The Ed Sullivan Show (see The Beatles’ 15 Greatest TV Performances). To mark the anniversary, CBS gathered Stevie Wonder, Dave Grohl, the reunited Eurythmics, and more for last night’s The Night That Changed America: A Grammy Salute to the Beatles. Online footage from the TV special is pretty limited, but while it lasts, you can watch Dave Grohl and Electric Light Orchestra’s Jeff Lynne tear into a faithful, Paul and Ringo-pleasing cover of Yellow Submarine‘s “Hey Bulldog” above. “I can honestly say that if it weren’t for the Beatles, I would not be a musician,” Grohl says to introduce the song, and it’s a treat to see his own daughter there in the audience to carry on the family’s Beatlemania tradition.

Below, see the Eurythmics’ Annie Lennox and Dave Walker reunite for an operatic take on “The Fool on the Hill.” Stevie Wonder was also there for his cover of “We Can Work It Out,” along with Beatles tributes from John Legend and Alicia Keys, John Mayer and Keith Urban, Imagine Dragons, and Maroon 5.

Elsewhere, Ms. Lauryn Hill capped “Beatles Week” on The Late Show With David Letterman by giving an impassioned, smoky-voiced rendition of “Something” — watch that here.

And another U.K. band playing a “really big” New York show, Arctic Monkeys, covered the Beatles’ Ed Sullivan tune “All My Loving” during a show over the weekend at Madison Square Garden — scroll down (via Consequence of Sound) for audio, followed by video (both fan-recorded). 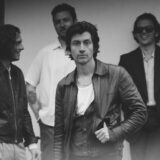