Sure, hip-hop is powerful stuff, capable of a mystical arm-twist or two, if the beats and rhymes and identities are properly aligned. But so is soca and opera and that infernal “Thank you for coming to Loews” theme I hear every time I stumble into a multiplex. Potentially, any of this music could inspire any one of us to gun down a state trooper on a Texas highway. But it could also inspire us to teach underprivileged youth to fashion potholders out of carpet remnants. Or vote Bob Dole out of public “service.” What gets lost in the bewildering censorship shuffle is that music — yes, even hip-hop — can still change our lives for the better like no designer drug, 12-step cult, or political frat party can.

My personal exhibit A for the past couple of years has been “Cornbread,” from Freestyle Fellowship’s influential but commercially invisible 1993 album Inner City Griots. Trying to answer his beatbox buddy Spoon’s still-relevant question — “Where in the hell did the hip-hop go?” — Aceyalone looked back, flipping through childhood memories (jellybeans, skateboards, polka-dot backpacks, double bunk beds) like he was doing card tricks with old photos from a shoe box. Then, still running the question through his mind, he was off killing a great white shark, jumping into a rocket with Davy Crockett, and returning home to find George Bush “cracked-out, butt-naked, watching the Cosby Show.” When he closed with a vividly unsentimental image of his future — as a “big ol’ black, wacky, tacky, black man” sittin’ on a rooftop listenin’ to the wind” — I got goose bumps.

But Edwin “Aceyalone” Hayes’s major-label solo debut doesn’t transcend the mumblety-peg, stick-up-kid cipher now referred to as rap only because of his lyrical ingenuity, though as a veteran of Los Angeles’s Goodlife “conscious” scene, he’s easily the MC equal of gangsta virtuosos Ice Cube and Snoop Doggy Dogg. With the far-reaching bebop-based atmospherics and scruffy playground beats of an ace West Coast production clique (the Nonce, Punish, Vic Hop, others), All Balls Don’t Bounce is a meticulously composed collection of hip-hop songs. Nimble bass lines ground Aceyalone’s metrical flights, or give him a lift when he zigzags into a freestyle cul-de-sac. Horn squawks and keyboard plinks subtly shade his ambivalent moods. The swooping strings of “Deep and Wide” and the rigorous rat-a-tat of “Mic Check” sound both dazzling and appropriate. This is an album so teeming with intricately funky renderings of life’s trap doors and open windows that you want to study it under the covers and show and tell all your friends, or eat it for supper and dessert and bust a Pavarotti-sized burp of appreciation. As one of Acey’s crew emphasizes on the intro to the “Knownots,” “We don’t represent out West / We signifyin’.”

Describing Romare Bearden’s collages, novelist Ralph Ellison wrote of the “sharp breaks, leaps in consciousness, distortions, paradoxes, reversals, telescoping of time, and surreal blending of styles, values, hopes and dreams which characterize much of the Negro American history.” On the rollicking, bluesy rumination “Headaches and Woes,” Aceyalone drops you smack dab into the present of that history, admitting that “a whole lot of us ain’t wrapped too tight,” as Onaji Murray’s vibraphone riff reverberates like a delightfully torturous migraine. But he’s not about to snap, like, say, a Wu-Tang crazy on a kung fu run. Aceyalone is not into spooky, role-playing switcheroos, literalizing metaphors when his imagination gets tired. On the eloquently stressed “Mr. Outsider,” he acknowledges, “You’re either a slave or Jesus got you saved / Or you don’t know how to behave but you’re brave / A mixed-up African with a finger wave.” But as he concludes against the chilly avant tick-tock of “Arhythamaticulas,” “Me, I’d rather be undefined, not underestimated or undermined.” 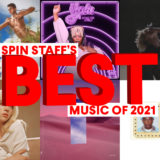 Staff Picks: The Albums and Songs We Loved in 2021

Here’s an MC with both the skills and maturity to challenge the received wisdom that hip-hop’s most representative face is a “nigga”-driven insane by the system, an irresponsible ghetto Sweetback. What’s most remarkable about Aceyalone, particularly in these dour days of hard-core vocalese, is the lively-up-yourself skip to his rhymes, how he twirls his thoughts on his tongue, flicks ’em out, snatches ’em back, and leaves you nodding and shaking your head. Imagine if Nas knew how to smile and rap at the same time, or if Method Man’s gold fronts didn’t pick up so much static, or if De La Soul’s Posdnuos was a wily extrovert. When Aceyalone depicts his neighborhood (the poverty-scarred Crenshaw district of South Central), it’s a community where you can envision people living as well as dying. When he goes off about problematic relationships with women, he’s unbelievably conversational — cracking silly jokes and reminiscing tensely. Never spiteful or patronizing, Aceyalone is proof positive that hip-hop is far from an aesthetically played-out, male-supremacist art form. Looking within and without for revelations, he suggests that possibly the most dangerous stereotyping we do is to ourselves.