New albums by Pharrell Williams, Rick Ross, Real Estate, the Men, Migos, and more are all currently streaming online, and, lucky for you, we’ve rounded them all up. Grab a set of headphones and dig in below.

1) Pharrell Williams, G I R L. “Pharrell Williams has called his second solo album, G I R L, ‘the album that I had always dreamt of making’ and predicted it would feel ‘festive and and urgent.’ The album includes the Oscar-nominated ‘Happy’… and features guest appearances by Daft Punk (of course), Justin Timberlake, Miley Cyrus, and Alicia Keys.” — SPIN (via iTunes)

2) Rick Ross, Mastermind. “On ‘War Ready,’ the Bawse and his former rival Young Jeezy put aside their differences to go hard and heavy over a bleakly burbling trap-imbued track punctuated with a wide selection of gun sounds. Ross sounds confident as ever as he shouts out various real-life gangsters, while Jeezy rhymes like he has an AK-47 lodged in his throat. Other Mastermind guests include Kanye West, Lil Wayne, Meek Mill, the Weeknd, and Big Sean.” — SPIN (via iTunes)

3) Real Estate, Atlas. “‘Crime,’ like the rest of Atlas, finds Real Estate at a new peak in terms of performance. In the time between 2011’s Days and the 2013 recording sessions for Atlas, the group expanded to include drummer Jackson Pollis and keyboardist Matt Kallman (formerly of Girls). Their joining, along with the guidance of producer Tom Schick (Rufus Wainwright, Sean Lennon, Low), has resulted in Real Estate’s fullest and most live-sounding record to date, an album that has muscle but never feels the need to flex.” — SPIN (via iTunes) 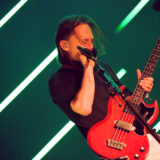 4) The Men, Tomorrow’s Hits. “The Men don’t like to wait around. Just after dropping the horn-aided romp ‘Another Night,’ the Brooklyn band is back with another taste of their upcoming album, Tomorrow’s Hits. ‘Different Days’ is a high-octane jaunt, fueled by an organ reminiscent of the Hold Steady’s younger, rougher years. It’s that perfect rough-around-the-edges, no-frills rock we’ve come to expect from them with the slightest touch of soul thrown in, a welcome addition to their sound.” — SPIN (via the New York Times)

5) Migos, No Label 2. “Migos made good on their promise and [have] dropped their No Label 2 mixtape. Some of the tape’s 25 tracks should already be familiar, like ‘Wait On It,’ ‘Ounces,’ and ‘Emmitt Smith.’ There’s also a new one called ‘Copy Me,’ which functions as a love letter of sorts to all ‘Versace’-flow jackers out there. Meek Mill, MGK and Rich Homie Quan make appearances, and most of the production work comes from Metro Boomin, Zaytoven, Honorable C Note and someone named Cheese.” — Fader (via LiveMixtapes)

6) Bryce Dessner and Jonny Greenwood, “St. Carolyn by the Sea”/Suite from “There Will Be Blood”. “Radiohead’s Jonny Greenwood and the National’s Bryce Dessner are collaborating on a classical-music release. On March 3, Deutsche Grammophon/Universal Classics will release a split-album collection of the two guitarists’ finest compositions: Three orchestral works by Dessner and a six-song suite from Greenwood’s score to Paul Thomas Anderson’s 2007 film There Will Be Blood.” — SPIN (via Pitchfork)

8) Baby Blue, Promenade EP. “Owen Ashworth was right: Casiotone is for the painfully alone. Los Angeles’ Jacob Loeb, better known as his synth-pop alias Baby Blue, can relate. After moving to L.A. from his hometown of Chicago in 2012, Loeb bought a secondhand Casio at Goodwill and has created his own brand of lo-fi Lonely Hearts Club electronics ever since. The result is Loeb’s debut EP Promenade, released today via L.O.O.S.E. and MANIMAL.” (via SPIN)

9) Helfer, Air Drops EP. “Israel’s Noam Helfer is a talented man with a mercurial sound. The young BLDG5 Records affiliate sings, produces, and plays whatever instruments his vibrant creations call for. Helfer’s Air Drops EP isn’t officially out until March 3, but it’s streaming here, now. Opening with ‘Now That You Came,’ the set greets listeners with a warm voice, a quick rhythm, and Books-style folktronica sampling. But in comes surging atmospheric bass and strange loops, and soon we’re in the middle of a moody dance track.” (via SPIN)

10) Axxa/Abraxas, Axxa/Abraxas. “Athens, Georgia native Ben Asbury a.k.a. Axxa/Abraxas has been crafting transportive psychedelic-pop gems in his bedroom for a few years before he was embraced by the Captured Tracks family late last year. On March 4, the 23-year-old will release the result of his transition to the label with a colorful, self-titled debut. Though the tape hiss that once filtered through the musician’s demos has been largely erased by Woods member Jarvis Tarveniere, who recorded and produced Axxa/Abraxas, Asbury’s full-length still manages to sound both homespun and epic.” (via SPIN)