What Does Stephen Malkmus’ Lesbian Ice Cream Taste Like?

Yesterday afternoon, Stephen Malkmus stood behind the counter of Momofuku Milk Bar’s Williamsburg location on the release date of Wig Out at Jagbags, his sixth full-length since leaving Pavement. The night before, the Portland indie-rock don turned up on Late Night With Jimmy Fallon, sliding through lead single “Lariat” with the Jicks. In a few hours, the Least Embarrassing Rock Dude of His Generation would lead his backup band in an in-store show at Generation Records, over in Manhattan. But now, at half past four in Brooklyn, it was time for ice cream.

One of Jagbags‘ best songs is “Cinnamon & Lesbians,” a cheeky homage to Oregonian tropes, so Momofuku Milk Bar created a flavor in honor of the standout’s title, to coincide with the record release. It’s unclear whose idea this was exactly — asked about the collaboration, a Milk Bar employee answered simply, “Friends” — but the ingredients were less nebulous, an indelicate mix of cinnamon, rosewater, and smoke. According to Stephen Malkmus, lesbians taste like incense. 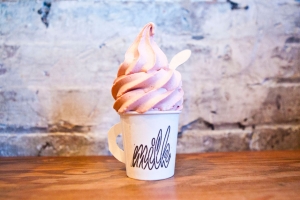 Unfortunately, the January weather was a rude host for the occasion. A polar vortex sent New York City’s temperature plunging to four Fahrenheit degrees, besting the date’s 1896 temperature record low of six degrees. It was the kind of day that was so unbearably frigid across the American nation that a Kentucky fugitive turned himself in to escape the cold. It was the kind of day snot froze.

It was not a day to promote a silly pink ice cream.

But at 4:30 p.m. there was Malkmus, bundled up in a bulky hood and blue scarf. There were his bandmates, languidly signing Gary Panter posters made special for the circumstance, behind cupcakes. And there were the eight lingering customers, standing around awkwardly and taking iPhone snaps as Wig Out at Jagbags played overhead.

So how did the ice cream taste? Like spicy perfume filtered with douche water. It was not very good.