Rose McGowan made her directorial debut at this year’s Sundance Film Festival with a disturbing and gripping short dubbed Dawn. Starring Tara Barr as a sheltered youth and Reiley McClendon as her seemingly dreamy beau-to-be, the film explores sex and violence in the early ’60s — a time that perilously preferred to wall off such subjects with white picket fences. Though this is the longtime actress’ first time behind the lens, her career has veered into this era before, often musically. She performed Peggy Lee’s “Fever” in an episode of Charmed, depicted singer Ann-Margaret in CBS’ Elvis series, and sung “You Belong to Me” for Planet Terror (part of 2007’s Grindhouse double-feature).

SPIN sat down with McGowan in Park City, Utah, and discovered not only that our hunch about her retro tastes was on point, but that she’s also prone to singing Sir Mix-a-Lot at family gatherings, and hiring entire brass bands while stoned. Listen in:

What inspired you to tell the story of Dawn?
I’m really fascinated by girl culture in that period. My mom, who just turned 60, was raised by that kind of a mother, where she wasn’t allowed to develop her own internal voice. Women in that era were particularly primed to please men. And to look and act perfect, which can — at any age, and for a male too — lead you down the wrong path.

Does music figure into the film?
Quite a lot. At one point, Dawn is reading a Tab Hunter interview — he’s more substantial than Justin Bieber, but he was massive — and trying to figure out how she should act on a date. He says, “I like girls that ask questions, but not too many questions,” and later you hear Hunter’s “Young Love” playing. So not modern music, per se… 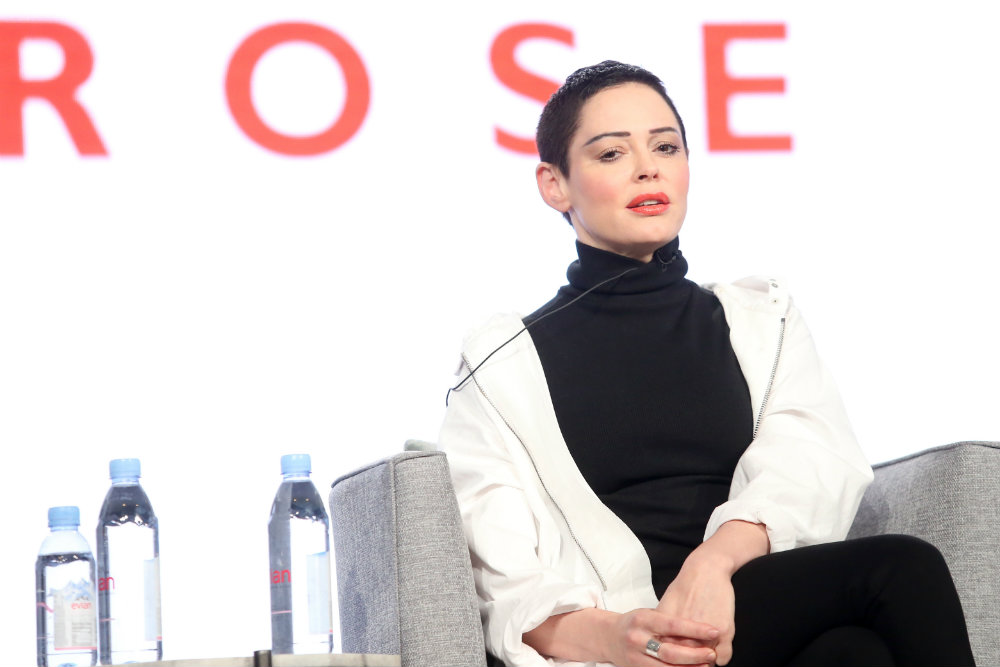 But that era of music is a recurring theme in your career.
I guess I just got lost in a stitch in time. I mean, I don’t go around trying to dress like I’m from another era, but I think my brain belongs somewhere else. I grew up listening to Maria Callas and Patsy Cline and Willie Nelson. I’ve sung on soundtracks, but I’d love to sing something that’s really old school and do, like, a club remix — something super fierce.

Who would you tap for that?
I’d want Woodkid to produce. He’s so musically talented.

What’s a song you listened to in the past 24 hours?
I was listening to Journey this morning, “Faithfully,” but not my fault — it was on the radio. But that guy has an insane voice. I went to the World Series in San Francisco once and everyone in whole the crowd of 50,000 sang “Lights” with him. So maybe Journey is a recurring theme, too.

What was your first musical obsession?
The Ink Spots. Nobody’s gonna know who the hell I’m talking about, but [sings in a smooth, ’30s-ballad style] “I don’t want to set the world on fire….’ That kind of a thing. Also, I became super obsessed with, duh, Madonna. She was very inspirational. She was homeless at one point, as was I, and I remember listening to her and thinking, ‘She could do it!’ I like strong women.

When were you homeless?
When I was 13. It was awesome. [Laughs.] Just kidding. I was taken in by transgenders and a transvestite — that part was dope.

What else about Madonna inspired you?
She gets knocked for her voice, but if you try to do scales and you go up octaves, you crack at a certain point and then you skip higher — she sings in that weird sweet spot, and I find that not a lot of people do her at karaoke because of that. Also, unlike Gaga, whose look changes every day, Madonna is quite smart with her image — it’s a new look for each period of her life. You need to keep evolving with your fans, because if you’re different every time you leave the door, where do you go? What’s left? Do you dress like a businesswoman?

Do you have a go-to karaoke song of your own?
I do. I did a really awkward one with my brother at Christmas. We sang Sir Mix-a-Lot’s “Baby Got Back,” and at one point the song gets quite sexual. We looked at each other like, “Well, this is awkward isn’t it?” And “Total Eclipse of the Heart” [by Bonnie Tyler] is hilarious to sing. I have a friend that does the high part. It’s pretty great.

Have you ever had your own band?
I do write songs. I wish that I hadn’t been a putz in school and learned to read music. But I don’t know if I would want a band, frankly. I would probably just want to hire people. Working with a collective would be inspirational, but having been around a lot of bands… it’s so damn dysfunctional. Because us actors are so totally normal.

How often do you write music?
I just finished my third song. It kind of just comes in waves. It’s from the perspective of one star talking to another. [Pause.] God, not, like, movie stars! I could give a rat’s fucking ass about that.

You were married in October. Any interesting music selections for the ceremony?
So I went to New Orleans and happened to meet this amazing 20-piece brass band on the street while I was super stoned. In that state of mind, I decided to fly them all to Los Angeles to play me down the aisle. I had them learn This Mortal Coil’s “Song to the Siren” [originally by Tim Buckley]. They’re all, like, 17-year-olds, throwing down from the Ninth Ward. They were amazing.

What was your and your husband’s first dance?
Busta Rhymes and Mariah Carey, “I Know What You Want.”