Call it the David Brooks bump. Two days after being name-checked by The New York Times columnist who once smoked pot but now favors it being illegal, the theme from obscure film Alone Yet Not Alone has lost its status as a 2014 Oscar Best Original Song nominee. The Academy withdrew the nomination, issuing a statement late yesterday citing “the appearance of an unfair advantage.”

The nod for the movie’s featured hymn had raised eyebrows from the moment it was announced earlier this month. A video for the song on YouTube had fewer than 4,000 views at the time of the nomination, the Christian-themed movie was so little-known that reviews site Rotten Tomatoes and movie revenue tracker Box Office Mojo couldn’t tell you anything about it, and composer Bruce Broughton was a former head of the Academy’s music branch. It all carried echoes of Al Walser, the little-known musician who found his way to a Best Dance Recording nomination at the 2013 Grammys.

Broughton’s role, it turns out, is what led to the Academy taking the unusual step of revoking a nomination. The composer, who was nominated for an Oscar for his score to the 1985 Western Silverado and has piled up 10 Emmys, remains a member of the Academy’s music branch executive committee. The Academy says he emailed members of the branch during the nominations voting period to let them know about his submission.

Academy president Cheryl Boone Isaacs said in a statement, “No matter how well-intentioned the communication, using one’s position as a former governor and current executive committee member to personally promote one’s own Oscar submission creates the appearance of an unfair advantage.” 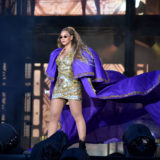 Broughton had previously acknowledged telling music branch members about the song, but maintained his contacts were innocent. He told Entertainment Weekly: “What happens is that the music branch of the Academy puts all the songs on a disc and I was concerned that this song would be really easy to overlook. So, yeah, I wrote some people and said, ‘Could you just take a look.’ That was literally the extent of the campaigning. I received in the mail songs from other films that were pressed and recorded CDs. We didn’t do anything like that at all.”

Broughton and lyricist Dennis Spiegel join a shockingly small group of people who have had their Oscar nods taken back. In 2010, The Hurt Locker producer Nicholas Chartier lost his tickets when he sent out an email campaigning for his film, but the movie didn’t lose its nominations. The few previous instances of nominations being revoked have tended to involve movies that turned out to be a year older than thought, such as when — as EW points out — the Best Documentary Feature winner at the 1969 Oscars lost its trophy for having been screened way back in ’67.

Apologies to Lana Del Rey, Taylor Swift, Grammy winners Sirvana, and anybody else angling for that open Best Song nomination spot: The Academy said it won’t replace Alone Yet Not Alone with another nod. That leaves four Best Song nominees, and you can check them out below. U2, Karen O, Pharell, and Demi Lovato/Idina Menzel, be careful what you email…