Backstage at the Grammys With Paul McCartney, Queen Latifah, Imagine Dragons, and More 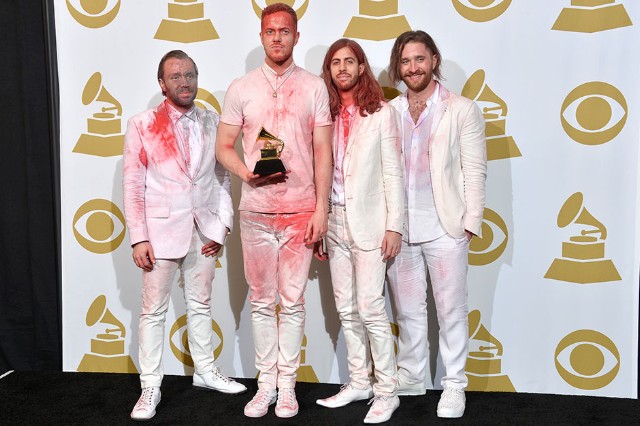 Darius Rucker is talking over Beyoncé. The queen is straddling her throne, grinding her surfbort on a pair of televisions to his right and left, but no one in the 2014 Grammys pressroom can appreciate this moment, because Hootie won’t shut his smug craw. He won a country statue for “Wagon Wheel,” a song sketched by Bob Dylan, made famous by Old Crow Medicine Show, and recorded by Rucker after he happened to stumble across it via a performance at his daughter’s high school talent show.

We only wanna be with Bey. But this is our lot, we journalists gathered in the “print” room — “No pictures,” we’re warned frequently, and censured if a cell phone peeks above shoulder height — in the guts of Los Angeles’ Staples Center, while elsewhere in that arena fabulous people are sitting comfortably while dazzling things happen before their fabulous eyes. Here, we are crammed into busted folding chairs — just lines of laptops, dented Pepsi cans, and torn-apart snack packs, waiting for visitors.

The only thing that keeps us watching here instead of on our own TVs is the promise that every so often, a Grammy-winner will be corralled onto the stage before us and forced to answer a few questions. We’ll never brush shoulders with Mrs. Carter. Jay Z won’t come see us, and neither will the Biggest Night in Music’s biggest names — Macklemore, Lorde, Pharrell, or even “The Robots,” as Daft Punk’s Guy-Manuel de Homem-Christo and Thomas Bangalter now seem to be exclusively known.

Instead, 30 long minutes after Rucker leaves, we get a jaggy Ben Harper, apologizing “that I’m rambling so fast” as his jaw grinds out words about his new blues album trophy at a furious rate. The eternally cool Charlie Musselwhite, 69, calmly impresses upon us that “Blues is not a fad,” while his recording partner jitters and tweaks, then grabs the mike to nearly yell, “This man is American music’s North Star. And yeah. And… yeah!” Jesus, Ben. Don’t you know they don’t even give us coffee back here?

But as the ceremony continues its televised downhill slide, things begin to look up for us: Dave Grohl comes bounding into the room with Paul McCartney, Krist Novoselic, and Pat Smear. Nearvana, attained. They rehash the details of their Sound City song, “Cut Me Some Slack” — how Dave thought they’d jam on some Beatles covers, but Paul was itching for something new, and/or an excuse to shred on the cigar-box guitar Johnny Depp had just given him, despite the band wanting to see him play bass.

“I wanted to play accordion, and everyone was like, ‘Ugggghh,'” Novoselic jokes. Macca admits he didn’t realize Grohl’s session pals were his Nirvana bandmates until they were mid-recording. Asked if they’ll combine forces again, the legend leaves the door open: “They’re great to play with, because they’re a great band. They were a great band with Kurt, and playing with them was a great privilege, a very special thing.” He pauses while mustering up a winning wink. “I should know.”

They leave, and we return to our collective stupor. During commercials, the screens go black, and all that’s heard is laconic typing and stifled mouth-breathing. A pair of camera-toting fellas wearing yellow “CREW” bands high on their arms like military personnel show up and capture us “at work,” in the trenches. R&B’s Lalah Hathaway appears, and when we have no questions, she asks us instead, “Y’all bored in here? You’re ready to go home, aren’t you? At least your feet don’t hurt. Thank you.”

Enter Ozzy. What’s left of Black Sabbath visits next, and Osbourne is immediately asked about his botch-job of the Ringo Starr performance intro. “I completely fucked it up,” he growlslurs. Well, what did he actually mean to say? “How in the fuck would I know?” Geezer Butler rolls his eyes, and twice restates queries from the crowd by screaming them in Ozzy’s ear. One of them: “WHAT IS YOUR FAVORITE BEATLES SONG?!” The answer, from Osbourne: “Mmmassshth Paul shhhmmm Wings blahhh.”

From there, we get Colt Prattes, Pink’s head dancer. Okay. And Kacey Musgraves sells out her genre by admitting, “One of my favorite compliments ever is, ‘Ya know, I don’t really like country music, but I like yours.” In between, Lorde’s Song of the Year win elicits gasps from our neighbors, and Alicia Keys gets mad chuckles for mixing up Johns Lennon and Legend. Because we missed the food handouts earlier, we are starving, and so steal fellow writer Steve Appleford’s Sun Chips when he’s away.

Renewed, we are ready for the peak pressroom experience: Queen Latifah, followed by Nile Rodgers. She confirms that she’d been sworn in by the State of California to perform the “Same Love” nuptial bonanza, and says, “I look forward to the day when presiding over a historic wedding ceremony like this is just the norm.” Obviously, she envisions a brand new day where televised mass marriages get their own basic cable channel.

She also defends hip-hop from those who’d call Macklemore its savior: “I actually don’t think that this is new grounds for hip-hop,” she corrects a journalist. “I think this is exactly what hip-hop is capable of … When I started it was much more common for rappers to speak about the topics others wanted to avoid. Any type of social injustice, we’ve always been able to talk about in hip-hop… but I hope this song serves as inspiration to new artists to tackle whatever subject they want.”

Rodgers spoke on his fight against cancer, the thrill of playing with Stevie Wonder, and the intent behind Daft Punk’s Grammys-crushing LP: “Most of the records we did back in the day, if you put the faders to zero, it sounded like the record. We had to play precisely, had to play in the pocket… Guy and Thomas chose to pursue that path of excellence… In today’s world, you don’t have to work as hard as they did to get a record like Random Access Memories, but then again, maybe you do.”

Then again again, maybe craft-committed bands like Nine Inch Nails and Queens of the Stone Age will have their performances cut off for a Delta Air ad, while those radio-preened sons of Las Vegas, Imagine Dragons, stand before us in this stuffy room and obnoxiously remind everyone that there’s an “s” at the end of their name. And then they have the gall to try and tell us things about Kendrick Lamar: “He’s so authentic. He’s a real artist.” If only Macklemore hadn’t “robbed” him of that. So long, #thegrammys.