Elliott Smith wrote some of the most bittersweet music of the past 20 years, so perhaps it’s only fitting that the revelation of three new songs featuring the late singer may turn out to be rather bittersweet news itself.

As Pitchfork reported yesterday, Soul Coughing’s Mike Doughty has uploaded three songs featuring Smith to the SoundCloud account of Doughty’s solo project, UUL. They’re unexpected, to say the least. “The Record” features Smith singing lyrics that would eventually evolve into “Bottle Up and Explode,” from his 1998 album XO; Doughty says that “Burn (Aah Fuck)” would eventually turn into Smith’s “Going Nowhere,” included on the posthumous collection New Moon. But all resemblance to Smith’s prior catalog ends there.

All three songs are full of hammering house beats, laser bleats, unvarnished synthesizers, and choppy vocal edits. Stylistically, they’re a world away from Smith’s own music, whether the stark, fragile beauty of his early acoustic work or the intricate Baroque pop of his final years. Doughty even tags them as “EDM,” a genre term that didn’t even exist during Smith’s lifetime. They scan, essentially, as dance music, albeit dance music that’s a little bit clunky, rough around the edges, and not particularly engaged with the culture of house and techno; don’t expect to hear them at Berghain any time soon. Whether you take them as hamfisted experiments or “outsider” interpretations will probably hinge upon your taste in beats and your appreciation for Doughty’s work in general. What they add to Smith’s own legacy is more complicated.

As Doughty told Pitchfork’s Jayson Greene in 2013, the two musicians got together in Doughty’s studio in 1998, in between Smith’s albums Either/Or and XO. “I just wanted to do something with him,” said Doughty, who had met Smith at New York’s Brownie’s nightclub, where the two musicians talked about songwriting and recording. 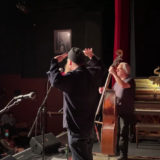 Doughty clarified the process in an email to SPIN: “Elliott sang a cappella. The idea was that I’d cut up the vocals, put them in an ASR-10 sampler, and play them, like I played, for instance, the Chris Rock sample on [Soul Coughing’s] ‘$300.’ He played piano guide notes for himself on the tune that he eventually turned into ‘Going Nowhere’ (they’re clearly audible on the song ‘Burn (Aah Fuck)’. I remember singing him beats, and trying to give him a sense of how vocal samples would live on top of it, but I think he was mostly just intrigued as a guy who was up for a new experience.”

“The cassette was raw vocals,” adds Doughty. “I messed around with hip-hop, big beat, and drum-and-bass beats, but, in the context of my band, I don’t think we could’ve done it justice.”

Recorded onto a Maxell XLII-S 90 cassette, those beatless, a cappella sessions never saw the light of day at the time. It was only recently, when he was moving his studio, that Doughty found the cassette and decided to write new tracks using Smith’s voice.

For those who find solace in the spiderwebbed softness of Smith’s music, the rigid drum-machine beats and cartoonish acid bass may feel like a slap in the face. And for fans who feel protective of Smith’s legacy, to release such un-Smith-like recordings without him having any say in the matter may seem like a violation.

A cloud already hangs over Smith’s posthumous recordings. His 2004 album From a Basement on the Hill was assembled and overseen by Smith’s family, with whom the musician had a profoundly tumultuous relationship. (Smith believed that his stepfather had abused him, possibly sexually, as a child.) Smith’s family chose not to involve producer David McConnell and engineer Fritz Michaud, who actually worked on the sessions, and they also shut out Jennifer Chiba, Smith’s girlfriend at the time, who arguably would have had special insight into Smith’s intentions for the record.

As Liam Gowing wrote in SPIN in 2004, “[A]lthough they showed some deference to Smith’s legacy by hiring as producers Rob Schnapf (the closest thing Smith had to a ‘fifth Beatle’) and Joanna Bohne (Smith’s former sweetheart, who helped with the mixing of Either/Or), the family ultimately decided which songs made the album. Several recordings originally intended for inclusion are absent. Some had no lead-vocal tracks, and might have been justifiably considered unreleasable — ‘See You in Heaven’ was one. But others withheld from the album had final vocal tracks recorded, and their absence smacks of censorship: ‘Stickman,’ with its lyrics about ‘killing sons’; and ‘Abused,’ with its chorus, ‘I’ve been abused… abused… abused.'”

Given the problematic circumstances surrounding the release of Smith’s posthumous work, it’s especially hard to know what to make of these new songs. Smith has been burned before; is it ethical to use his voice in this way?

“To be totally clear,” writes Doughty in his introduction to the songs, “this kind of track is exactly what he and I intended to make!” But of course we can’t know that; whatever intentions Smith might have had for the music he began making with Doughty are unknowable now. And even Doughty’s formulation, “this kind of track,” feels like a fudge; there’s no way that, in 1998, Doughty could have explained to Smith what kind of track he might make 16 years later.

We do know that Smith was concerned about his recorded legacy. As Gowing reported, Smith once asked McConnell if he could give the producer power of attorney, in the event of his own death. “He said he was seeking someone who could be an authority,” said McConnell. “Not over his career, but over what would happen to his body of work. He’d sit me down and say, ‘Now listen, this is very important. If anything happens to me, make sure this record comes out.'”

Is this a record that Smith would have wanted to come out? Again, we’ll never know, particularly given that Smith never heard any of the music itself. “It’s all new work, in terms of the beats,” acknowledges Doughty, adding, “He is, of course, so overwhelmingly beloved, by so many people, that it was scary to jump into the work. I had to remember that he wanted to do this because he saw this as an adventurous lark, and complete the tracks in that spirit.”

But perhaps that optimistic reading is the best way to approach these songs, as awkward as they sound. (Doughty really could stand to get a different drum machine; that bashed-out snare sound is awfully hard to take.) They remind us of the happier aspects of Smith’s personality, and the possible paths that his career might have taken. It’s painfully easy to remember Smith as a singer who was sometimes too strung out to remember the lyrics to his own songs, or who once, as Ellen Carpenter wrote of a particularly painful 2002 performance, struggled to play chords on his guitar, complaining that his fingers had gone numb and telling the crowd, “It’s like having stuff on your hand and you can’t get it off” as he shook imaginary goo off his wrist.

Imperfect (and one-sided) as they are, these songs do offer us a glimpse of another Smith: curious, open-minded, and eager to try new things. (When he sat down to record with Doughty, he was already taking what he perceived as a huge risk by writing music for Good Will Hunting; indie musicians tended to steer clear of Hollywood back in those days.) Even on his debut album, it was clear that Smith was as attuned to the sound of recordings as he was to songwriting itself, and as his work matured, he explored the expressive possibilities of the studio in greater and greater detail. Who’s to say that he wouldn’t eventually have turned his attention to the possibilities afforded by electronic music?

We do know that he liked to dance. “Elliott could pop and lock with the best of them,” his friend Robin Peringer told Gowing. He once “did the robot the whole way out of a club into the parking lot.” These songs aren’t all that we might have hoped for, but if it’s a chance to imagine him busting moves alongside Daft Punk at some alternate-universe Grammys ceremony, perhaps it’s enough.