Mr. Oizo feat. Marilyn Manson, “Solid” (Because Music)
Critics haven’t been exactly kind to Quentin Dupieux’s 2013 film Wrong Cops, the follow-up to his 2010 feature debut, Rubber; the Austin Chronicle‘s Marc Savlov calls the absurdist comedy “just a torturous series of blackout sketches hung together with the filmsiest of threads.” The same could probably be said about its soundtrack, which doubles as a sort of odds-and-sods collection of the French artist’s work as Mr. Oizo, except in the album’s case, its all-over-the-place qualities are part of its essential charm. He careens through puerile electro bangers (“De Luca,” featuring a MacTalker voice chanting, “Check that vomit on the floor”); dystopian experience in side-chained slow-mo (“Flip Bat”); C64 neon noir via “Lars Von Sen (X-Mas Version)”; the deranged squawks of an MPC on fire (“Peehurts”); thrillingly twisted electro-squelch (“France 7”); and cut-up electro house that sounds like a seasick Smith-N-Hack (“Positif”). One new song is included: the exceptionally silly “Solid,” featuring Marilyn Manson (fresh off his Wrong Cops cameo), who growls, “You look like shit when you dance.” Well, OK, then! Nevertheless, it’s a plenty punishing track, with the crispiest 808s this side of the deep fryer in the Roland employee canteen and a nervous, chromatic arpeggio that suggests trepanation by Roto-Rooter.

The Martinez Brothers, Givenchy AW14 Soundtrack
That the Bronx’s Martinez Brothers can make (and DJ) some cracking house music is no secret. But all that time behind the decks at DC-10 clearly isn’t cramping their style, either. Late last year, they dipped into psych-tinged boom-bap with their breezy, and surprisingly good, WARHOL*BASQUIAT EP; now, they do a complete 180 and dip their toes into the coldwave waters with a three-song soundtrack to Riccardo Tisci’s Givenchy menswear show for A/W 2014/15. It’s funny to think that they recorded this in Ibiza, if only because it’s hard to imagine anything sounding less Balearic. Metal drones and screwed EBM beats abound, and if the sound design isn’t quite as dreadfully sumptuous as Tri Angle artists like the Haxan Cloak or Evian Christ, they’ve got the soot-caked affect down pat. If Kanye’s planning a Yeezus 2, these two would be a great fit. 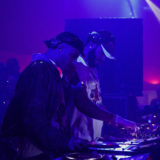 Cashmere Cat, Wedding Bells (LuckyMe)
Here’s a neat trick: Take trap and club tropes, usually used to broadcast an insufferably macho swagger, and turn them into something Charmin-soft. It’s as though the Norwegian producer known as Cashmere Cat (Magnus August Høiberg) had created the biggest, baddest, fist-swingingest club cuts around — rolling snares, concussion-grenade drops, fractured vocals — and swapped out the sample bank with a library full of dandelion tufts and lilac-tinted cotton candy. Full of harps, glockenspiel, brushed snares, and angelic voices — plus patty-cake handclaps and twinkling synths and something that sounds like a slide-whistle kazoo — it transmits the same sort of bucolic vibes as Four Tet circa Rounds, but the beat structures come straight from the Hudson Mohawke playbook. Who knew that rap-dance fusion could result in something this delightfully innocent?

Yør, Nachtwache EP (Shtum)
That Hamburg’s Yør calls his label Purple Maze tells you plenty about his muddled brand of house music, which puts a cobwebbed, crepuscular, and heavily skunky spin on the Dutch-Detroit axis. But the haze clears on his first EP for Uncanny Valley’s Shtum sub-label, putting new focus on his muscular midrange synths and urgent acid lines. It’s still plenty turbulent: In “Unter the Influence,” a serpentine bass line does its best to trip up the downbeat, and in “Agony,” slowly massing counterpoints build to a crescendo of ecstatic dread. File under “Late-Night Tracks for End Times.”

Midland, “Trace (Grain Remix)” (Aus Music)
Long before he adopted the alias Artwork and teamed up with Benga and Skream to form the dubstep trio Magnetic Man, Arthur Smith recorded as Grain, turning out scratchy, loopy techno for the FatCat label, of all places. Now, 12 years after his last release under the alias — the flickering, Akufen-like Untitled — he returns to it to remix Midland’s “Trace,” a glowering anthem from early last year. As is his wont, he cuts apart the vocal and lets the ensuing stutter guide a rhythm thick with rustling shakers and lazy syncopation. Its restraint is the polar opposite of Magnetic Man’s festival-sized anthems, but a slow-moving synth melody, which bears the imprint of Seefeel’s great Succour, keeps the grandeur factor high.