Belle and Sebastian Will Play at Sundance 2014, Plan New Album

In a subtle twist worthy of a Belle and Sebastian song, frontman Stuart Murdoch’s solo work has led to word of a new album from the Glasgow-based indie-pop heroes. Murdoch has gone off on his own to release an album, an EP, and a couple of singles for God Help the Girl, his musical-film project, and the picture is set to premiere this week at the 2014 Sundance Film Festival. Now, longtime U.S. label Matador has announced Belle and Sebastian will perform at Sundance. Not only that, they’re also headed to the studio for a new album.

The If You’re Feeling Sinister and The Life Pursuit troupe’s Sundance set takes place on January 20 at Sundance Music Café. Presented by festival sponsor Airbnb and Sundance Institute, the event will have only about 100 pairs of tickets available. They’re first-come, first-serve, and will probably gone by the time you request them by emailing [email protected]

Murdoch, in a statement, said: “On behalf of the group and myself, I’d like to say how excited we are to be playing a short concert at the bequest of the Sundance Film Festival. In Park City, in Utah, in the snow. Did I say how excited we were? I’m, like, vibrating.”

As for the new album, Matador says Belle and Sebastian are about to start recording. It will be their ninth U.S. album for Matador, depending on how you count, and their first released through Matador worldwide. No other details were available about the LP just yet. 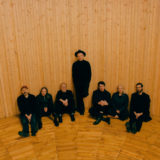 God Help the Girl was written and directed by Murdoch. It stars Emily Browning, Olly Alexander, and Hannah Muray, and other Belle and Sebastian members helped out in various ways on the music and the movie. The producer was Barry Mendel, whose film production career propitiously began with Rushmore.

Listen to “Stills” below.