Rap Songs of the Week: Kendrick Lamar and YG Hootie for President(s)

Big Baby Gandhi, “Boomerang”
A bit like Earl Sweatshirt’s “Chum,” what with the never-getting-off-the-ground chord organ beat and the regular-dude pathos and all. And that Earl song was already riffed on a few months ago via Danny Brown’s similarly fractured “Float On,” which puts this Big Baby Gandhi bonus track — in anticipation of his debut, called, um, DEBUT — in some very good, hard-spitting, self-effacing, I’mma-do-me company. BBG here captures the maturing-by-the-moment sincerity of Nas’ “Deja Vu,” while pretty much calling Björk his queen: “Rockin’ my shirts that I got from my father / Make me feel like the same man who washed up on the harbor / Despite my birth in the third world / I still feel at home in New York listening to Björk / She’s something like a goddess in my mind / Always rockin’ the banging beat, dropping the hottest rhyme / Plus you can tell she do mad drugs / And if she don’t do mad drugs she must be realer than life.”

Gorgeous Children, “Costly Bottle”
Can you be nostalgic for, like, two years ago? Just how unacceptable is that? You know, 2011, that tipping point for hip-hop eccentrics, wherein low-stakes excellent projects seemed to be coming out for free every few days, making it something like the blog-rap 1993? No, really, what happened? I don’t know, man. Point is, be happy that the ICE EP from a region-collapsing duo like Gorgeous Children even exists in 2013, when Internet rap has pretty much shriveled up. Here, beatmaker Gila Monster’s production is like a trap rap remix of Mike Post’s maudlin Law & Order cheez with sizzurp poured all over it, while rapper Face Vega does druggy undie-drift chanting about James Worthy and Cus D’Amato. “Costly Bottle” has been out for a while, but this track is the best way to start figuring out these guys. 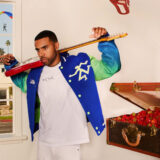 Trae ft. Kevin Gates, “Dark Angel”
Yes, it was Chance the Rapper’s sincere got-bars moment in 2013, the teen hero in a year in which lyrics dominated the mainstream rap conversation by way of Kendrick Lamar’s “Control” and Eminem’s million-plus selling word-nerd wild-out The Marshall Mathers LP 2. But the runner-up for Rapper of the Year must go to open-hearted street-rap tough guy Kevin Gates, whose The Luca Brasi Story and Stranger Than Fiction records were exercises in dead-eyed honesty and pummel-you rap skillz, and who, like Kendrick, was a welcome, step-your-game-up song-stealer (see Pusha T’s “Trust You” and Starlito’s “Luca Brasi Speaks”). On this track from Houston hero Trae’s I Am King, Gates double-times for two straight minutes, talking about doing too many drugs, being too depressed to even get a boner most of the time, and earning the right to reference Jay Z’s “This Can’t Be Life,” all the while finding something like solace in the act of recording raps.

Vic Mensa & Clams Casino. “Egyptian Cotton”
Wherein Chance the Rapper cohort Vic Mensa teams up with Clams Casino in a Hewlett Packard commercial that’ll help fund the next couple of projects that these rap-internet culture kids throw out there free of charge. Clams continues to toy with his #BASED beatmaker reputation, nodding to his Bay Area mobbin’ music influences that don’t get talked about that much, and creating something that the Neptunes wish they could still whip up (or, okay, Neptunes fans wish the Neptunes still whipped up). Meanwhile, Mensa stuffs hot nonsense (“Zetus lapetus, I might just take it to the moon / Mushroom cloud in the room when I make a boom / ?Hold your neck, put your hand like a surfboard”) into @ClammyClams’ cloudy- with-a-chance-of-club-banger beat.

YG Hootie ft. Kendrick Lamar, “Two Presidents”
Over a cozy synth-sequencing beat that sounds like the gobbling-painkillers score from Doctor Who: The Leisure Hive, Kendrick Lamar (the mainstream smart guy who everybody deservedly loves) and YG Hootie (a post-crunk, cult-ish, West Coast Waka Flocka Flame associate), both Compton rappers who couldn’t be any different (on paper, at least), bend the mindful hip-hop culture wars back to the Civil Rights movement: “Kendrick, Martin / Hootie, Malcolm / I’m screaming out ‘Peace’ but his chopper piece a bad outcome.” Once an all-inclusive hip-hop hating Stanley Crouch type gets ahold of this song, there’ll be a tizzy-triggering thinkpiece deluge, what with the suggestion that these two rappers somehow represent Martin Luther King Jr. and Malcolm X by way of differing rap values, but it captures the same dialectic that fuels the end of Spike Lee’s Do the Right Thing and makes the powerful suggestion that crack rap is an extension of the “by any means”-fueled political rap of the ’90s. It’s politically charged chill-out rap.