In the spirit of Neutral Milk Hotel‘s current reunion tour, Merge Records has dug up an old relic from the psych-folk project’s early days. The North Carolina indie label has shared a photo of a document containing the original master release information for NMH’s second album, 1998’s In the Aeroplane Over the Sea. The Facebook post is captioned as follows: “The original master release info for Neutral Milk Hotel’s In the Aeroplane Over the Sea, circa July 1997. It has sold more than we initially expected.”

According to the form, Merge expected the follow-up to 1996’s On Avery Island to move 5,500 units on CD and sell 1,600 copies on vinyl. (For context, Aeroplane ranked as the sixth highest selling vinyl of 2008, 10 years after its initial release.) The document also lists the record as being a self-titled effort, lays out plans for a tour of 30 or so dates, and credits NMH mastermind Jeff Mangum as the “decision-making band member.” Also not-at-all surprising: Mangum’s phone number is listed as “Disconnected at the moment.”

Check out the Master Release Form below, then scroll further for a long list of Neutral Milk Hotel’s 2014 tour dates. And for an in-depth look at the legacy and influence of Merge Records, read SPIN’s feature Merge Country: How Superchunk’s Label Turned Durham Into a Thriving Indie-Rock Company Town. 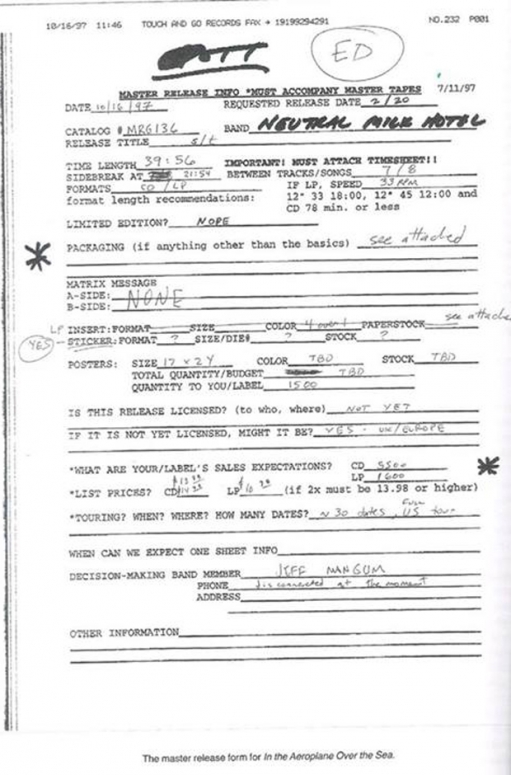