‘N Sync member Joey Fatone is the new spokesperson for hair restoration company Bosley — yes, one of those places with the “order now” television ads starring famous-ish people. Oh look! There’s one of those above! And the boy band alum isn’t the only dude in the clip. Therein, worlds collide as The Brady Bunch middle kid Christopher “Peter” Knight also has very enthusiastic things to say about his awesome head of hair. To be fair, it’s a pretty brave move for any dude.

“Performing in front of a live audience can be pretty intimidating, so having a full head of hair was important to me,” said Fatone in a Bosley release, shedding light on the still largely unexplored behind-the-scenes of ‘N Sync’s salad days. “Back then, I was the only one in the group getting thinner on top and I started wearing hats. It was pretty intimidating. That’s life, but the beautiful thing is that now you can do something about it. The answer for me was going to Bosley where lots of celebrities go.”

The same release also included insight on Fatone’s decision to get involved with these experts in follicular artistry, writing, “Joey Fatone of ‘N Sync has revealed his new hair, his own real hair, provided to him by Bosley, the world leader in hair loss solutions and medical hair restoration. Like millions of people, Joey found that he had to reinvent himself, launch a new career, and deal with the economic changes before him. He took action.” Indeed, he became a spokesman.

It’s worth noting that Fatone, 36, seems to have had pretty decent coverage up top to begin with. Bosley has provided one of their handy “before and after” photo comparisons and the ‘N Sync star just seemed to be experiencing some light thinning (so, “Hollywood bald”), exposed by an intentional attempt to muss up his locks. The second shot is taken from a different angle entirely, so it’s hard to say if this is a “Together Again” scenario, or if a “Bye Bye Bye” was ever in order.

Meanwhile, find out where Justin Timberlake landed in SPIN’s 50 Best Albums of 2013. 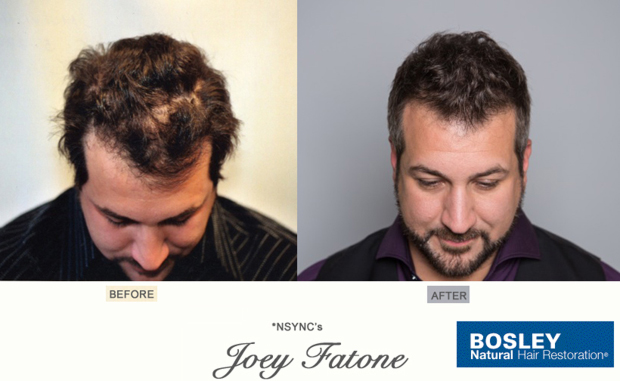 The 20 Greatest Max Martin Songs That Never Topped the Charts