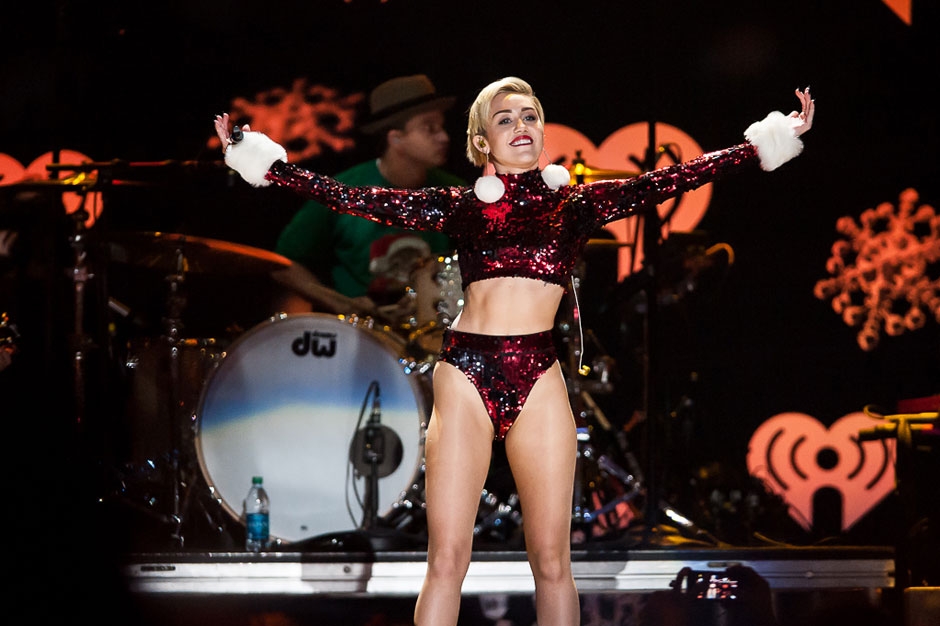 Miley Cyrus recently defiled Santa Claus on the Madison Square Garden stage at Z100’s annual Jingle Ball, but the twerking girl couldn’t steal the show at KISS 108’s Jingle Ball in Boston because of weather conditions. Still, that didn’t prevent the station from acting as if Miley was there the whole time. Gawker notes that all throughout the night of the December 14 showcase, KISS 108 ran radio segments that claimed the “Wrecking Ball” singer was wreaking havoc at TD Bank Garden when she was, in fact, stuck in New York City.

One spot insisted “Miley’s already twerking,” while another announced, “She’s about to go onstage and soundcheck. We’ll bring it to you live.” False.

“It’s kind of surreal, like, when you’re just walking backstage and you literally, like, bump into Selena Gomez or Miley Cyrus or Fallout Boy,” one DJ said. “They’re all here.” Sorry, that’s another fabrication — the Bangerz star was nowhere near the backstage area. Could the entertainment industry really just be built on a heap of lies?

Of course, the various advertisements and “on the scene” reportage were likely recorded beforehand, or, as journalist Maura Johnston pointed out on Twitter, at one of the other Jingle Ball gigs happening around the country. And, to be fair, KISS 108 did eventually admit that Miley couldn’t make it up to Beantown by calling her for an on-air interview (and sending out a tweet that acknowledged the last-minute disruption).

Listen to a mix of the bogus boasts — and the Q&A that admitted Miley was in NYC — via the SoundCloud stream below. For an in-depth look at Z100’s Jingle Ball, flip through SPIN’s photo gallery of the concert. And for all things Miley in 2013, check out The Year in Miley Cyrus and The Year in NSFW.