Walking on Thin Ice: A Career-Spanning Conversation With Yoko Ono

Yoko Ono is the muse. Not just for John Lennon, whose love and devotion for her resulted in some of the most beautiful, and most interesting, music of his career. A pioneering artist, musician, activist, and feminist, Ono has influenced immeasurably those artists daring enough to push at and experiment with the imaginary boundaries between art forms and media. Without Ono, who knows whether the work of firebrands ranging from Lady Gaga to Kim Gordon would exist, or how differently we might see it? Her force is such that even in the face of her husband’s murder, the vilification of misogynists and racists, of the government warmongers who would oppose and profile her, she refused to be deterred. Ono’s talent is formidable, but perhaps her most prominent quality is her spirit.

Ono, who recently turned 80, was born in Tokyo in 1933 and first came to New York City to attend Sarah Lawrence College. There, she began her first forays into the art world (along with her friends, Johns Cale and Cage) and by the 1960s was exploring her work with the Fluxus movement. One of Ono’s most important performances, 1964’s Buddhism-influenced “Cut Piece,” invited the audience to approach her with silver scissors and snip off pieces of her dress. The artist statement for the piece read: “People went on cutting the parts they do not like of me finally there was only the stone remained of me that was in me but they were still not satisfied and wanted to know what it’s like in the stone. P.S. If the butterflies in your stomach die, send yellow death announcements to your friends.”

From the beginning, death, giving, and living have been Ono’s major themes. After Lennon was killed in 1980, her art became more acute, more emotional, more powerful. The photograph on the cover of Season of Glass, the solo album she released in 1981, features Lennon’s bloodied glasses next to a half-empty/half-full glass of water, with the New York skyline standing in the background. The album’s “No, No, No” is a funereal dance song, beginning with four gunshots and a peal of Ono’s heartbroken wails. It’s also the ne plus ultra of what some people find so objectionable about Ono’s music: the screeching, the screaming, the unbridled emotion. But more than that, the song is proof of her gift. There’s a purity of intention that, over the course of so many years, remains unmatched.

While Ono was touring the world, SPIN exchanged emails with the artist about her process, how she experiences art, and Take Me to the Land of Hell, the new album.

How does the process of performing your artworks connect with performing your music? Does the feeling of performing differ based on medium, or are you more focused on the end result?
Each work is different. It all depends on what type of piece it has been conceived as. It could be a piece with just one piano. It could be a piece with an orchestra. The original intention can change too. The process is always the same. I get an inspiration for a new song, I put it down on paper immediately so I won’t lose it. When I am ready to go to the studio with it, I play it a few times on the piano and edit, add, and type the lyrics and take it to the studio. Sometimes I don’t have anything on paper. Sometimes I just get the idea of the song at the studio and write it down at the studio. Of course, there are one-liner songs I just do without putting it on paper, hoping that the musicians can follow me.

I must add that there is a total excitement I feel once I come up with a song — and [it lasts] until the song is done to the point that it can be mixed, strung with the other songs, and mastered. My heart is mysteriously alive in the world of sounds — a totally different dimension from the daily life.

Do you consider the act of performing with your band a form of performance art?
Not really. Each work of mine is already defined as to what form it will take when it is conceived — the medium very rarely changes.

Some of your early art has dealt with the impermanence of objects and the ritual of eliminating them. Does songwriting fit into that vision?
Actually, it doesn’t. Every note or passages of notes even made in rehearsals are usually saved as material I could use later. Well, that’s probably an unusual thing to do. It comes from the idea of keeping unused bits and pieces of negatives when I make films. 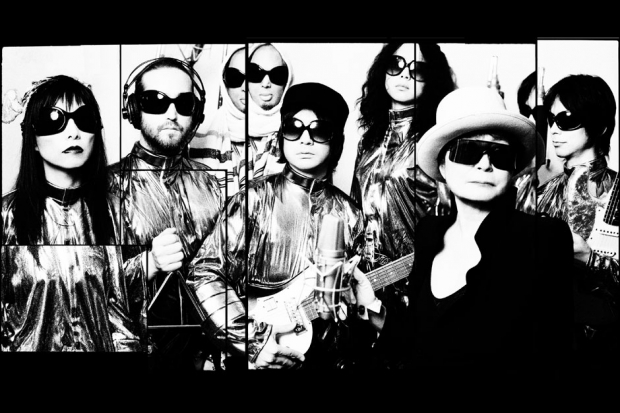 I’ve read that you think of your art as a part of your lived experience. Is that true? How much comes from pure emotion? Does it differ depending on the medium, song, or piece?
It may come from my life experience, in a sense that it could be inspired by a certain incident in my life, but they then get refined into symbolic and/or surrealistic poetry. You will have a hard time to match it with what happened in my life.

Earlier this year, Opening Ceremony produced some of your clothing designs, and they included awesome functional style elements, like the incense holder on the boot, or, you know, clear butts. You also showed up to the line’s debut wearing a cool top hat decorated with monkeys. A lot of fashion designers try to think of their clothing as objets d’art. Where do you fit on that continuum? How do you think about your designs?
I did fashion design as early as what was put in my book, A Book of Instructions: Grapefruit (1964), with the idea that the combination of clothes and human body made great sculptures with movements. Of course, it was meant to be “far-out clothes to wear” as well. I was into dispensing with borderlines of art in general.

So much of your work is about woman power and so much of it feels imbued with hope. Do you think the two are connected?
Let’s face it: What most women were forced to be by social convention was to be slaves without financial independence. In a situation like that, was there anything other than hope we could rely on?

A lot of high-profile musicians are involved with performance art on a gallery level now. Jay Z interpolating Marina Abramovic’s “The Artist is Present” for his “Picasso Baby” video, for instance. Do you have any thoughts on why commercial artists might be interested in more avant-garde avenues at this point in time? Sound as medium has an incredible elasticity. So, of course, it is tempting for artists of other fields to try something with sounds. Why not? We are living in the age when there is no limit in gathering all forms of art and music to mix it together if you so desire.

Earlier this year, you chose Peaches to perform your famous “Cut Piece”— you’ve never selected someone to do it before. Why was she the right person?
She was extremely right, as she is a highly established performance-art artist. Sure enough, her performance of “Cut Piece” elated all of us who were watching. It was a very spiritual experience for all of us. Of course, you are taking a chance on how the performance would be like — similar to the situation when you assign a pianist to play your song. But the piece itself has a protective measure, if you can call it that, to keep the various symbolism of the work intact, whatever is done to it by the performer. 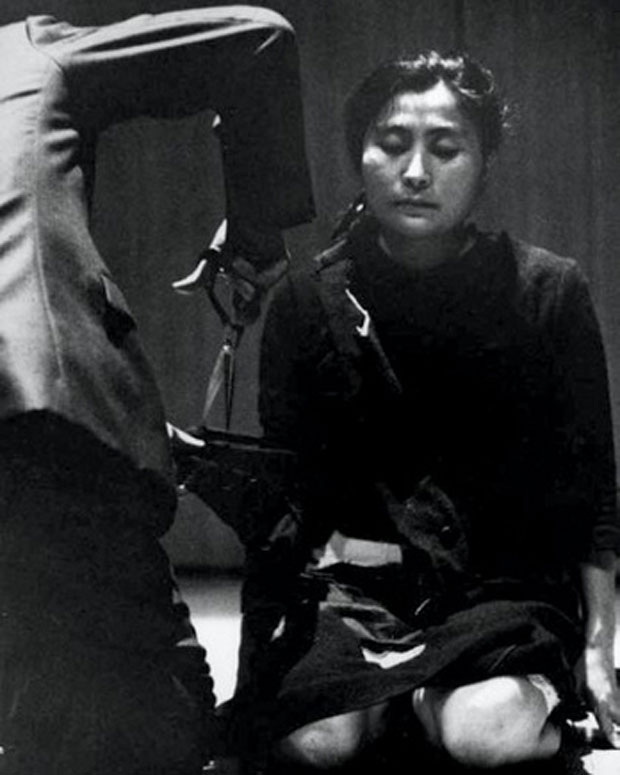 You new song “Bad Dancer” feels like a take on the strip club anthems of Atlanta, while its video is a reclamation of “bad” dancing. Can you tell me about that song?
I love to dance. Any dance movement is interesting and ends up being great as it reminds you of our natural body and it’s movements. I say “reminds you” because we are losing our natural body movements every day by forcing ourselves to become part of the social ritual. Some people think that movements, such as the movements in ballet, are a higher cultural expression, whereas some are just dirt. I think it is elitist to think that a trained movement is more acceptable than untrained and possibly unrehearsed movements. Dance is fun. I am proud of what we did in the “Bad Dancer” video. We rocked!

ARISING, your upcoming installation in Venice, invites women “from all over the world to send a testament of harm done to you for being a woman.” It seems very rare that women are invited to talk about harm that has been done to us. How did you conceive of the project?
My uncontrollable anger made that piece, hoping that women’s plight, the very subject you are mentioning here, would get some attention.

Was there one art piece or experience that you’ve done that made you grow the most as a person?
Each time I create a work, I get so much energy and awareness I grow rapidly. People think it is the other way around — that I have energy and therefore things get created with that energy. No. I create, and therefore, I get the energy. I want to address this to artists who are feeling a bit low. Just start creating something, without consulting your critical eyes, ears, and brain. Keep creating even if you are laughed at. Good luck and I love you with all my heart!