Organizers for Lollapalooza have announced the lineups for two of the festival’s South American outposts. Now in its fourth year, Lollapalooza Chile will next take place on March 29 and 30 at Parque O’Higgins in Santiago. Arcade Fire, Nine Inch Nails, Soundgarden, Red Hot Chili Peppers, Phoenix, Vampire Weekend, the Kim Deal-less Pixies, and New Order are all on the bill, along with many others.

Every one of the artists mentioned above will also be playing the first-ever edition of Lollapalooza Argentina, which will be held at the Hipodromo in San Isidro on April 1 and 2. Other acts performing at both the Chile and Argentina events: Savages, Lorde, Johnny Marr, Julian Casablancas, Ellie Goulding, AFI, Baauer, Imagine Dragons, Axwell, Kid Cudi, Portugal. The Man, Flume, Flux Pavilion, PerryEtty vs Chris Cox, the Bloody Beetroots, Capital Cities, Krewella, Cage the Elephant, Jake Bugg, Wolfgang Gartner, Jovanotti, Onda Vaga, and Nação Zumbi.

For more information and to purchase tickets to Lolla Chile, head over to the festival’s official website; if you’re planning to visit Lolla Argentina instead, check out that fest’s website.

Meanwhile, the third installment of Lollapalooza Brasil is booked for April 5 and 6 at the Interlagos Race Track in São Paulo. The lineup for that showcase won’t be revealed until November 11, with pre-sale ticket offers beginning on November 18.

Festivalgoers in the U.S. will have to wait until August for Lollapalooza’s next trip to Chicago. Perry Farrell’s three-day circus will once again take up residency in Grant Park from August 1 through 3. For a refresher on Lollapalooza 2013, check out the 50 Best Things We Saw.

Scroll down for the video announcements and posters for the upcoming Lolla Chile and Argentina events. 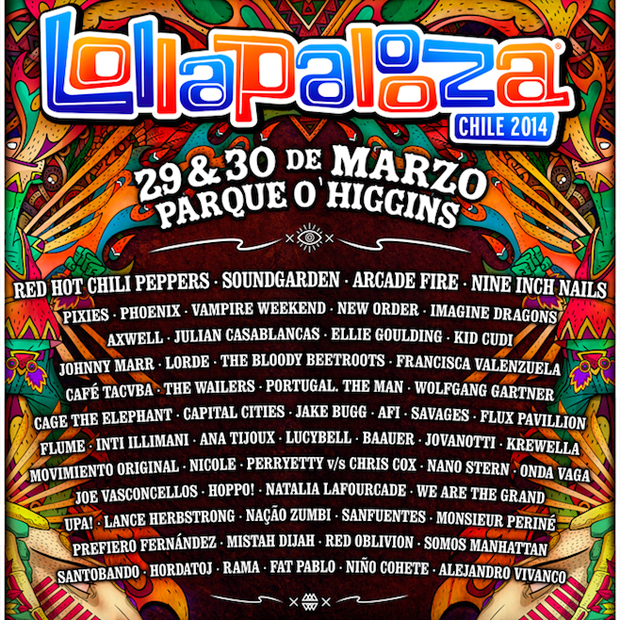 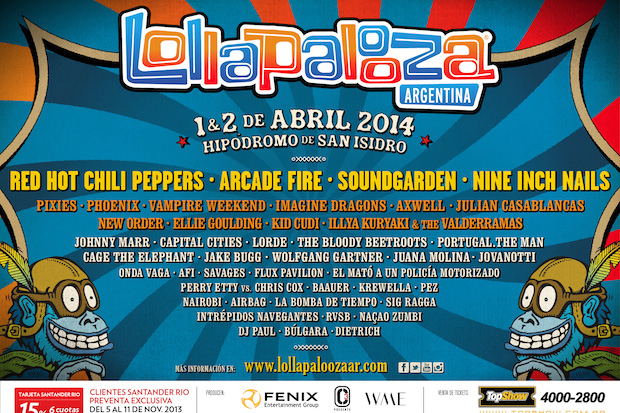