But spokesperson confirms the Detroit rapper did use a vocal track 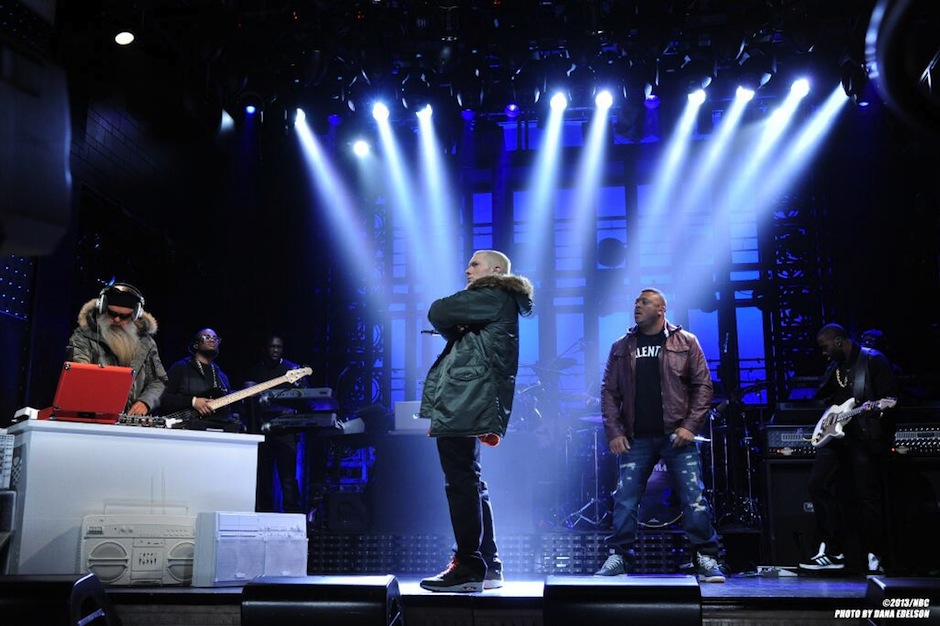 Eminem’s rap-rock verbal showcase The Marshall Mathers LP 2 is out today, and his YouTube Music Awards “live music video” was warmly received, but his camp is still fighting off a public perception the gifted MC phoned in his Saturday Night Live performance. A rep for Slim Shady tells various celebrity-news sites the rapper wasn’t lip-syncing, though he was rapping over a vocal track. “He only does it sporadically through the songs,” the rep told E! News. “They’re accent tracks.”

To recap, when Eminem performed “Berzerk” and “Survival” on SNL’s Kerry Washington-hosted November 5 episode, many Twitter users pointed out he appeared to be lip-syncing. Gossip site TMZ went so far as to say that if he didn’t lip-sync it, “we’re a monkey’s uncle.” Here at SPIN, we weren’t so sure, but we did say the appearance of lip-syncing was the real problem: “Here’s the guy who wins every rap Olympic gold medal, and he couldn’t even convincingly appear to be swimming,” we wrote.

Frankly, it’s hard to see how the current statements address that last criticism. Especially since the denials come with an acknowledgement that viewers were correct in believing some of the words they were hearing were not coming live from Eminem’s mouth. We guess it depends on what your definition of “lip-syncing” is?

It’s not that lip-syncing is a big deal, at all. When Beyoncé lip-synced the National Anthem at President Barack Obama’s inauguration earlier this year, it was not the massive Beltway scandal some pundits pretended it to be. Shouting along to a backing track can even be a way of breaking down the wall between performer and artist, as cult-beloved Swedes the Tough Alliance have shown.

Lip-syncing — okay, rapping along with a backing track — may be like the recent revelations of the United States spying on allied leaders: Everybody does it, but you’ve got to keep up plausible deniability.