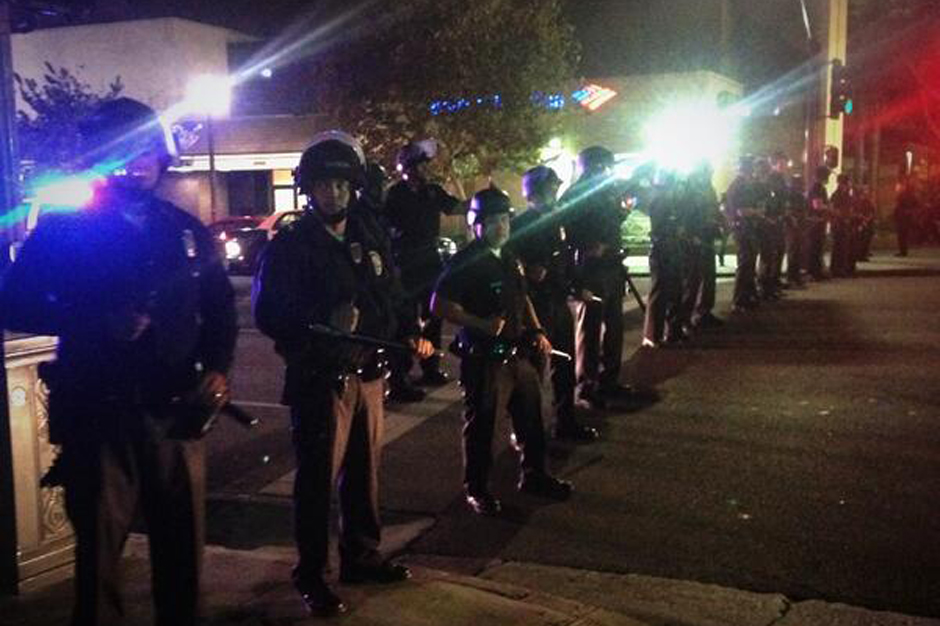 A Tyler, the Creator show was canceled before it began in Los Angeles after riot police arrived to break up a crowd outside. The October 11 gig was meant to be a preview for Odd Future’s upcoming second annual festival, the OFWGKTA Carnival at the L.A. Coliseum, on November 9. But the vehicle chosen for the hype-building event was the intimate Low End Theory club night — ground zero for the city’s electronic music underground — held at The Airliner, a 140-capacity venue in the East L.A. neighborhood of Lincoln Heights.

LAPD Officer Norma Eisneman told LA Weekly, “The event was at maximum capacity and the bouncer wasn’t letting people in. They became unruly.”

Tyler was scheduled to perform with Flying Lotus — the latter in his rapping Captain Murphy guise — along with unannounced guests, and the show had been announced at least a week ahead of time. For context, due to the venue’s small capacity and outsize buzz, promoters typically don’t even announce a FlyLo set until the day of. According to Low End organizer Daddy Kev, some fans had begun to camp out for Wednesday night’s show as early as 11 a.m., and there was a noticeable line by 2 p.m. But everyone was eventually sent home.

Kev explained the situation by phone: “Basically, at about 10:10 p.m., 40 minutes after we’d opened the doors, four or five dudes tried to rush the door. Our security closed up shop so we could get the situation sorted. I walked outside to see what’s going on and people are calm, but at this point the line has dissolved — there are too many looky-loos, and people are spilling into the street. A squad car rolled by and gave us a little ‘bloop bloop,’ and then there are two cars, and then 10, plus helicopters and the rest. They were doing their job.”

Before the riot gear came out, Tyler went outside, hopped on a car, and tried to convince the crowd to get back in line. Of course, they just gathered closer and took pictures of him (see below). When it became clear that the show was over, Kev and his staff ushered those already inside out, and attempted to refund as many of the $10 door fees as possible. According to NBC, who had their own helicopter at the scene, the crowd obeyed authorities and eventually broke up without any arrests or injuries — just disappointment all around.

“Flying Lotus was bummed — he’d rehearsed all of these songs. We were all disappointed,” said Kev. Tyler voiced his own complaints via Twitter. While police, the venue, and ultimately even the crowd all handled themselves well enough, Low End Theory’s boss acknowledged he’s approaching future high-profile shows more warily. “Hindsight being 20/20,” he said with a sigh, “we’re never announcing an artist of that stature ahead of time ever again.” No word yet as to whether a makeup show (elsewhere) will be booked.

The above photo comes courtesy of Twitter user DREdivinity (via LA Weekly). The same fan also shared this image of the Odd Future leader clearly trying to calm folks down.