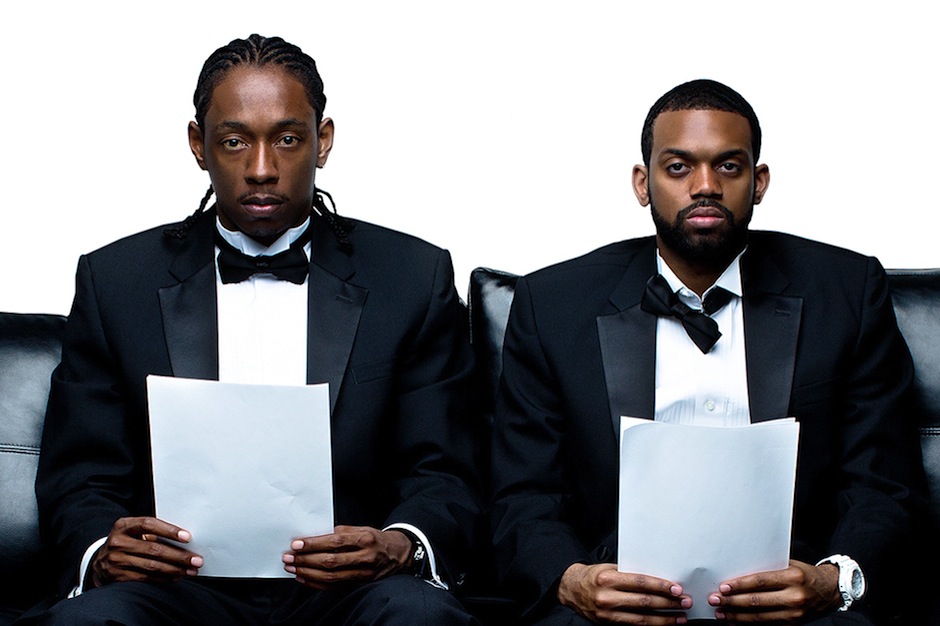 Armand Hammer, “Shark Fin Soup”
A collaboration between rappers Elucid (a through-his-teeth syllable-slinger) and Billy Woods (an all-topic-sentence shouter), Armand Hammer is thoroughly bugged-out underground stuff. You know, the kind where the closest thing to a hook is a few particularly evocative rhyming lines that strike you as kind of catchy through repetition alone, though they’re more like an anchor for the verses than something intended to lodge itself in your head: “Pump tapes out the trunk,? Too $hort / The product sell itself like Newport / Or Al Sharp, that’s New York / The soup shark, dumplings pork / Mott Street noodles out the mouth when I talk.” The beat by producer Messiah Muzik does afford “Shark Fin Soup” a 2013 edge, featuring some of KA’s ambient sample swirl and the underwater-and-on-acid bubbling of Ryan Hemsworth.

B L A C K I E, “Girls in the Front”
A cult rapper even by who’s-even-famous-or-maybe-everybody’s-famous Internet rap standards, Houston noise enthusiast B L A C K I E was doing the Death Grips thing long before Death Grips, and if you’re willing to trust what the hyper-sincere and uncompromising MC said in this Village Voice interview (and why wouldn’t you?), he was apparently something Kanye West was listening to while making Yeezus. “Girls in the Front,” off his new cassette Only 4 the Real, is like a reduced Rick Rubin production at three times the speed (simply by existing, it mocks Eminem’s “Berzerk”). It begins with a My Bloody Valentine “Soft As Snow (But Warm Inside)” drum-machine-kick quote; and grants an aggro rage-out a feminist slant that invites women to the pit, mocks the rap-and-bullshit loverman desperation of, say, Drake’s “Hold On, We’re Going Home” (“Baby doll, I got nowhere to go”); adds some emotional stakes to that co-dependent clap-trap (“It’s okay if I get hurt”); and veers into Valeria Solanas territory when he screams, “Cut him up, cut him up, cut him up!”

Blu & Nottz ft. Aloe Blacc, Co$$ and Definite Mass, “God Shit”
Nottz co-produced Pusha T’s “Nosetalgia” off the grandiose, G.O.O.D.-released My Name Is My Name, and this operatic banger from his Gods in the Spirit EP with Blu takes the same gritty, grimy boom-bap in God Mode approach. Mostly, this is just a ballsy, busy, big-headed beat, and it has the effect of enacting a battle between the fervid MC’s and the maximalist producer for control of the song. The result is mostly apocalyptic atmosphere, where words or phrases pop out (including some homophobic nonsense that has got to go) more than any kind of narrative or coherent message beyond “We’re all awesome.” And if you want to know just how truly strange and porous music is right now, Aloe Blacc sings in the background of this jagged thing, while also appearing on Avicii’s acoustic bro-jam EDM banger “Wake Me Up,” currently No. 4 on the Billboard Hot 100 chart.

Isaiah Rashad ft. Jay Rock and ScHoolboy Q, “Shot You Down Remix”
When the super-tight, quality-controlled TDE collective introduced Chattanooga, Tennessee’s Isaiah Rashad as a new member, it seemed like a strange and unnecessary decision. These guys feel more like a genuine rap crew — or even a family — than, say, G.O.O.D. or Maybach Music, who operate more like business ventures. So bringing in some new blood seemed counterintuitive. Would Rashad be Black Hippy’s Rockie Fresh or Cyhi Da Prynce? Is there a tax write-off corpo-rap crews get for nodding to the underground? Rashad’s appearance on their recent BET cypher — where he held his own next to ScHoolboy Q, Jay Rock, Ab-Soul, and Kendrick Lamar himself — proved his worth, though. And now, this remix with ScHoolboy and Jay Rock, the crew’s most worker-bee rappers, illustrates Rashad’s ability to sit comfortably amid some shit-kicking hood melancholia.

Starlito & Don Trip ft. Kevin Gates, “Leash on Life”
A melodramatic beat that sounds like Linkin Park remixing Childish Major’s “U.O.E.N.O.” adds even more pathos to this touching, insightful track that touches on the ways that white privilege even extends to spree killers (“They shootin’ up movies, they shootin’ up schools / Young black fools ain’t the only ones that suit up with tools,” Starlito reminds you), and puts its hand on the shoulders of outsiders and the downtrodden. Don Trip’s verse breaks down the creation of a school shooter: “Put yourself in his shoes / Walking away didn’t help / He got no friend to defend him / ?He’s gotta fend for his self / And he’s to skinny to fight / Running away just ain’t cutting it / ?His daddy ain’t home / His momma’s still struggling / She juggles three jobs / And get no help from the government.” Kevin Gates’ hook redirects us to the struggle of the option-less hustler.