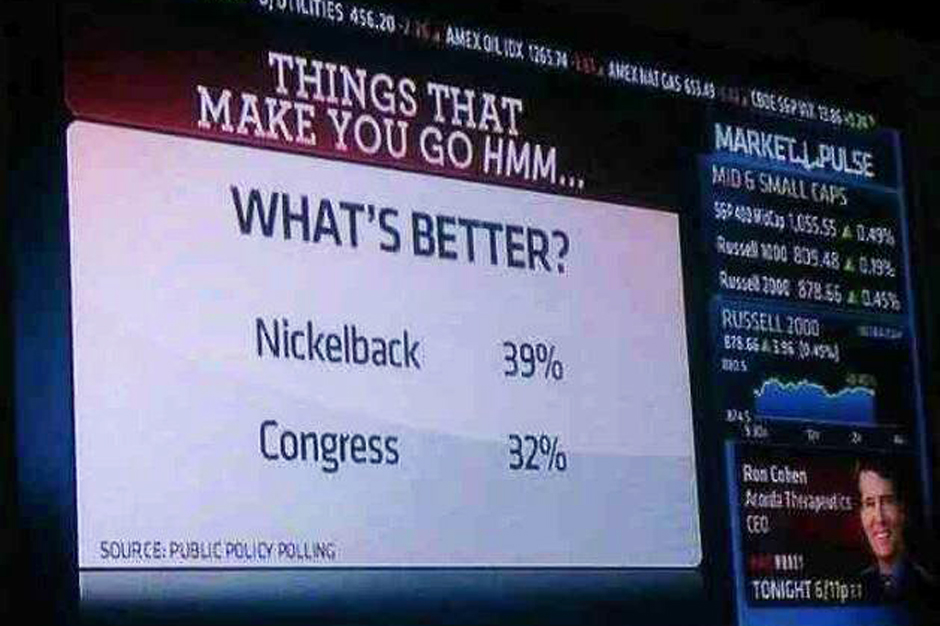 Been on Facebook recently? Have snarky friends? Heard about this whole government shutdown thing? If you answered “yes” to those questions, there’s a good chance you’ve already seen the photo above and had yourself a good chuckle. But as it turns out, if America were polled right here, right now, Nickelback would likely have a much larger lead on the United States Congress in terms of popularity. As it turns out, that photo of a CNBC broadcast concerns data published in early January. Talk about things that make you go Hmm….

Yes, as the Internet is known for cultivating an environment of 100 percent accuracy 100 percent of the time, we too were shocked to learn that the currently active meme comes from those bygone days (“Before Yeezus” or B.Y., if you will). As it turns out, those wacky folks at Public Policy Polling took the nation’s temperature on our legislators at the top of the year — a time when Congress’ approval rating was 9 percent. They then discovered that people preferred all kinds of gross things over their elected officials: cockroaches, brussels sprouts and, yes, Nickelback.

Those butt-rock giants have been the butt of the Internet’s giant joke mill forever. So much so that Fall Out Boy’s Patrick Stump wrote an essay urging the trolls to leave Chad Kroeger alone. It’s easy to understand why someone would dig up that photo at a time like this. The thing is, Congress’ approval rating dipped to 5 percent yesterday. And Nickelback are plotting a “best of” album to be released on November 19, which reminds us of how much we love to hate “How You Remind Me.” Chances are a fresh poll pitting the two against one another would look like this:

The January poll was so chock-full of terrible things that real humans liked better than politicians that you’d wonder why BuzzFeed never made a list about it. Oh wait, Buzzfeed did make a list about it. And guess what: there’s a brand new list sourced from a brand new PPP poll that finds Americans prefer dog shit, hipsters, and the DMV to what’s currently happening on Capitol Hill. But what about Bangerz star Miley Cyrus? Not-so-shockingly, Terry Richardson’s latest subject ranks lower than Congress. It seems Nickelback were granted a reprieve this time.